Why Orthodox Women Get Blind Drunk Way More Than You Think 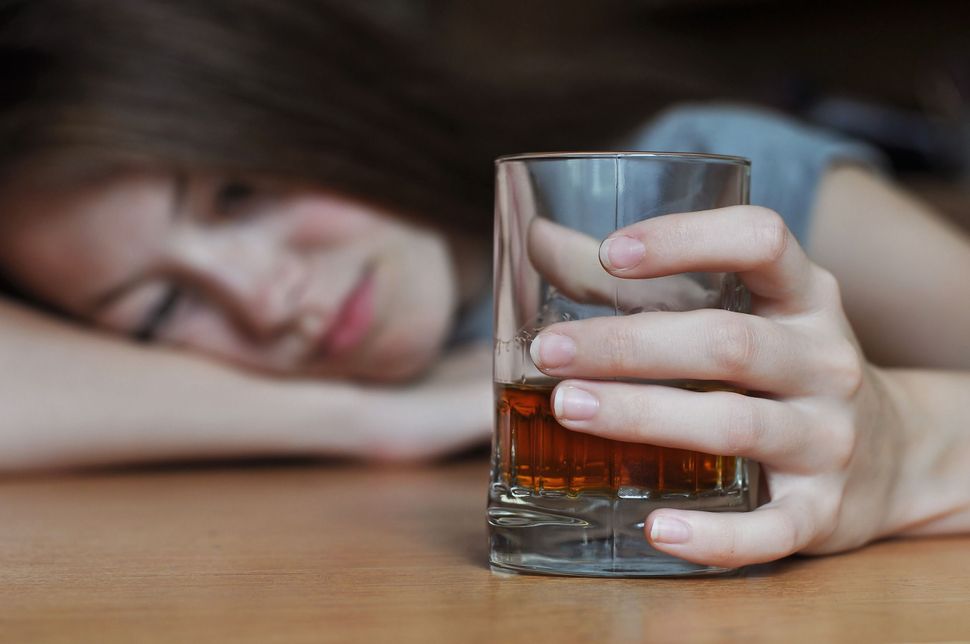 As Rachel stumbled up the stairs to her parents’ house in Midwood, I hid behind the taxi’s half-closed tinted windows, hoping that her ultra-Orthodox father didn’t see me. He probably would have suspected the worst. We hadn’t fooled around but it was just as bad: Rachel had gotten dangerously drunk.

I’d gone out with some friends to a bar. When I arrived, Rachel, a classmate of my younger sister, was already into her third drink. On the cusp of her 22nd birthday, she was legally an adult. But she grew up ultra-Orthodox and sheltered, so inexperienced in many facts of life.

Her waning observance meant that she had complicated sexual ethics, involving terms like “third-and-a-half base.” Relationships were complicated, especially since she had to make new rules out of the all the prohibitions that she’d left. It was clear from our conversation that she might need a refresher in the science of birds and bees.

After her fifth drink, my friend and I decided Rachel needed some food to absorb the alcohol she seemed to effortlessly down. We walked to a nearby Kosher restaurant and ordered some appetizers. Rachel talked more about her complicated sexual rules. After we finished, they left the restaurant as I paid the bill. Two doors down, I found my friend standing over Rachel, who was sitting on the wet slushy sidewalk. She leaned against a dumpster, legs in the air. Drunk and only semi-conscious.

Even though I was raised Orthodox, I was lucky to grow up with easy and enthusiastic access to alcohol. My parents made drinks for me as a child. The liquor cabinet was never unlocked and within easy access in our living room. As a five year old, as I would clear the empty wine bottles from the table, I swigged from them, the dregs making my tongue ever so sweet. My parents laughed. I witnessed my parents drink in moderation. I grew up with adults who taught me that alcohol and responsibility could go together. I didn’t know Rachel’s exposure. I knew I had to be the one to take charge and take her home.

We woke her up and started ambling to the subway. It was soon clear that we wouldn’t make it. Rachel wandered off from my friend. A second later, she was down again, this time seated on the stairs of a brownstone.

I called an Uber, as I was the most experienced person there (at least with Uber). I hated being the adult, but I had no choice.

The black cab dropped her off at her parents’ house, as I hid. It would have been, at best, an awkward encounter, with her very religious father probably assuming that I intentionally plied his daughter with alcohol. The evening had enough excitement. Luckily, she made it through the door.

After the cab dropped my friend off, I walked home in the rain, thinking about a number of unimaginable scenarios that could have played out while she was on the ground: drunk, vulnerable and helpless. She’d engaged in potentially dangerous activities without the necessary knowledge to protect herself.

Drinking, like sex, can be fun but also potentially dangerous – especially for women. Some 25% of American women have experienced sexual assault, including rape, according to a recent NIH study, “Approximately one-half of those cases involve alcohol consumption by the perpetrator, victim, or both. Alcohol contributes to sexual assault through multiple pathways, often exacerbating existing risk factors.”

Consider this: while 25% is an estimated figure, this is in the wider population, where young adults receive a modicum of sex ed. Even Catholic schools have progressed beyond only chastity. Over the last few years, there has been a growing awareness of campus rape. Colleges are, at least in theory, a safe environment. There is structure and rules and guidelines. And yet, according to a 2009 study, by the time they are seniors, almost 20 percent of college women will become victims, overwhelmingly from a fellow classmate.

Imagine the statistics from the Orthodox population, which doesn’t adequately educate their youth, who become adults and binge-drink beyond the safety of a campus, with a college medical team and mental health services. Orthodox and ex-Orthodox members are all the more vulnerable.

The recent film One Of Us explored the lives of three formerly Ultra-Orthodox Jews. Ari, a young man, struggled with and overcame his substance abuse. His life would have been improved with a healthier exposure to alcohol and substances.

The Orthodox community could learn from Catholic schools, where attitudes are changing. The Vatican has taken a more liberal stance towards sex ed. Rabbis should not preach that boys are evil and that girls are a distraction from Torah, like many learn in their high school and gap years in Israel. We need not the preach of abstinence, but one of informed decision making.

My evening with Rachel was not an isolated incident.

The proper education of men would inform them of the somewhat trickier elements of consent. Education would empower women to communicate their wants to their partners. A key takeaway from the epidemic of campus assaults, besides the level of rampancy, is that there’s a strong correlation between alcohol and sex. I am not victim-blaming: Don’t rape or assault people.

But the Orthodox community needs an educational framework for healthy behavior. In shaping young minds and bodies, we need to have them grow to be able to partake in alcohol consumption in a planned way that is safe. Likewise, young Orthodox men and women should be able to engage in sexual activity in deliberate manner that allows for safety and enjoyment. Both go hand in hand. A lack of alcohol ed can lead to dangerous sexual behavior. And vice versa.

And everyone should learn healthier relationships between men, women and alcohol.

Why Orthodox Women Get Blind Drunk Way More Than You Think