Talking to Matt Mira and Doree Shafrir is like immersing yourself in a warm bubble bath with a glass of wine: it feels soothing and buoyant at the same time.

That’s probably how their tens of thousands of listeners feel when tuning into their podcast, Matt and Doree’s Eggcellent Adventure about their fertility journey trying to have a baby.

Well, it’s about that, but the hour-long podcast, which began in October 2016 and is now past episode 66, is about many, many other subjects: for example, the last one of 2017 was about Hanukkah (and how they had two menorahs next to a Christmas tree), book clubs (and why Shafrir wasn’t keen on joining one even though she felt like she needs to be social), dieting (and how Matt kind of wanted to lose weight) and how daylight savings time effected it (and Shafrir, who was pretty down in the dumps.)

Yes, of course they discuss about what they’re up to in their IVF treatment (taking a break and getting ready for another IVF retrieval); they also take calls from listeners, like from one couple who decided not to do it because it was too expensive and another woman who couldn’t handle her friend’s pregnancy.

But there’s a lot of time to fill in an hour of banter, even with advertisements. (I tell you, I was so taken in by them that they convinced me to buy a really expensive children’s book even though I’m on post-Hanukkah no-spend budget.) But that’s Matt and Doree for you, comforting and convincing, laughing and challenging each other — even in this most challenging time in their lives.

They started fertility treatment half a year after they married in October 2015.

“I told you from the get-go, ‘I bet you’re not going to get pregnant. Because I think I have a terribly low sperm count.’” Matt tells Doree on the first episode. 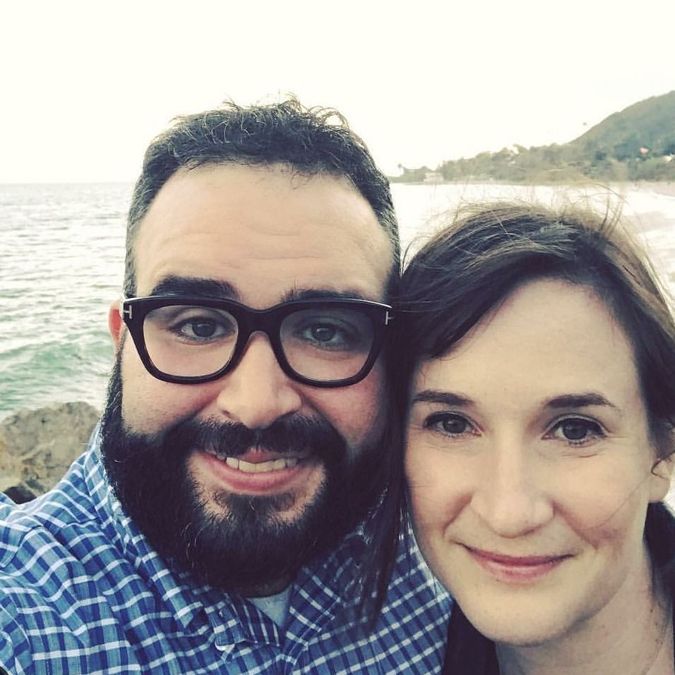 Doree: I remember you saying that.

Matt: Hello, I said that! There’s a fun thing you’ll learn about Matt Mira — he’s right a lot. I’m like an oracle or a soothsayer.

They debate his wrongness and take a look at their dog, they’re walking outside.

Doree: But I was like, well, I’m kind of old and I’ve never been pregnant

Doree: I’m just wondering what percentage of men have gotten someone pregnant by mistake?

Matt: That’s a great question – and some men don’t know ’cuz the women go on their own and take care of it – it’s their bodies, pro-choice this is a pro-choice podcast.

They talk about how they support Planned Parenthood, invite the organization to sponsor them, the name of their new podcast, and their email, how Doree’s a planner and it drives Matt crazy and why they started IVF, and Matt going to a urologist that wasn’t covered by insurance and Matt’s semen analysis…

You get the point – they don’t get to the point so quickly, but maybe that’s sort of the point: “So much of IVF is waiting — it’s out of your control,” Shafrir tells me, noting that listeners tell her: “Oh thank you, you’re showing how long it takes, just how frustrating it is,” she says. “Even the downtime is how the IVF process really works.”

There is plenty of media telling the millions of people suffering from infertility how IVF works (often run by fellow Jews) — from websites with essays like Pregnant-ish to websites with statistics like Fertility IQ not to mention tons of books.

So why did Matt and Doree have decided to go with a podcast?

“I’ve been a writer for a really long time and there’s something about the power of voice that’s really amazing,” Shafrir says noting that even though she works at Buzzfeed, which has a more substantial reach than ‘Eggcellent’s’ listernship. “I hear from so many more people from this podcast than I did from any Buzzfeed article I ever wrote,” she says. “To me that says it’s really affecting people.”

Podcasts can be really affecting, and the couple should know: Mira works on the famous Nerdist podcast and as a writer on The Goldbergs on ABC. Shafrir, a novelist Startup just stared a new wellness podcast, Forever35, with Kate Spencer (“it’s not going include many discussions of uteruses and I look forward to that,” Shafrir says).

“Some of my favorite emails are young and have no interest in having a baby, and they ask questions about their own life,” Mira says, recalling an email they got about life balance from two chefs who never had time to see each other. “I believe we told them it wasn’t looking great and she should get out,” he says. The couple did break up.

“We can tell people how we balance our lives, Mira says, and Shafrir notes that they’ve instituted a sacrosanct date night for their busy schedules (Mira is often in New York to host After Trek, the Star Trek Discovery after-show).

“We don’t have that rule because–” Shafrir says.

“—We usually get that out of the way on the podcast,” Matt finishes her sentence.

In fact, doing the podcast often helps them through this painful journey.

“It sort of make it easier, we’re allowing ourselves to process it very vulnerably as it happens, which at first felt like it was going to be scary and has actually been kind of great,” she says, remembering that after she had two failed transfers and unexpected surgery, “at every turn people are supporting us and offering our own stories and that is very reassuring.”

Matt: “When something bad goes down at least we will have something to talk about this week.”

Speaking of bad, a lot of bad stuff happens when you are trying to have a baby. How does faith play a part in their journey?

“I find that our listeners’ faith plays into it more than our own,” Mira says. Shafrir is Jewish and Mira is Catholic, even though people “assume” he’s Jewish.

“I tried to convert when I was young — I thought you couldn’t go into comedy unless you were a Jew,” he says. He told his mother he wanted a bar mitzvah and when she got him some books (Shafrir: “Didn’t she get you ‘Judaism for Dummies’?”) he realized, “Hey, wait a second, this is just the first half of Catholicism!”

Needless to say, Mira didn’t have the bar mitzvah. “I really just wanted those sweet checks,” he jokes.

“If and when I got pregnant, we’ve talking about doing it through pregnancy, and then we’d have to shift focus after baby,” Shafrir says, explaining that she probably doesn’t want to do a parenting podcast. “We’ll cross that bridge when we come to it,” she says.