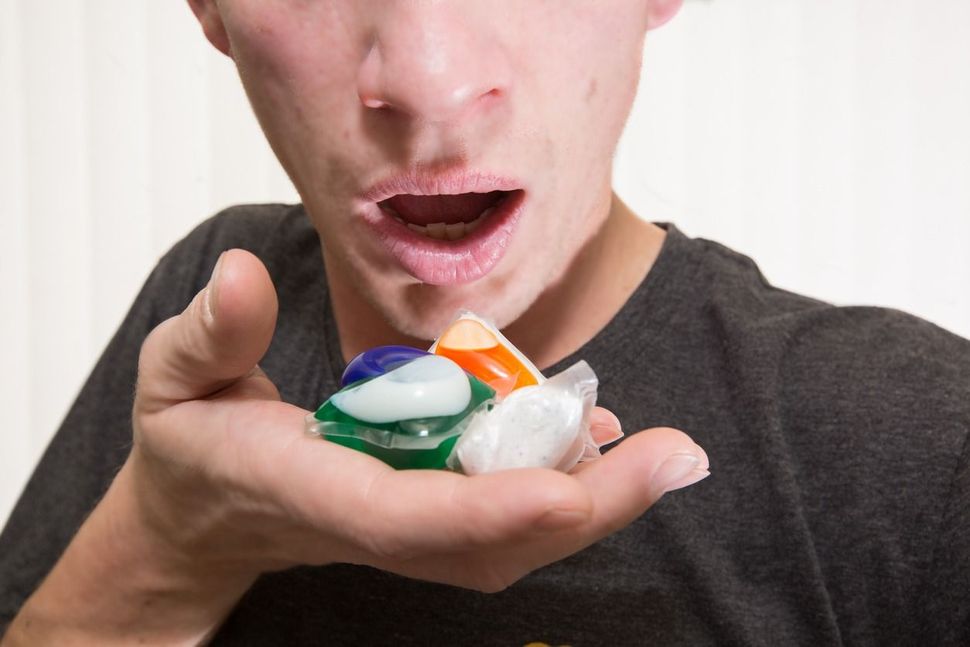 There is an explicit biblical commandment against doing stupid s–t that endangers your health. Genesis 9:5 states, “But for your own life-blood I will require a reckoning: I will require it of every beast; of man, too, will I require a reckoning for human life, of every man for that of his fellow man,” and the revered biblical commentator Rashi understood this verse to be a prohibition against suicide.

According to the American Association of Poison Control, “The ‘laundry packet challenge’ is neither funny nor without serious health implications,” said Stephen Kaminski, AAPCC’s CEO and Executive Director. “The intentional misuse of these products poses a real threat to the health of individuals.”

Just because you can find Tide Pods at most kosher grocery stores does not mean that you should eat them. And if you do, as the Talmud states in Shabbat 32a: “Leave the drunk, as he falls on his own.”

Obviously, you’re not supposed to eat laundry detergent. But why are Tide Pods listed by the Orthodox Union as kosher for Passover and all-year round?

Even most ultra-Orthodox authorities don’t require kosher certification for products that aren’t fit for human consumption and are gross enough that even a dog wouldn’t eat, like laundry detergent. So even though some surfactants are derived from animal products, because the resulting mixture is inedible, it is not a problem to use on your laundry — or even if it spills onto your kosher dishes. Some people are strict, though, so organizations often certify detergents that have strictly non-kosher ingredients.

If one is foolish enough to eat a Tide Pod (or other inedible food), then it would technically need to be comprised mainly of non-kosher ingredients in order to be kosher for your own personal consumption (see Shulchan Aruch Harav, Orech Chaim 442:32).

If you really have a hankering for Tide Pods, one bakery has started offering edible ‘Tide Pod’ doughnuts. Maybe soon those, too, will be certified kosher.