The Yeshiva I Left Behind 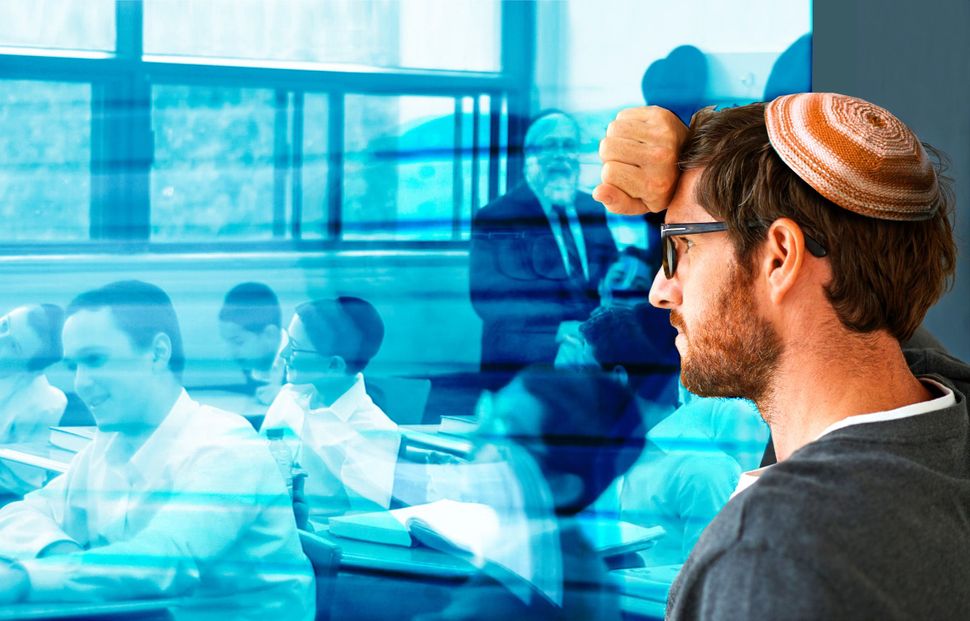 I looked through the windowpane for a good four minutes, my palm sweating on the doorknob.

What am I doing here? I thought, staring at all those men, poring over their books and talking with their study partners. I couldn’t face them.

Peeking through the corner of the small window on the door, I felt like a prisoner looking out of my cell. Trapped. But I had a choice this time. I didn’t have to walk in. I could turn around, and this would be a forgotten memory. What am I doing here? I asked myself again, again looking down at what I was wearing. I was wearing a black T-shirt, an open plaid flannel shirt over it, and jeans.

I felt the thud-thud-thud in my chest but pushed the door open anyway, walking into my former yeshiva study hall.

I was there to see my old rabbi.

My three years at yeshiva seminary after high school were not my favorite: I had no friends and felt stifled. While in yeshiva, I pined for the business and culture of Manhattan. The sprawling campus, situated on a former plantation, felt confining; I would escape to the local library for some personal space.

But despite the uncomfortable moments, there were educators who cared for me and gave me their time and their heart. Rabbis who offered advice solicited and unsolicited, who listened patiently as I railed against the system that they were proud members of. Rabbis who helped me expecting little in return, knowing that I might one day leave without turning back.

I returned only once, about two years ago. It was a whim, after the grandson of the head of school, the Rosh Yeshiva, visited me in New York and suggested a road trip back to our old stomping grounds.

Back then, I played by the social rules that govern the rigid environs of the yeshiva world: I dressed the part, donning a white shirt and dusting off my black hat for the occasion. At a Shabbat meal with the Rosh Yeshiva, I bowed my head deferentially at the proper times.

But here I was now, clad in a red flannel plaid shirt, sneakers, and worst of all, blue jeans. My shirt was Christmas-colored, purchased on the Jewish Christmas, a.k.a. December 26th when everything goes on sale. But the jeans were the worst part of my wardrobe. They were the pants of the goyim. For the purposes of fitting into a select few neighborhoods in Brooklyn and Portland, my outfit worked well; with my gray beanie as a cherry on top and I could pass as a New School MFA student or your local barista.

But here in Yeshiva, everyone was wearing black and white.

About 600 men in the large, brightly lit, loud study hall. I wasn’t ready for all eyes to be on me. I wasn’t prepared for the stares, the whispers, the macher who arrogantly approached me to introduce me to the yeshiva and offer to show me around. As if I wasn’t here for many years, which admittedly shaped a part of myself. As if I wasn’t religious. As if I didn’t donate money to the institution so that he would be able to sit and study and to look down upon people like me.

What would people say when I walked in dressed goyish? Some yeshiva graduates leave the fold, which is expected. But if I’ve left, which is only half untrue, why have I returned now?

I feared that my old classmates and rabbis discovered my writings in outlets like this one, my Facebook posts, or my live Moth stories, finding my views to be too heretical, too liberal, anti-Orthodox. Now, I was vulnerable, because I was on their turf.

I walked in and saw Mordechai, a married member of the Kollel. We were never too close, as he was older and lived on Yeshiva Lane, the campus housing for a select group of people who want to raise their children cloistered in the world of Yeshiva. He sometimes sent me a snarky Facebook message, offering unsolicited advice about growing thicker skin to those in the ultra-Orthodox world who attacked my views. Broad-shouldered and blonde, he didn’t tower over me like he used to — but I still feared his goading.

He smiled and stood up, closing his book.

“How are you?” he asked, his six foot three frame towering over me.

“Thank you for bringing some color into this place.”

We laughed. And that’s how the rest of my two-hour visit went.

I visited my rebbe, and my wardrobe wasn’t even acknowledged. It was just like old times. He leaned back in his chair asked the usual questions about work and my marriage plans. In our 30 minutes together, he had four phone calls. He never asked about my study habits or religiosity.

No student or teacher approached me with the questions I feared, like “Are you lost?” or “Did you put on tefillin today?”

I saw old classmates, all of whom were married with three or more children. Everyone I met that day was gracious and kind, and seemed genuinely happy to see me. A classmate “Baruch hashem had three children.” Another one “got married last year.”

As my Uber took me to the airport, my brain played “what if” games:

What if I had stayed behind? This is not my community any more, but seeing the old hallways and classrooms brought back mixed memories. Yes, I wished my old classmates’ judgments, though unintentional, didn’t hurt me as much as they did.

But for a second, Yeshiva Lane looked inviting. Its sense of community, so tightly-knit, the way people there simply belong. I felt a pang of regret for leaving this community and its security years ago. I wished I could have connected better with my peers. Reflecting on my visit, I was struck by the kindness of my former classmates, by the way they were interested in my life, even if they might not understand it.

Throughout my visit, I was waiting to be outed, to receive snide comments about my appearance and life choices – but the response was overwhelmingly, shockingly, warm.

They looked past my appearance. But I, I admit, did not look past theirs.

The Yeshiva I Left Behind