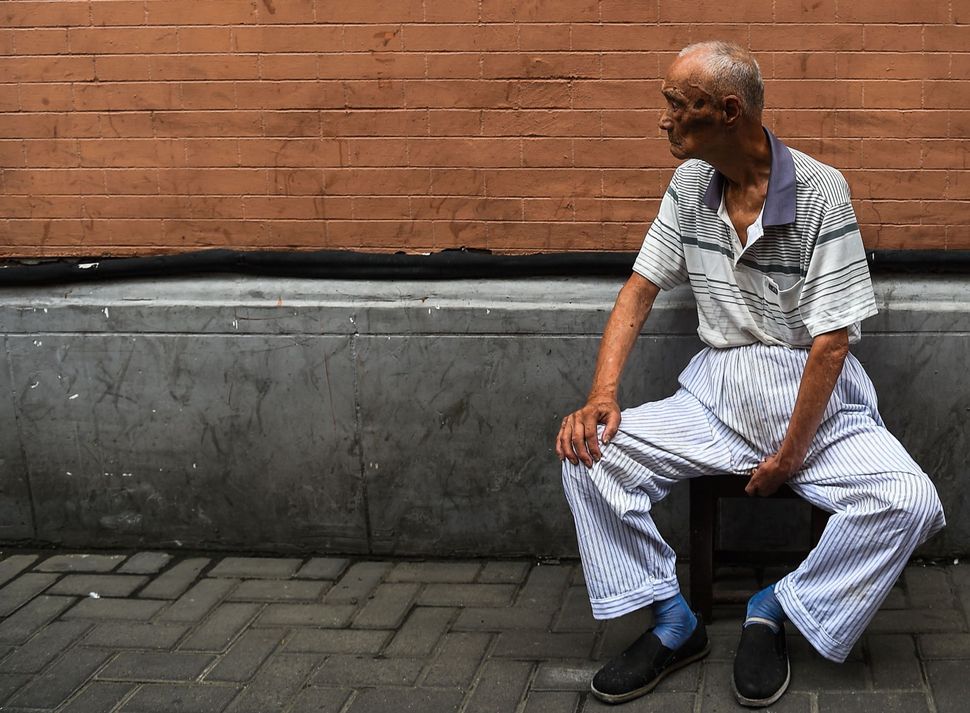 Tikkun olam can be a nebulous term. Caked in abstract notions of “repairing the world,” the phrase is maligned by some as often being in practice nothing more than a motto hippy-dippy Jews recite to make themselves feel good. After all, how is the “world” actually being repaired?

Danny Dilulio’s adoring fans in Chinese nursing homes will tell you how.

Though terribly underreported or discussed even internally, China’s decades-long One Child Policy has created an unprecedented humanitarian crisis in elder care. The home of roughly 220 million people above the age of 60, the country, Dilulio explained, “is currently undergoing the most dramatic demographic shift in human history.” That number is expected to more than double by 2050 — and China’s youth are woefully outmatched to carry the burden. With the one-child policy only ending in 2015, children are often left to care for their parents and four grandparents — who tend to live in far way rural areas of China — by themselves.

Though the Chinese government and businesses have tried to supplement elder care services, the crisis far exceeds China’s efforts at this point. And so, a society possessing the deeply ingrained tenet of “filial piety” has seen many of their elders left in disreputable conditions.

When Danny Dilulio was a first-year student studying Chinese public law at Yale Law School, he came across this crisis — and what little work was being done to solve it — and it affected him deeply. Coming from a Jewish and Italian background, Dilulio’s childhood relationship with his elders informed his own identity. He fondly recounted his great-grandmother pinching his cheeks in a walker as she handed him Hanukkah gelt.

He was particularly close with his Italian grandmother, who moved in after his grandfather passed away. “I’d go to her bed when she would go to sleep,” recalled Dilulio. “I was in some ways the greatest psychological support for her because I spent the most time with her.” Dilulio’s grandmother would beckon him to “serenade her” on the guitar and piano as a child. “When she got a bit older and we had to face the decisions as she deteriorated — like should we put her in a nursing home — I later realized these are the same challenges that China faces, but they face it on a more severe level.”

Dilulio says that he imbibed the message of Tikkun Olam from his great-grandmother, who fled Russian pogroms. “The Catholic notion of social justice has always been on an individual level, but I viewed Tikkun Olam on a much larger scale,” explained Dilulio.

Dilulio traveled to China to further research the elder care issue. In the poorer areas he visited, elder care facilities were more than substandard. He described entering what looked like a converted hotel and being overwhelmed by the pungent smell. Six beds were crammed in one room large enough for two beds “at most,” joined by ten other rooms like it all sharing one bathroom.

“There’s not nearly enough workers on hand, and there’s almost no form of engagement with the residents whatsoever,” said Dilulio.

Beyond its scope, a major contributor to the crisis is the stigma surrounding professional elder care in China. The traditional family structure of several generations living in one house has begun to disintegrate in a modern China demanding mobile young workers.

However, it is still perceived as embarrassing for a senior citizen to not be cared for by family members, with their adult children or grandchildren similarly shamed as “undutiful.” By associating with this “shameful” arrangement, elder care workers are seen in China as low status — even as the historic age imbalance places a tremendous demand on them. Thus, the only people in China who work in elder care are often underqualified and underpaid, with high turnover rates in the industry.

Researching how the robust Chinese apparatus made huge strides in solving systemic problems such as corruption and pollution, Dilulio knew it was possible for China to address the elder care issue, too. If he could just get the nation to move past this elder care stigma, he thought, maybe he can mobilize the Chinese government and people to forcefully act.

Dilulio turned to music. He created a music video, featuring a song in Mandarin that he wrote, entitled, “Always Take Care Of You”. Though communicated in Chinese terms, the song’s implicit message certainly resonates with guilt-ridden Jews around the world: ‘After everything your parents did for you…’

“My idea was to have as many people see it, cause as many tears to drop and perhaps for people to call their parents for the first time in a while,” said Dilulio. 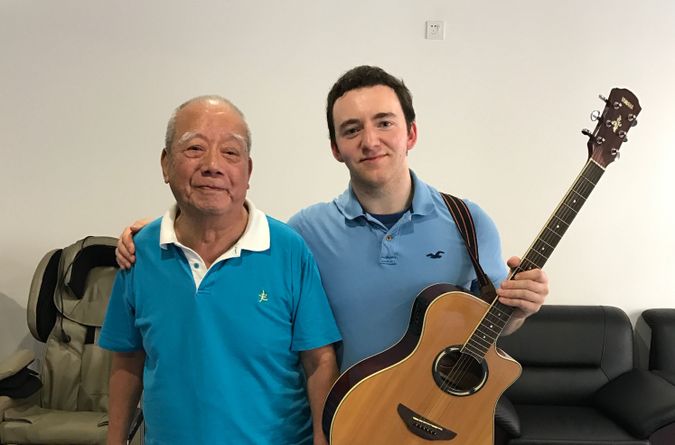 At the U.S.-China Eldercare Summit Forum in 2016, the largest gathering yet of private and public sector figures involved in the issue, the “Always Take Care Of You” music video premiered. Kleenex (or the Chinese version of it) was in high demand in the auditorium by the time it finished. Dilulio noticed the highest government official in attendance, in austere uniform, crying.

Working with Chinese government officials and academics, he commenced the “Always Take Care Of You Tour,” performing as “Danny Du” at elder care facilities across China. 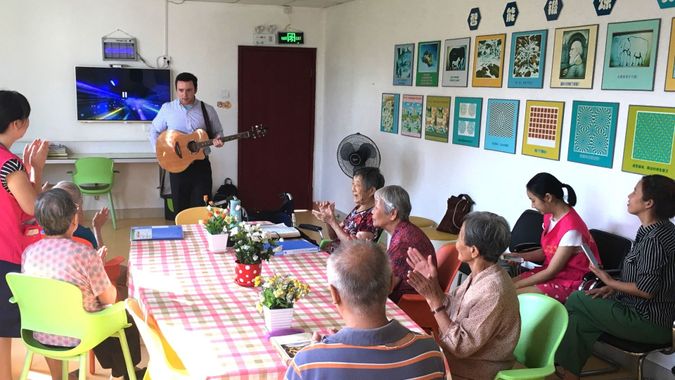 “My Italian grandmother was really the first ‘audience’ I ever played music for, so in some ways I’ve always been at home playing songs for the elderly,” said Dilulio.

Walking into dilapidated facilities, Dilulio’s performances roused sometimes “half-dead” residents through the power of music. A 90-year old stroke patient, known to speak or move very little, came to life one afternoon to sing for Danny Du the train tunes he had sung on the tracks for decades before. A woman hugged him and told him in broken English, “I know your heart is with the Chinese people.” 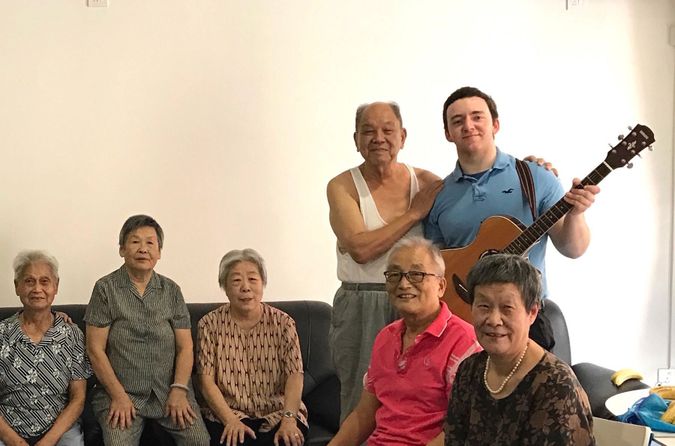 “Music is kind of a different language,” commented Dilulio. “It allows for a deeper connection. I think performing for them — performing their favorite songs or original songs about them — demonstrates where your heart is, not where your mind is.”

Dilulio’s challenge to completely change how a country of 1.4 billion people views elder care is considerable, but that is the scope Tikkun Olam tasks him with, Dilulio believes. Over 10 prominent Chinese media outlets, including CCTV, Youku and Sohu, have already covered the phenomenon of the “American songwriter” that’s “promot[ing] China-U.S. elder care cooperation.” His music video has circulated in China’s 40,000 elderly colleges as well as China’s super-ministry responsible for elder care.

After graduating from Yale Law School, Dilulio will be a scholar at Tsinghua University in China researching the issue further. He plans to resume performing on the senior circuit and transform what is viewed in China as a hush-hush issue into a nationwide responsibility.

To witness Dilulio’s Tikkun Olam in action, check out his music video below. And don’t forget to call your mother afterwards.

Steven Davidson is a freelance journalist who previously worked at the Forward and has written for Narratively and Salon, among other outlets. You can find him on Twitter @sdavidson169.