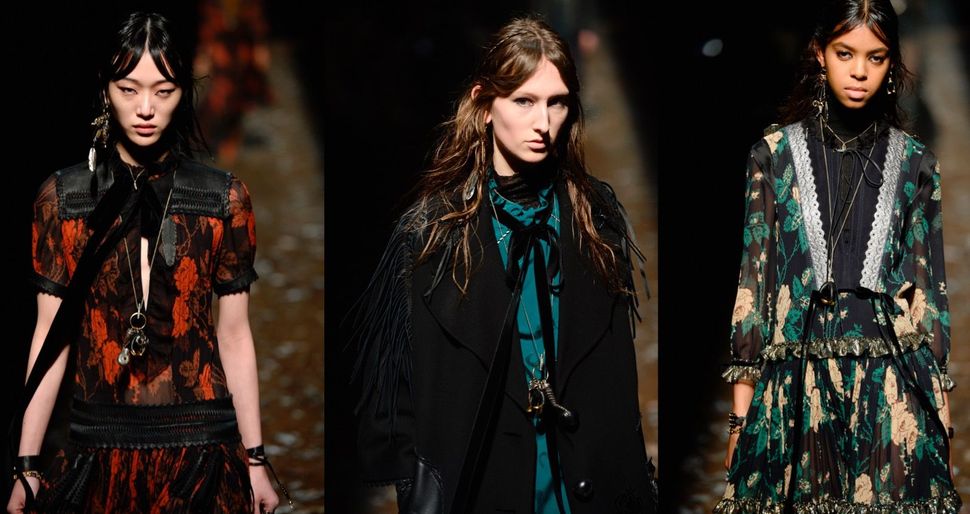 There are three Jewish brands that are quintessentially American: Ralph Lauren, Calvin Klein and Coach. These three brands live and breathe American “style” — an archetype that glorifies Americana: Flags, cowboys and casual sportswear. But where Ralph Lauren has remained dutifully tied to this idealized vision of America, both Calvin Klein and Coach have subverted this vision into something darker, even macabre.

And that’s why it wasn’t at all surprising that the set for the Coach 1941 show was transformed into a dark, eerie forest: There were spindly trees with branches that reached up through a billowing mist; dead leaves were strewn across a dirt-covered floor; thick old-fashioned televisions with flashing static were encased in square vitrines and scattered about. It was like the opening scene of a Criminal Minds episode, right before it cuts to the shot of a bloodied, disheveled woman running through the woods to escape a serial killer.

In a lot of ways, the vibe was distinctly similar to the collection shown a few hours later at Calvin Klein’s runway show. Both had a prairie sensibility with long, patchwork peasant dresses, calling to mind America’s heartland in a dark, subverted fashion.

But Coach was more overt in its darkness. Leather featured prominently (Coach is a leather goods company) in lace-edged cuffs on the prairief dresses and fringe on coats — as in a black wool coat with velvet floral embellishment. There were a lot of studded embellishment, which was further underscored by the jagged edges of the jewelry encasing the models’ ears.

But the darkness was softened by romantic detailing: the sheer ruffles around the neck of a dress; the black velvet neckties which were seen in many of the womenswear looks (this was a menswear-womenswear combine show); feminine silhouettes and flowing silks. Indeed, barren trees in a misty forest is also a frequent cinematic setting for romantic horseback rides.

It’s worth it to note that both Stuart Vevers and Raf Simons (the creative director at Calvin Klein) are not American. Perhaps their foreignness allows them to see America’s flaws more clearly, even objectively: They can point out the rottenness that’s been eating at our core and make clothes that speak to our moroseness over that rottenness.

But, that’s not entirely why Vevers and Simons took such a radically different approach from Lauren: out of the three, Ralph Lauren is the only original designer. And as such, it’s easy for him to fall into the trap of creating the same clothes over and over again (although he redeemed himself this season with Monday’s excellent nautical-themed show). But a new designer can look at a brand’s core identity and be able to interpret it in away that feels fresh; relevant, even.

Coach as imagined by Vevers for Fall 2018 was just that: Darkly romantic, salable and thoroughly modern.