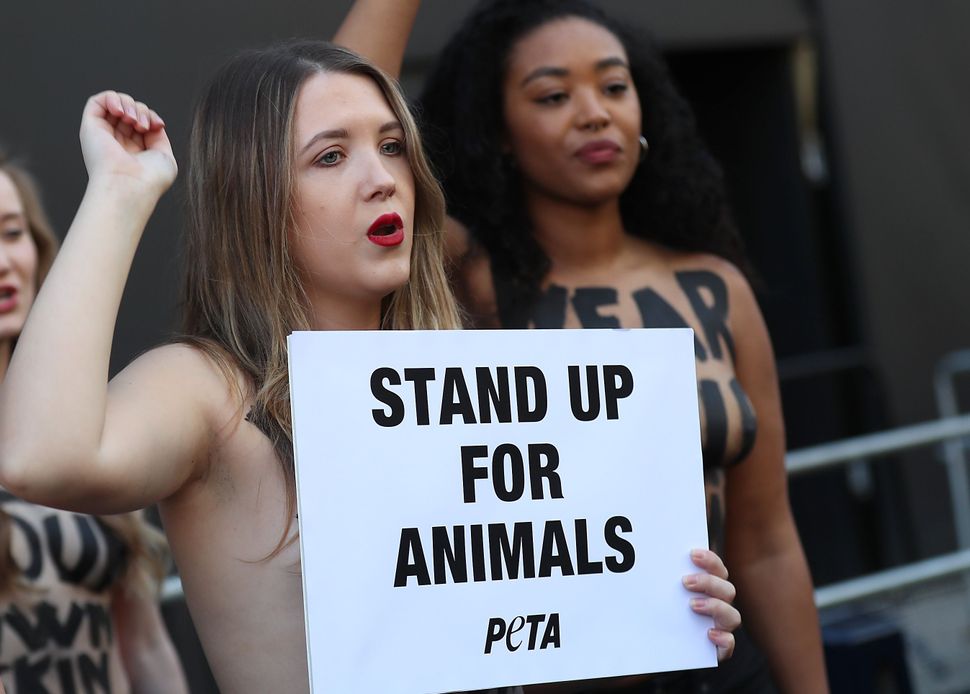 Yesterday, as a model clad in a camel coat with slashed paint print walked down the Mary Katrantzou runway, an anti-fur protester came onto the runway, walking straight toward the model.

She held her iPhone held aloft, as if to document her protest, and chanted, like the Septa Unella as she accompanied a naked Cersei Lannister through the streets of King’s Landing in Game of Thrones: “Shame on you. Shame on all of you.”

Which was pretty awkward, seeing as Mary Katrantzou’s collection did not actually have fur in her collection. The only fur in sight was faux.

Anti-fur protesters have always been a part of the twice-yearly spectacle known as “Fashion Month.” The level of disturbance has ebbed and flowed — some years, their presence doesn’t even merit a mention in the fashion press. But, recently, their tactics have become increasingly more aggressive and disruptive.

In September, during the Spring shows at London Fashion Week, anti-fur protests included a three-day demonstration outside the British Fashion Council’s London Fashion Week hub. Protesters screamed in editors’ ears and spat on them — whether or not they were guilty of wearing fur. In the aftermath, Business of Fashion wrote a piece explaining why these organizations felt a need to protest at runway shows that do not use fur. Yvonne Taylor, director of corporate projects for PETA told BoF:

“Animals suffer all year round, and although we take into consideration seasons and trends, it’s important to remind people year-round that wearing the skin of tormented animals should never be in fashion.”

The key word here is “remind.” Fashion has come a long way since the extravagant excess of the 1980s, where morals and ethics in fashion were treated as bonuses instead of necessities.

But now, fashion has evolved significantly. It officially cares about ethical behavior like sustainability and factory conditions — not just in luxury, but many fast fashion chains have pivoted somewhat to cater to Gen Z — the young, 13-24 year-old market that cares about those issues. In September, the Huffington Post reported, “We are finally witnessing signs of consumer interest in sustainable fashion, which apparel corporations are responding to.”

Ethics in fashion has grown to include a variety of issues — and anti-fur sentiment is just one of many. It has, in recent years, lost its monopolistic hold on progressive fashion as other issues, like environmentalism and workers’ rights, became hot topics of their own.

The early 2000s were PETA’s prime of hijacking fashion shows to protest using fur. One notable example was at Christian Dior’s Fall 2003 runway show, when a PETA activist jumped up on the raised platform and struggled to unfold a small paper that had “Fur Shame” scrawled across. The model blithely pushed her aside as two suited guards pulled the protestor off the runway.

The problem with this kind of anti-fur activism is its inability to engage. Its purpose was to spark press, with the hope that somebody would see the truth and join along. And so they’ll spit and hold homemade signs; they’ll throw red paint at little old ladies wearing mink coats; they’ll hijack runways, screaming in attendees faces.

But none of it causes any real industry change.

As Grace Cook notes in BoF, “But if activist groups really want to further discussions with the fashion industry on the use of fur, they should look to activists like PJ Smith, who lobbies brands in one-on-one meetings and persuaded Armani to stop using fur.”

After years of celebrity-driven, “look-better-naked” anti-fur ads, and activists lobbying to change the cultural mindset, fur has slowly but surely become déclassé.

But perhaps what has sparked the most change have been the advances in faux fur production, which have made it easier for design houses to make the pivot to faux. (There are, of course, some luxury houses who continue to use fur, like Fendi, but it has largely fallen out of fashion.)

It is perhaps the greatest irony that the organization that creates change so often becomes obsolete because of that change. When the demand for real fur becomes so minute as to only appeal to a rarefied few, the abusive factory farms that PETA features on its site would disappear.

In its place, tiny industries that breed and kill their animals ethically would exist to cater to the few who actually cares to wear fur — which is actually in line with traditional Jewish texts, which forbid harm toward animals (in Hebrew, tzaar baalei chaim, which translates as “causing living things pain”), but which sanction eating meat and using animal products as long as the animals are killed through a specific, prescribed way.

The desire to change things and protest is often a good impulse. But once you’ve accomplished that change, then protesting the organizations that have signed on to this change is counter-intuitive. It makes them resentful and unsupportive of the stated cause. Why support organizations like PETA and tktk, who employ obnoxious and annoying tactics, when you can quietly, and slowly, be influenced by the growing number of vegans in your life, including potential customers?

As Marc Jacobs wrote on Instagram after his recent Fall show at the Park Avenue Armory, where anti-fur protests took place outside the venue: “Protesting is one thing but being abusive and aggressive to people while protesting about cruelty to animals is just plain hypocritical. #shameonme?shameonyou!”

Just as fashions change with the cycles of the seasons, so does the cause de celebre of the day. In the post-Weinstein era, fashion has become increasingly focused on sexual assault and harassment in the industry, specifically with regards to how individuals like photographers abuse their power with models. And there’s a growing awareness of the lack of diversity and representation in fashion.

So where does that leave anti-fur activists?

Sorry, PETA, but the fashion industry has moved on — fur is the last thing on our minds. Last week at NYFW, designers showcased various dystopian visions of the future or escapist dreamworlds, in reaction to America’s political turmoil of the day. The conversation has turned from mink to #MeToo, from Russian sable to Russian collusion.

After the lone protester at Mary Katrantzou was dragged off the runway, it was as if the disturbance never happened; her angry shouts faded away, obscured by the persistent bass of the music, and the models paraded on, unfazed.