Since When Have $500 Mishloach Manot Baskets Become Normal? 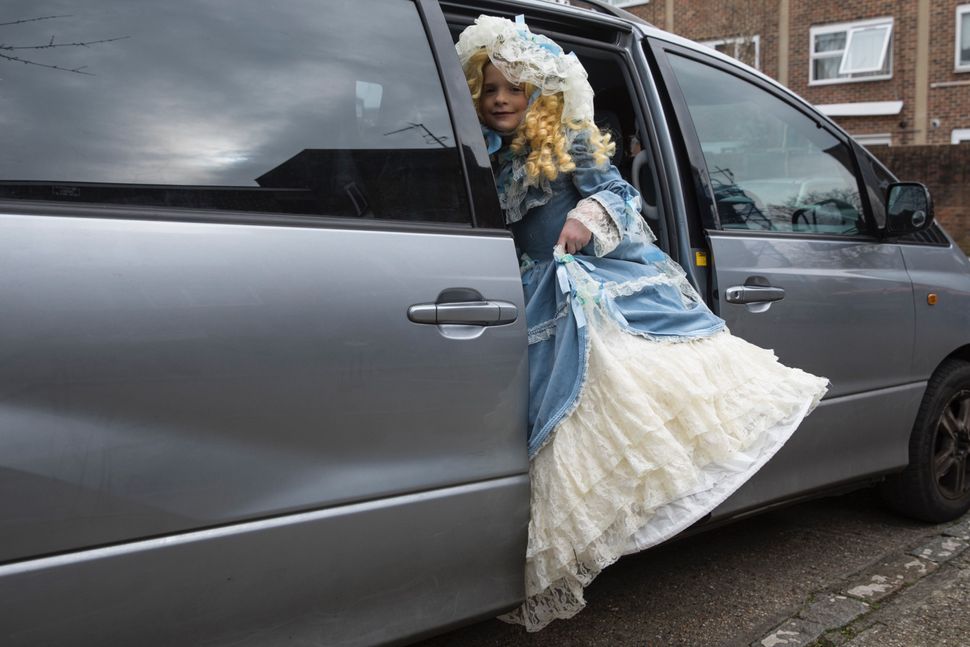 A Jewish girl in costume heads off to give gifts (mishloach manot) to friends during the holiday of Purim in London, 2017. Image by Getty Images

The moment that the Purim ads start appearing in the religious magazines, I begin to hyperventilate: How to design the perfect cellophane-wrapped gift packages of treats, the traditional mishloach manot we deliver to one another on the morning of the holiday?

And then, of course, what au courant theme should the package be — one simply can’t prepare mishloach manot without a clever theme tying the package up: A circus theme? Parisian? Israeli?

And if I’m truly a proper Jewish mother, I’d have my children’s costumes matching the theme, along with a poem that has a short and sweet Torah thought, too.

As the list grows (when you’re a rabbi’s wife, you have not dozens but hundreds of people on said list), and as the themes become more intricate, the expenses go into the thousands of dollars for even a simple gift package, not to mention the hours upon hours of preparation, shopping, packaging and delivering.

As a working mother with a newborn, I’m exhausted all the time — and the last thing on my mind is spending an entire night in a pool of cellophane and ribbons. My Facebook feed of other religious mothers hosts similar sentiments: “Can I opt out of mishloach manos this year?” I see women posting again and again in Orthodox mothers’ groups, and you can just hear the crying baby, the bursting inbox, the second dishwasher run, behind her.

Now, there’s plenty of beauty in this mitzvah — the opportunity for the creative and artistic ones among us to express themselves, the way it involves children, the lesson it teaches kids about giving, the sheer joy of running up to someone’s doorstep all costumed bearing a gift basket, and rushing back to Dad waiting in the car, ready to proceed to the next house.

But as with most things, the standards — and expectations — have gotten slightly out of control. While the mitzvah, according to the Shulchan Aruch, is to give only one gift, consisting of two different foods, the norm has become to send to just about every local friend and acquaintance. As my friend Tova Ross wrote a few years ago, this has become the “Mishloach Manot Wars”. Advertisement for mishloach manot packages in a Borough Park periodical. Image by Screenshot

If you open an Orthodox glossy magazine, you’ll find advertisements for extravagant mishloach manot baskets: Yes, you may now buy a $575 Michael Aram basket in Borough Park to send to your mechatunim(your child’s in-laws.) Or a $499 wine cart, replete with the best Israeli wines. Or, for the simpler sort, a $120 three-piece whiskey set. In the women’s sections of these magazines, you’ll find tips on how to make the Pinterest-perfect lucite box filled with elaborate chocolate bark and homemade (never store-bought) cookies.

This is capitalism meeting religion at its very best. Or worst.

It’s the very antithesis of what Maimonides wrote on the mitzvah of sending mishloach manot:

It is better for a person to increase in giving gifts to the poor than increase in his festive meal or in the sending of gifts to one another, because there is no greater joy than causing joy in the hearts of the poor, the orphan, the widow and the stranger. Causing joy in the hearts of those oppressed is like the Presence of God; as it says, “to revive the spirit of the humble, and to revive the heart of the contrite ones (Isaiah 57:15).”

One should at least match the amount one spends on gifts with a charity donation — if not more.

While the story of Esther begins with opulence — the gilded Persian palace, the tapestries, the golden vessels and flowing wine — the story ends on an entirely different note, a reminder to give matanot l’evyonim, gifts to the poor — that is, charity. The story of Esther and Mordechai is one that serves as a reminder to who we truly are: Not the drunken revelers of ancient Persia, but a people charged with altruism, with caring for those with less.

So let us put our money where our mouths are.

It’s time to change the trends and set a precedent.

This year, please don’t expect a basket from me — and please don’t get offended, either. I’ll be writing several checks to charities instead.

Since When Have $500 Mishloach Manot Baskets Become Normal?