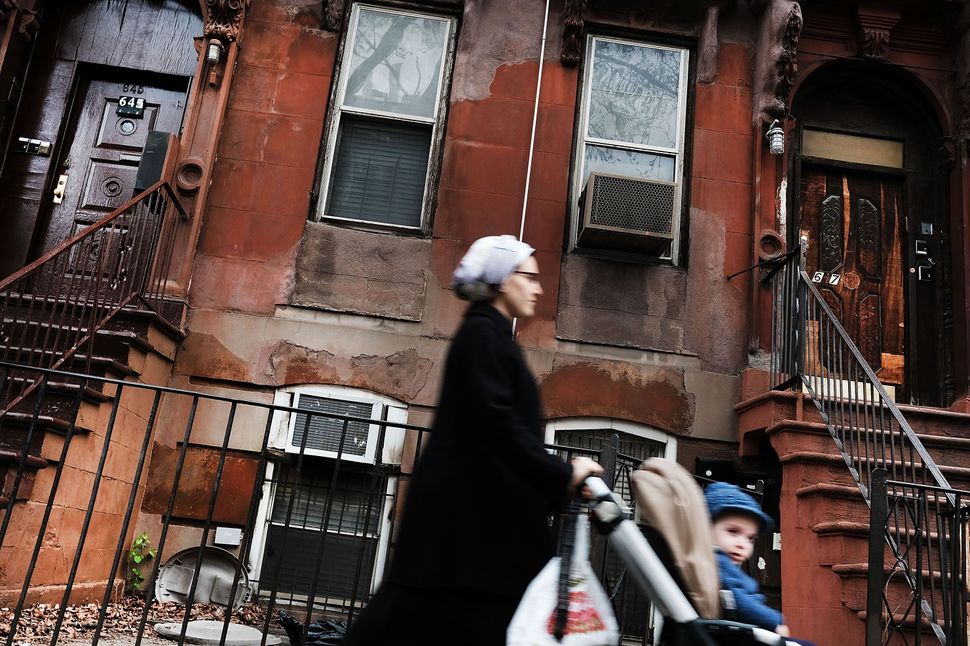 A heated conversation erupted this week after the actress Amber Tamblyn tweeted that she had nearly been hit by a Hasidic man while walking through the streets of Brooklyn’s Hasidic South Williamsburg. She described being sideswiped while walking with her baby, and seemed to feel intentionally targeted because she was a woman.

If anyone in Brooklyn near the intersection of Washington Ave and Atlantic Ave just saw a Hasidic man in a grey van try to hit a woman and her baby in a stroller as she crossed a crosswalk, honking and touching the stroller with the car’s bumper, please DM me. That woman was me.

Later she wrote: “This is not the first time a man from the Hasidic community in NYC has attempted to harm me or other women I know.”

Thank you everyone for your kind words of support today. We are fine. But this is not the first time a man from the Hasidic community in NYC has attempted to harm me or other women I know. Any woman riding a bike through South Williamsburg can attest. I hope this guy is caught.

Many people jumped on her comments for stereotyping an entire community, and subsequent headlines from HuffPo to other publications defended her against the backlash. As with many of these conversations, the nuance gets lost in the kerfuffle between those who decry any criticism of Hasidim in the name of their open-mindedness and those who see a Hasidic man’s carelessness as an intentional physical attack on women.

The reality is that there is nothing in the Hasidic male culture that would encourage a man to attack Tamblyn.

However, there is plenty of entitlement when it comes to who owns the road. Hasidic men are the drivers in the Williamsburg community; women are forbidden to drive or to ride bicycles. Here, women walk the sidewalks with their buggies, and the men drive the roads — two parallel worlds emerge. I have often, in my 25 years as a Hasidic woman and later as a tour guide, experienced the effects of men who feel like the roads are theirs.

Just last summer, as I was walking down Lee Avenue on a sleepy Sunday morning, I suddenly heard a terrible screech and clattering. I turned around. I saw a Hasidic man in a minivan drive off. A man who looked like he was maybe 18 was collecting himself from the floor while his bicycle lay nearby. I went over and asked if he was okay, in my typical hysteria: “Are you okay? Oh, my God, are you okay?” He was a sight — a young, healthy-looking guy, tanned with a T-shirt that showed healthy muscles, a little backpack on, contrasted by his crawling up to his bike with that look of a boy about to cry. He finally said something to the effect of “Just shaken, not hurt“ nodding his head as if to say “What is wrong with people?” and then he biked off.

I didn’t know if the driver knew what had happened, if he realized he had sideswiped someone, if he intentionally chose to drive on, if his sense of entitlement went so far as to feeling like he could pull out of a parking spot, quickly catch the light before it turned red, all bikers be damned. But from the many Hasidic men I know, I doubt any hurt was intentional.

Yet – when a sense of entitlement hurts others, even if unintentionally, then it warrants a larger conversation.

And this is not a problem that manifests against non-Hasidim in particular.

When I first learned to drive, as part of my preparation to leave the Hasidic community, I was surprised to learn that the pedestrian had a right-of-way. I had always imagined that the vehicles had the right-of-way, simply because they were stronger and could hurt you if you tried to go first. There were plenty of times, as a little girl, that I tried to cross the street in my Hasidic village, only for a man in his minivan to come careening around the bend, the driver honking again and again, as I rushed to run back on to the side-walk. Of course not all men were this way; but for those who were, no one in our society ever put a check on them.

I‘ll never forget one particular afternoon, when I was twenty-two years old. I found myself stranded with my baby son in a snowstorm, after picking him up from daycare, I called every taxi company (this is, remember, how most Hasidic women get around – taxis), but couldn’t find a cab. My husband was out of town and was unable to pick me up.

The snow had accumulated quickly, up to a foot, and was coming down heavy. I had no choice but to walk home. There was too much snow on the sidewalks for me to be able to push the stroller, so I walked in the road, where it was slushy and at least walkable.

There I was, freezing cold and terrified, alone in a snowstorm with my child, and a Hasidic man came driving down Forest Road, honking, and yelling out the window, “Get off the road, what are you, meshugah?” This happened twice. My milk was coming in and it felt like my body was crying; I was so ashamed, yet felt so furious for the lack of concern from these men. Yes, it was snowing, and yes, it was also dangerous to drive, but why couldn’t these men see any problems here except their own?

When I was a half a mile from my mother’s house, a Hasidic man pulled up. He was a taxi driver and had given me many rides before, and told me to hop in; he’d take me home. He refused to be paid. He dropped me off at my mother’s, where she rubbed my hands to warm them as she listened to me tell of these chayes, animals, who would zip by, yelling expletives. Such immentchen, she agreed.

As you can see, a man did give me a ride. There are many good Hasidic male drivers.

But if we are to look at the underlying culture, and ask what it produces, there is no doubt in my mind that we will find entitlement and arrogance among male drivers – simply because of the culture they live in.

When men are led to believe that the road is theirs first, that it is a place only for their big minivans, then the criticism is fair of the group as a whole, not merely its individuals.

Because the problems are not merely anecdotal, not merely a few experiences that Tamblyn complains about on Twitter – but something much larger, something endemic to the Hasidic community’s male-centric world-view.

Frieda Vizel grew up in the Hasidic community of Kiryas Joel and left the sect with her son. She is now a tour guide of Hasidic Williamsburg walking tours. Her website is www.visithasidim.com.