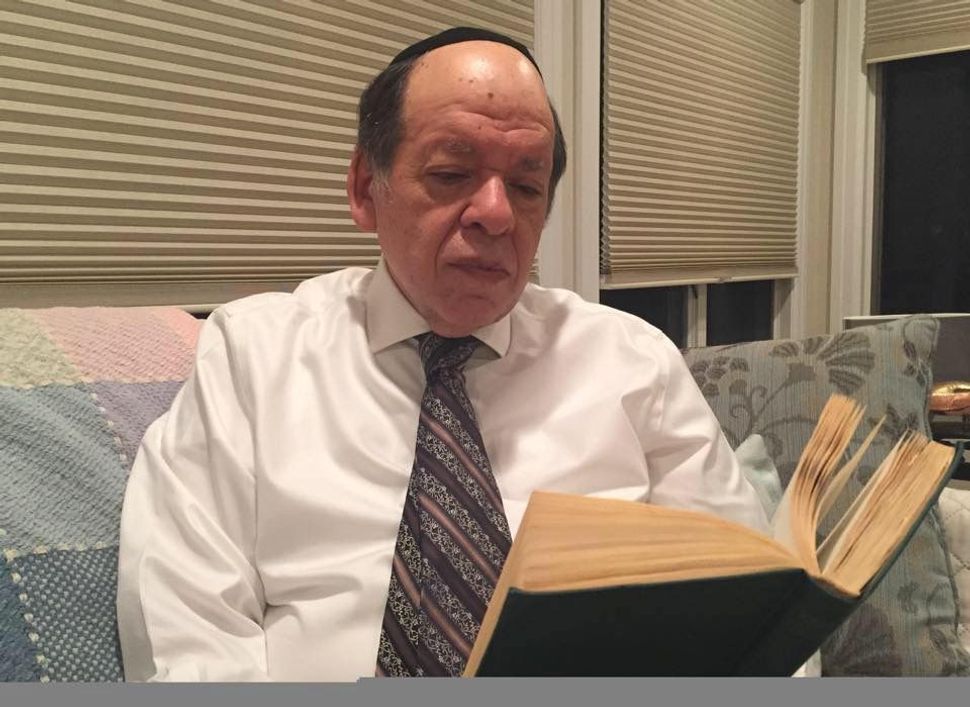 Just last week, days before his sudden death, I found myself discussing growing moral insularity of the Orthodox community — with Rabbi Ozer Glickman of Yeshiva University.

“Because I work here, I have to say something,” he told me. “Especially since everyone else is silent.” It was a sentiment he reflected on Facebook a few days later, when he wondered: “Whoever gave people the impression that tribal insularity is our highest ideal?”.

Glickman — or Rav Ozer or Rav Tony (or sometimes just Tony), as we called him was an on-again, off-again Facebook presence who had recently started the fourth or fifth iteration of his Facebook page, this time titled (in Hebrew) “The Torah Discourses Of Rav Ozer.” There, he held forth on various issues — a mix of Orthodox and unorthodox views, where he often showed great veneration for Torah and its scholars combined with great frustration over certain social trends he was observing around him.

In the Modern Orthodox community, we are constantly on the look-out for that rarest of beings, the Modern Orthodox ‘Gadol’ (‘great leader’). Yet Glickman, as a centrist and moderating presence at Yeshiva University’s RIETS rabbinical school, was an anomaly — too atypical to fit the definition of a “Gadol.” (I’ve written previously on the making of a gadol — and the factors that contribute to it here.)

For starters, Glickman had spent the better part of his career in the world of finance, as Senior Vice President and Global Head of Enterprise Risk Solutions at Northern Trust, Head of Risk Services for GlobeOp Financial Services. And even while serving as a Rosh Yeshiva at RIETS, R. Ozer was CEO of Portfolio Risk Technologies, an advisory firm that consulted to financial firms, and member of the board at a new financial media platform.

Second, because he came to the rabbinate later in life — neither his disposition, his family, his livelihood, nor the totality of his identity was bound up in the yeshiva. Rather, for him the yeshiva was primarily a place to learn and teach Torah, to be in touch with the Orthodoxy’s rabbinic leaders and to have a part in molding its students.

Over time, and particularly in the last few years of his life, he came to realize that as an outsider-insider who could afford to be fired, he could play a role that others could not. At the same time, he understood that this would only work if he maintained credibility both within the Orthodox rabbinic establishment as well as outside it. Thus he never staked halakhic claims contrary to declared rabbinic positions, he viewed himself as subservient to the leading halakhists of Yeshiva University, and was frequent online defender of Orthodoxy, and of RIETS in particular. Riffing on “Godwin’s law” of internet discourse, in one Facebook post (September 8, 2015) he proposed Glickman’s law: “As an online discussion of Modern Orthodoxy gets longer, the probability of the Anglo-Jewish press slandering RIETS Roshei Yeshiva approaches 1.” He was also particularly piqued when outsiders latched on to internal Yeshiva University debates to discredit the institution and the tradition it represented.

Yet Glickman often ran contrary to the unstated undercurrents that prevail in institutional Orthodoxy, writing and speaking about communal failings on business ethics, against the veneration of Rubashkin, and the problems of bestowing communal leadership awards on wealthy donors who can pay-to-play. He most recently questioned the National Council of Young Israel’s decision to honor Anthony Scaramucci at their dinner, the conspicuous consumption of lavish Passover hotel programs, and in our last conversation, lamented that Orthodoxy had become a social-political — rather than a religious-spiritual —- identity.

He detested racism and its expressions in our community.

Glickman described himself as a fiscal conservative with an independent bent who had little patience for most progressive causes. Yet he forcefully spoke out against racism and its expressions in our community. Describing his evolution from away from the liberalism of his youth, R. Ozer wrote on his private Facebook group: “One thing that will never change is my disgust for racism in all its forms. I was accused by a well-meaning but I believe misguided young man as hyping Trump’s racist comments. I was lectured by an older troll whom I’ve encountered before for not having hakarat ha-tov for the President. The philosophy here is ‘Yes, he’s a tremendously flawed hypocrite but he does good things for the Jews.’ You can understand why this evokes in me a visceral disgust. My parents were active in the civil rights movement. James Farmer, one of the founders of CORE, was a family friend. During high school, my parents recruited me to tutor in the inner city one day a week, the only afternoon I didn’t have a Talmud tutor or Gratz College after school. I met Bayard Rustin as a boy and attended NAACP events with my parents. I remain their son, even as my father has been gone for fifty years and my mother for twenty-seven.”

He similarly detested the certainty through which many assumed their religious convictions compelled a given political orientation. He had political views, he had halakhic views; but thought they are best kept separate.

Just hours before he died suddenly on Monday night, Glickman wrote, “Have the courage of your political views and express them honestly without the patina of religious self-righteousness. Your political views may be informed by your understanding of Jewish tradition, but they are not necessitated by it. So are the views of your neighbor whom you likely disdain only because he doesn’t agree with you.”

Further, in private, he would often point out what he saw as communal and leadership flaws and encouraged people on their own path. In this manner, he gained many students both at Yeshiva University, and via Facebook, throughout the world.

Glickman was no typical tzaddik; he was not built on the model of the 19th-century rabbi, the Chafetz Chaim [Israel Meir Kagan]. He was often known as “Tony,” and depending on his fluctuating weight, “Big Tony.” He did not rise to the heights of Wall Street without stepping on a few toes and throwing a few elbows. He wore an Arsenal jersey while watching soccer games, and had no qualms broadcasting that fact. He would study Torah, and on occasion, talk during prayer services. I never got the impression he was the first person at minyan each morning.

Though self-deprecating, he had a heathy ego and due sense of self-regard. He was a complex and non-linear personality, and sometimes did things that were hard to explain. He would use language or crack jokes that would never make it into an Artscroll biography.

Yet he was free and generous in his praise and compliments to others, often gratuitously so. He realized that there is nothing to lose and much to gain by treating others with respect, especially from across the political and ideological divide. He had an eye for those people who blend into the scenery that the rest of us tend to ignore —- whether Jewish or not. He was a fiscal conservative who took seriously the idea that if you believed the government was not the answer, private charity had to pick up the slack.

Rav Ozer may not have been the model of a gadol or a tzaddik that we grew up with as kids. But he had a keen sense of what type of leader our community needed, and he rose to that occasion.

Chaim Saiman teaches at Villanova University’s Charles Widger School of Law. His book, ‘The Rabbinic Idea of Law’, will be published by Princeton University Press this fall. Though never formally a student of Glickman’s, he enjoyed talking Torah, legal theory, and communal issues with him for more than a decade.