Does The Torah Require Us To Publicize Names Of Sexual Abusers? 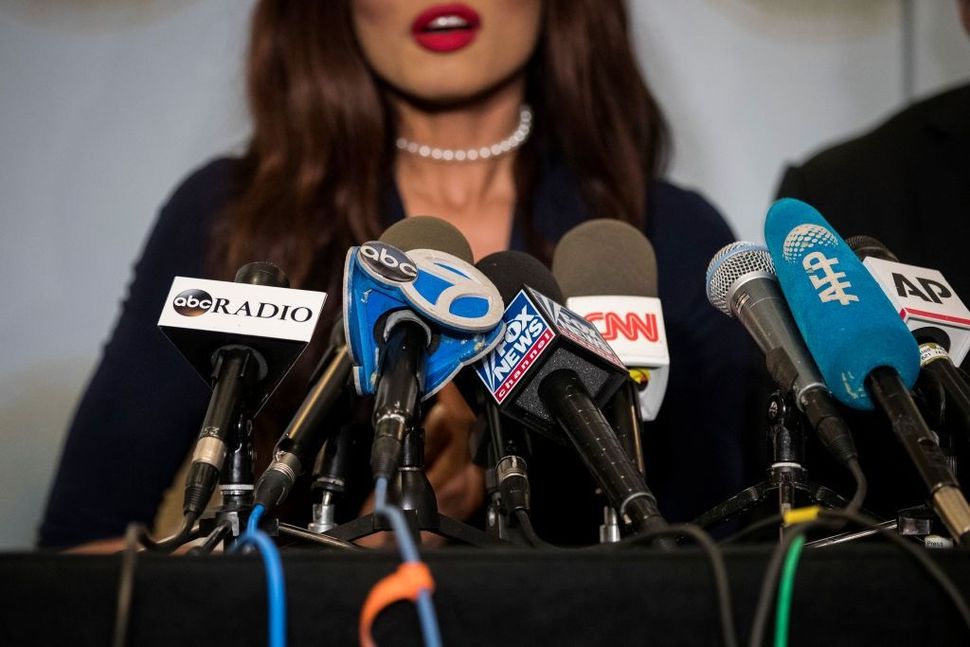 NEW YORK, NY - NOVEMBER 28: Actress Kadian Noble speaks about her experiences with Harvey Weinstein during a press conference to announce the filing of a lawsuit against Harvey Weinstein, Bob Weinstein and The Weinstein Company. Image by Getty Images

Judy was a successful Jewish communal professional who had just secured a new job as the executive of a prominent Jewish organization. She was leaving an agency where she had served as a valued senior administrator, and on her last day, she made the rounds to say goodbye to colleagues. Judy had always had a warm, respectful rapport with the chief operations officer (COO), so she was shocked when he grabbed her face and pushed his tongue into her mouth. Judy pushed him away and fled the building. When she left, she was determined never to see him or step foot in the building again.

Later, however, her conscience got the better of her. Keeping silent about the offense meant that the COO would have the opportunity to victimize others, including younger colleagues who could not escape his clutches as easily as she did. Realizing that she was in a prime position to make a difference, Judy contacted the CEO and made a formal complaint.

In keeping with the agency’s procedures, she was called in to tell her story at a hearing chaired by the board president, who was an attorney. Both she and the COO had been invited to bring advocates. Judy brought her husband, who was a rabbi. The COO brought an attorney. Judy remembers the proceedings as an extended ordeal in having her name and professional reputation besmirched in front of colleagues and lay leaders, as she fended off accusations that she was a liar, that she had been seeking sexual attention, that she was an agitator intent on alienating female staff from male supervisors. The proceedings ended when the COO’s attorney announced that if Judy didn’t drop the complaint and sign a non-disclosure agreement, he would sue her for defamation.

Judy signed and once again fled the building in humiliation, this time never to return. These events unfolded almost thirty years ago.

Though Judy is my mother, we had never spoken of this until earlier this year, when the #MeToo movement prompted her to share her story.

This is the power of #MeToo: Something unprecedented is happening as women and others break long silences and speak out. Within the Jewish community, an outpouring of stories like my mother’s testifies not just to the prevalence of gender-based harassment, but also to the forces that conspire to suppress complaints and to hide abuse from view.

By her own account, the most painful part of my mother’s ordeal was not the initial offense; it was how she was publicly disgraced when she made her complaint. She was following procedures and holding the organization to its own professed values, yet her colleagues treated her as a threat and rallied around her assailant.
Was her employer justified in allowing a non-disclosure agreement? The question is a legal one, but it is also an ethical one: What does Judaism teach us about how to respond to accusations of harassment or assault? Are we to regard the reputation of the accused as the highest priority even if that means silencing those speaking up against abuse? If so, how can the Jewish community address the problem?

Within the Jewish community, the #MeToo moment has not yet given rise to the kind of public reckoning that has occurred in other segments of American life. An avalanche of stories testify to abuse and humiliations that women and other victims have endured at the hands of rabbis, donors, and supervisors, but still, the names of the accused remain well-guarded secrets.

Since the start of #MeToo, not a single perpetrator from within the world of American Jewish institutional life has been publicly brought to account, and no one has stepped forward to offer a public apology. For us, the big disclosure of the past months has not been to publicize the names and actions of particular perpetrators, but rather to first acknowledge that the problem of sexual harassment and gender bias exists within Jewish organizations, and that it might be pervasive.

Why are things playing out differently in the Jewish community than in other sectors of American society? Part of the answer seems to lie in Jewish ethics. Judaism, we are taught, warns against certain socially destructive uses of speech like gossip, and places great value on respecting people’s reputations. We are not to speak ill of people behind their backs or publicly humiliate them in front of others. Such ethical principles are being invoked in conversations, in person and online, as reasons not to go public with accusations in the absence of irrefutable proof or a confession. Victims of harassment already have lots of reasons not to come forward, when to do so is to risk being sued and ostracized. Concerns about Jewish ethics present yet another obstacle, particularly when well-meaning leaders presume that to address victims’ complaints openly would be to transgress Jewish teachings.

In my reading of the sources, the question is far from clear. In some cases, Jewish ethics might actually support publicly disclosing the names of suspected abusers.

Generally, the procedures for seeking justice are clear. First there is an accusation, then an investigation, and then—if the accused is indeed found to be guilty—a punishment follows.

When it comes to cases of gender-based harassment and abuse, however, there are two factors that make the ethical pursuit of justice far more complicated: First, accusations are rare because they entail real risks for the victim. Generally, it is only when accusations become public that enough evidence emerges to allow a thorough investigation to proceed. As we have seen in case after case, when one brave victim speaks out, others are emboldened to come forward. Sometimes, scores of offenses remain unreported until a first accuser breaks the silence. It is often only the publicity of the accusation that allows the pursuit of justice to proceed.

But this brings us to a second complicating factor: From the perspective of the accused, it is this very publicity which makes the process of investigation feel like a penalty in itself. In today’s climate, to be the object of an accusation is to suffer public humiliation, and there are few experiences that are more punishing than that.

Herein lies the ethical conundrum: It is only through publicity that the truth will come out, but once an accusation is public, the worst punishment has already occurred. Within the Jewish community, this conundrum is wrapped up in layers of fear and a misunderstanding of Jewish tradition. To protect the names of the accused is to make a clear moral choice, privileging the dignity of the accused over a reckoning with past abuse.

Jewish speech ethics stress the grievousness of speaking ill of others and emphasize the value of a person’s good name and reputation. The prohibition on Leshon Ha-Ra, evil speech, is thus very broad, encompassing not just the spread of lies and unfounded rumors, but also the dissemination of true statements that reflect poorly on another. Shaming another person in public is considered a particularly grave offense. On the face of things, teachings about Leshon Ha-Ra would seem to militate against publicizing the names of accused perpetrators.

But Jewish speech ethics don’t only address the dangers of speech; they also acknowledge the dangers of keeping silent. Sometimes speaking out is an imperative. For example, under some conditions, it is a duty to rebuke a person who has committed a misdeed (tokhecha). Likewise, if speaking ill about a dangerous individual will prevent another from coming to harm, speaking up is an ethical obligation (azhara).

Alongside rabbinic teachings that abhor public shaming are many examples of rabbis using the threat of public embarrassment to uphold communal norms. During the classical age of the Mishna and Talmud, the Sages used the institution of Nidui, or ostracism, and Nezifa, or admonishment, to penalize those who dishonored them or their teachings. In one instance (B. Moed Katan 17a), the Babylonian leader Rav Yehuda imposes a ban of ostracism on a fellow scholar on the basis of rumors, even though there is no clear evidence against him. Eventually, the ostracized scholar dies of a wasp sting on his penis. This apparent act of divine justice both hints at the nature of the rumored misconduct and confirms that Rav Yehuda did the right thing in issuing the ban.

To be sure, Jewish tradition is cautious with respect to the reliability of gossip. When it comes to matters of jurisprudence, particularly in relation to capital crimes, Jewish law upholds a high threshold for admissible evidence and testimony, and there is no room for hearsay.

But the concerns of the Talmudic sages extended beyond the courts to embrace broader considerations about society and culture. Rav Yehuda recognized that rumors are an important measure of communal health and flourishing. The institution of the rabbinic ban effectively moved misbehavior from the shadowy realm of secrets and rumors into the light of public attention. Most of the time, the threat of public shaming was enough to deter abuses of power. But when there was reason to suspect that abuse was happening, rabbis did not hesitate to make their accusations public.

The Jewish emphasis on the power of the tongue has never been a justification for keeping silent in the presence of injustice. While concerns about public shaming are grave, they do not outweigh the ethical cost of perpetuating abuses of power. Today, too many victims remain in the shadows, silenced by fear and isolation, and perhaps by ethical concerns. So long as their stories are suppressed, there can be no communal accounting. A Jewish community that attends only to the perspective of the accused betrays core Jewish commitments to truth and justice.

I’d like to think things have changed in the decades since my mother first made her complaint. Now the man who harassed her is dead, and so she takes no risk in speaking out, but neither does she have anything to gain. For her, the measure of this moment lies in how we receive the reports of others who speak out and name names. Will we extend dignity to those who come forward, honoring their courage, listening to their testimony, investigating their claims, protecting their professional reputations, and facilitating their pursuit of justice? Jewish ethics demands no less.

Rabbi Mira Beth Wasserman, PhD., is director of the Center for Jewish Ethics at Reconstructing Judaism, where she has launched a new initiative called The Torah of #MeToo.

Does The Torah Require Us To Publicize Names Of Sexual Abusers?