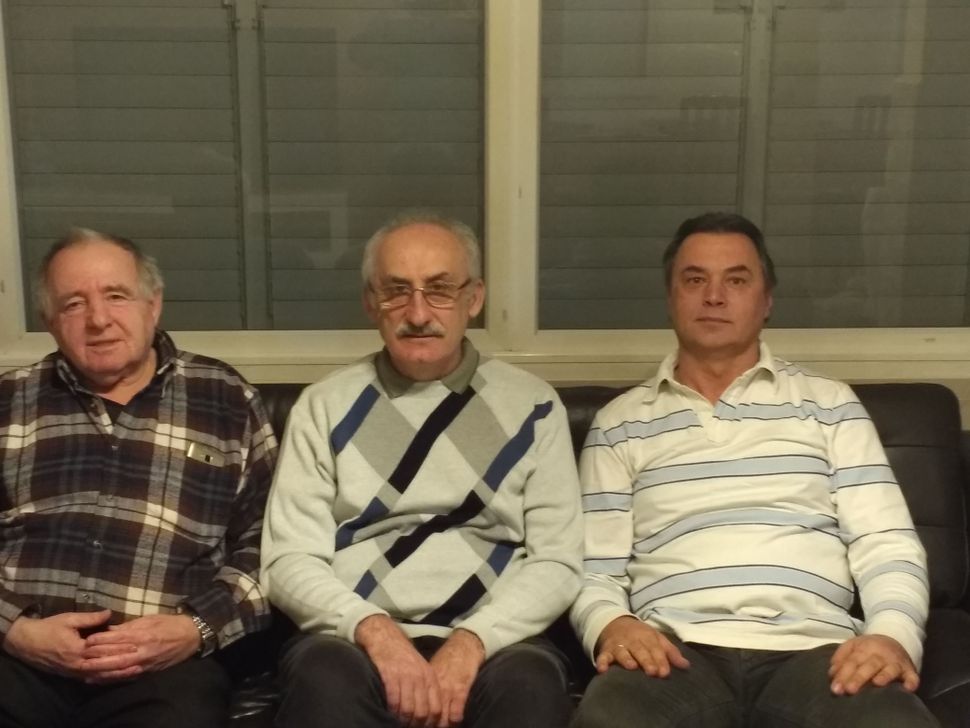 Alexander Kalantirksy speaks halting Hebrew with a heavy Russian accent. He was seated in a straight-backed chair in his small, dark apartment in Bat Yam, a suburb of Tel Aviv.

“Nu, I am not a hero,” he said matter-of-factly, and a bit impatiently. “I am an engineer. I knew what it meant. It had to be done.”

Kalantirksy, 77, from Moscow, is chairman of the union of Chernobyl liquidators in Israel. He is one of an estimated 800,000 “liquidators,” men and women who were sent to the site of the Chernobyl nuclear power plant after the reactor’s explosion on April 26, 1986. Kalantirsky, a construction engineer who worked for a security firm at the time, was head of a team that helped build the sarcophagus, the giant concrete dome that would contain the leaking reactor so that the radiation would not spread.

The Soviets’ uniforms were not adequately protective, so most of those who were sent into the highly radioactive areas were exposed to huge doses of radiation. Some, like Kalantirsky, worked in the direct vicinity of the reactor for months.

The Soviet government tried to keep the news of the disaster from the public — even allowing the popular annual May Day parade to take place less than a week later in the streets of the towns of Chernobyl and Pripyat, only a few miles from the destroyed, and highly radioactive, plant. Only after high doses of radiation were measured in places as far away as Switzerland and Scandinavia did the Soviet government admit to the accident. Evacuations of the contaminated areas began later.

“Eventually, the whole world knew about the disaster. But most people never really ask themselves who took care of it.” Kalantirsky said. “We did, the liquidators. If we wouldn’t have cleaned up the reactor, the radiation would have spread — to Europe, to the Middle East. Here in Israel, too, thousands might have been affected by radiation.”

Several dozen workers died soon after the accident. Many became ill in the months following, and, in the 32 years since the disaster, an unknown number have died or now suffer from illness related to the radiation exposure. Hundreds of birth defects have been reported in the area.

In their home country, the liquidators were considered heroes. Those who survived received extensive social welfare benefits, subsidized housing and preferred medical treatment.

With the fall of the Soviet Union, some 4,000 liquidators, along with an estimated 350,000 Jews who had lived in the areas affected by the fallout, chose to come to Israel, part of the huge wave of immigration to Israel from the former Soviet Union in the early 1990s.

But once they left the FSU, and in clear violation of international law, their home countries cut off the liquidators’ benefits. Today, only about 1,200 liquidators are still alive in Israel.

In 2002, Kalantirsky organized a liquidators union, and lobbied the Israeli government to pass a law to provide members with a supplement of less than $1,500 a year — less than the monthly allocation they received in the FSU.

“We are sick. We have needs,” Kalantirsky said. “But the government pays us no attention. Many of us cannot work. Some of us are very poor. No one cares.”

For years, the iquidators union tried unsuccessfully to convince the Israeli government to negotiate with their countries of origin to reinstate their benefits and pay them here, as required by the Vienna Convention on Civil Liability for Nuclear Damage, which, passed in 1997, detailed the rights of the liquidators. But union members were unable to bring any government institutions to negotiate on their behalf or to provide them with the benefits that they demand.

Frustrated and angry, the union of Chernobyl liquidators in Israel, together with Knesset member Ksenia Svetlova (Zionist Camp) and represented by the offices of Gilead Sher & Co., petitioned the high court of justice to instruct the government to implement regulations that will ensure medical follow-ups, provide housing benefits and make the liquidators’ rights comparable to the rights of those who work in the nuclear reactor in Dimona, who are able to purchase life insurance and receive compensation if they contract diseases. The court is expected to hear the petition in May, but as of yet, there has been no official government response.

“Whom does the government think it’s fighting against?” Svetlova said in an interview with the Forward. “People who saved the lives of millions of people who are getting older and sicker?”

Gregory Bargel, 55, from Minsk, Belarus, and Anatoly Kundish, 66, from Ukraine, joined Kalantirsky in his small living room for the interview. Kalantirsky put out fruit and cookies, but his guests did not eat much. “I still get a metallic taste in my mouth,” Bargel explained.

Bargel reflected on his experiences in Ukraine: “In 1986, I was married with a baby daughter, and my wife was pregnant. When they called me to the reactor, I was a soldier in the army. And now, my life is worth less than nothing.”

Each man is suffering from medical problems that, he believes, are related to his exposure to the radiation. Bargel said his bones are weakening and that all his joints, especially his knees, are so painful that even walking has become difficult. “I spend most of my stipend on painkillers,” he said. Kundish suffers from severe cardio-vascular illness and is extremely sensitive to the sun.

Kalantirsky rolled up his sleeves to reveal deeply deformed elbows and forearms. “All my bones, and my heart, too, hurt,” he said. “Of course, if I get an illness, I will have medical treatment, like any other Israeli citizen. But my doctors say that first I have to get sick. There is nothing special about Chernobyl, they tell me. Chernobyl isn’t a diagnosis.”

Dr. Semion Shapira, a former head of the now-closed SPECTR, a center of preventive medicine at the Carmel Medical Center in Haifa, agrees that a mere “Chernobyl” isn’t a diagnosis. “But that does not mean,” he said, “that the people who were exposed to that radiation do not need regular medical follow-up to allow for early detection of malignancies and other diseases. And they need specialized tests.

“It’s not just the liquidators who should be receiving specialized care,” Shapira told the Forward. “It can take 30–40 years for the results of the radiation to show themselves. Even children born here to parents who lived in the area may show symptoms. We do not know.”

And forgetting about the Chernobyl survivors can have larger consequences for future disasters. “Israel has one of the largest populations of Chernobyl survivors,” Shapira said. “We could be learning so much, for ourselves and for the entire world.”

Svetlova showed the Forward a letter, dated July 5, 2017, to the Knesset Committee for Immigration, and Integration in which the minister of health, Rabbi Yaakov Litzman, states that the rates of morbidity and mortality among the liquidators are lower than those in the general public.

“So [Litzman] said,” Shapiro said dismissively. “He can say anything. He is wrong.”

The ministry did not respond to the Forward’s queries.

“This is the typical runaround,” Svetlova explained. “If, as the Ministry of Health claims, they are not any sicker — or even healthier! — than any other group, then why are they being refused life insurance? And why are the workers at the Dimona reactor able to purchase life insurance? This is one of the issues we will bring up to the high court of justice.”

They will also be demanding housing benefits from the Ministry of Immigration and Integration. “I live in a fourth-floor walk-up,” Bargel said, “because it is the only apartment I can afford. But it takes me very, very long to climb the stairs, and it is very, very painful.”

“I cannot understand why the State of Israel treats us like this,” Kundish said. “We go from ministry to ministry, and they just push us away. Maybe that’s on purpose — the longer the State makes us wait, the fewer of us there will be.”

Eetta Prince-Gibson is the former editor-in-chief of the Jerusalem Report.