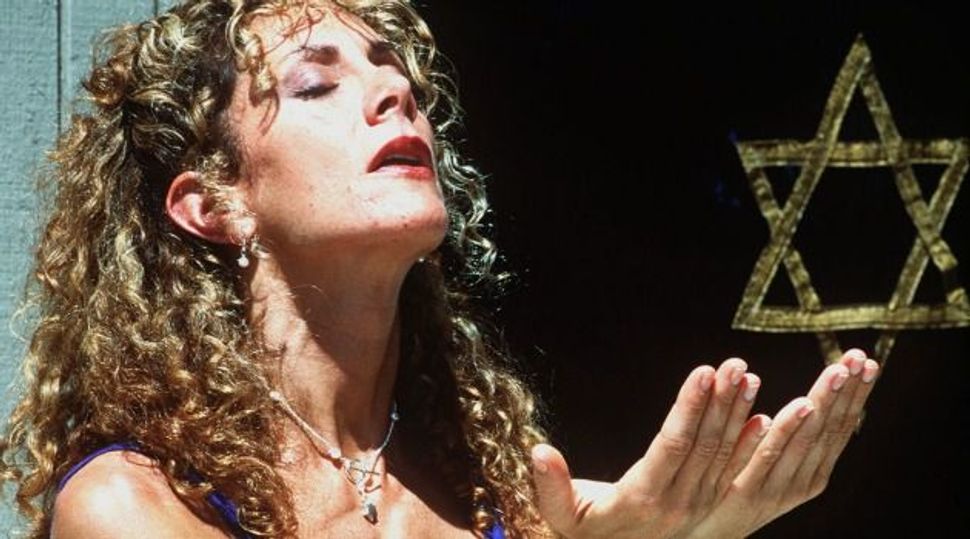 The Changing Face of the American Cantorate: Judy Greenfeld, seen here in 1998, reflects some of the radical changes that have characterized the last thirty years in the soundscape of American Judaism. Image by Getty Images

Rebecca Garfein was fifteen years old when the man seated in front of her turned around, at the sound of her pleasant singing voice, and offered her an opportunity that would lead her on the path to become a cantor. At the time, Garfein didn’t even know what a cantor was.

Throughout her childhood, Garfein had always been encouraged to sing, especially at Temple Israel in Tallahassee, Florida, where her father was the local rabbi. The congregation employed a female (non-Jewish) soloist, but she was no cantor.

“How’d you like to go to New York and become a song leader and learn to play the guitar at camp?” Garfein recalls the man asking her at the South Eastern Federation of Temple Youth (SEFTY) convention in Dothan, Alabama. That man just happened to be the Director of SEFTY.

The idea of spending a summer in New York delighted the teen, and with her parent’s blessing, she headed to the Union of Reform Judaism’s Kutz Camp in Warwick, New York.

“Kutz camp is where I encountered my first female cantor,” reminisces Garfein. “She had a gorgeous mezzo-soprano voice and I remember thinking ‘How cool that this is a thing. I could become a cantor! A whole world opened up to me that summer.”

In 1985, after completing high school, Garfein headed to Rice University’s Shepherd School of Music, where she graduated with a Bachelor’s in Music.

Soon after she began to research cantorial schools.

She contacted Hebrew Union College-Jewish Institute of Religion initially and also looked into The Jewish Theological Society (JTS). She soon learned that while JTS accepted female students they were not permitted to join The Cantors Assembly, the Conservative movement’s professional union that helped place students in cantorial positions once their education was complete. She decided not to apply. Instead she applied to Hebrew Union College-Jewish Institute of Religion’s Debbie Friedman School of Music (HUC-JIR) in New York City where women were not only accepted but were the majority. “When I auditioned, it was like the stars aligned. I knew I was meant to be there from that day on. That year proved to be the largest class size in the history of the school. There were a total of 17 of us, and 14 were women,” Garfein says.

Garfein was the youngest student in the class of 1993, having enrolled right after college. “The students in my class were by and large second career students upon entering cantorial school. They were looking for a job with more flexibility than being in corporate or working as a performer. Back then, the job of the cantor wasn’t the full-time role it is now. It used to be, come in, sing, and leave. Not anymore. Now Cantors are fully engaged with lifecycle events, teaching and giving sermons,” shares Garfein.

In 1993, when Garfein and her fellow classmates graduated from HUC-JIR they were placed in jobs through the American Conference of Cantor’s, the Reform movement’s professional union.

Garfein was somewhat of the unicorn of the bunch, receiving three job offers. “I had experience as a song leader, playing guitar, teaching music and I was a classically trained opera singer,” she says explaining her high demand.

Her first job was a student cantor at Riverdale Temple in the Bronx. “It was a pretty big deal because they had never a cantor before me. It was a soloist-choir-organ type place until I came along,” says Garfein. She remained there for six years.

In 2000, Garfein left Riverdale Temple and made history, becoming the first woman ever to serve as Senior Cantor at Rodeph Sholom, one of the largest synagogues in New York, founded in 1842.

Eighteen years later Garfein is still making history, as today she is the only female senior cantor in New York City.

This is quite a new development – as this profession not so long ago was exclusively male, but today, HUC’s Debbie Friedman School of Music reports that its class of 2019 is made up of entirely women.

“There’s a long way to go to be completely accepted in a more traditional framework and it can be painful that there are still times when we are part of mixed community events and we as women are not allowed to sing alongside men simply because of our sex,” says Garfein.

Although many more women are joining the cantorate, men still remain in most senior positions, both as rabbis and cantors, confirming that the gender wage gap hasn’t skipped over the religious sector.

But many female cantors say that women are finally catching up.

“Women cantors have not been in the field nearly as long as men have so we’ve got some catching up to do, but the times are changing and society has made it clear that it is not acceptable for a man to be paid more than a woman for the same job,” says Cantor Deborah Katchko Gray, founder of The Women’s Cantor Network. “Sometimes it’s not necessarily a gender bias but the financial struggles of an institution that accounts for salaries. Personally, I’m in my eighteenth year as a cantor and I’m extremely well-compensated and on par with the men in my career. I remember a time when a male cantor in a full-time role was making less than I was in a part-time Cantor role. Sometimes it’s simply about the organization’s resources. I know a woman cantor making $200,000 in a major pulpit today. As women cantors, our stature and confidence have risen and the more we share salary information the better off we will be”.

“Personally, I’m a glass half-full type,” says Garfein. I have a great job and most importantly, I love what I do. Being excellent at what we do is what will create change.”

Some of that good work will be recognized at Rodeph Sholom on May 2 with The Cantors In Concert: Voices of a Generation honoring the Debbie Friedman School of Music Class of 1993, Garfein’s graduating class.

“Overall, we as women have made a lot of progress, and more and more people are embracing us into the fold. I remember the first time my young sons met my male cantorial intern and turned to me and said ‘Wait, boys can be cantors too?”