Studying Talmud As A Woman Is Often Lonely. But It Doesn’t Need To Be. 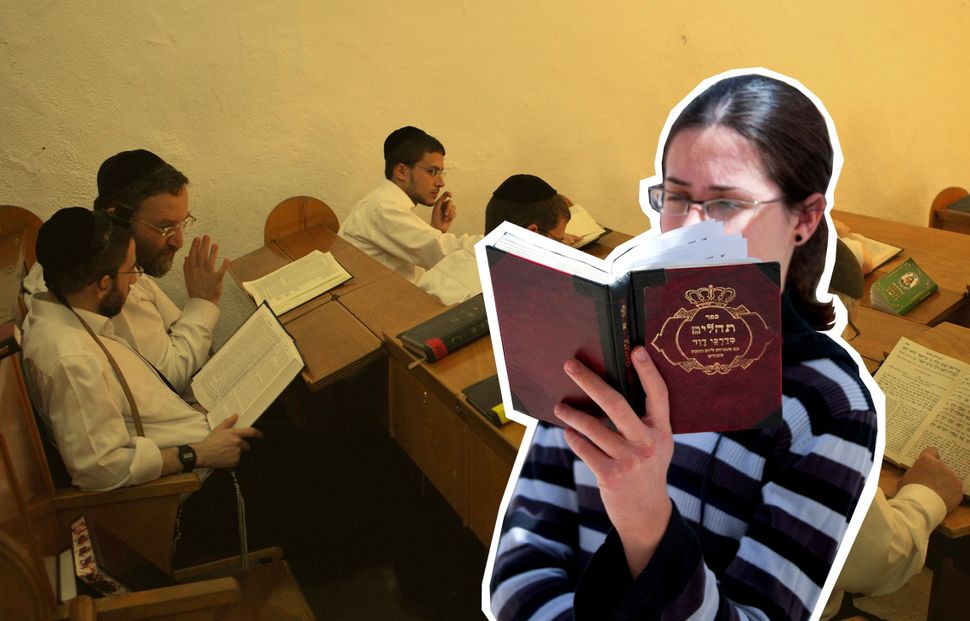 When I first started studying Talmud regularly, I attended an otherwise all-male class taught by a rabbi in a local synagogue in Jerusalem.

I sat in the back corner of the room, but the walls of the classroom were transparent and I was conscious that everyone walking in or out of the main building of the synagogue could see me sitting there, as if I were one of the guys. Though the other men in the class often engaged the rabbi in conversation, asking questions about the Talmudic page he was teaching or raising objections, I never opened my mouth.

The only women’s voices heard in that class emerged from the Talmudic page itself, and they were hardly sympathetic: A woman who screams hysterically that a prominent religious leader has stolen her sukkah; a Roman matron who tries to seduce a righteous but tempted rabbi; a rabbi’s wife who kicks one of her husband’s students to rebuke him for whispering in the study hall instead of reading the text aloud.

But these voices were few and far between, because the Talmudic conversation was primarily dominated by male rabbis debating the finer points of Jewish law: Can a Jew store wine in a vessel previously used by non-Jews? How far is it permissible to walk on Shabbat? Who could bring the Paschal sacrifice to the Temple, and who could not?

Though I remained silent in class, I found my own way to add my voice to these conversations. Hunched over my volume of Talmud in the back corner of the classroom, I scribbled fast and furiously in the margins.

When I didn’t understand something the rabbi said, I merely copied it down verbatim so that I would be able to think about it later, on my own time. When something amused or surprised me in the text — a rabbi who was nicknamed “Toothy,” or rabbi’s sons and daughters who race each other to the Temple altar (the girls win!) — I jotted down exclamation points in the margins and underlined phrases I wanted to remember.

Image by Sefaria Pesachim 89a

Later, at home in the evenings, I would review my marginal notes and write limericks and sonnets about those Talmudic passages I’d particularly enjoyed, in the hope of committing them to memory. I did not share my poems with the men in the class, but they saw me scribbling, and they used to tease me that I should not take notes in pencil. “Look what came of Rashi’s marginal notes,” they said to me. “Maybe someday someone will want to publish yours. You should write in pen so it doesn’t fade!”

In the end I published my notes, or some version of those notes, in my memoir If All the Seas Were Ink. My memoir recounts my life journey over the seven-and-a-half year period of daf yomi, an international program to study one page of Talmud a day.

Since the book was published in September, I have lectured widely about my experience of Talmud study and I have been flooded by emails from daf yomi learners worldwide. Many of them are women, and I am beginning to appreciate just how many women have begun studying Talmud, adding their voices to the Talmudic conversation and finding their own creative ways to engage with the text. Now, on my second cycle of daf yomi, I no longer feel like I’m part of an all-boys’ club, and my own study has been enriched by the insights and contributions of all those women, worldwide, who are on the same page.

On my previous cycle of daf yomi, if I could not attend the daf yomi class, I would listen to a podcast taught by a rabbi from Yeshiva University who spoke in heavily Yiddish-accented English. He referred to people as “men” and frequently relied on euphemisms to gloss over the Talmud’s more colorful passages: “If a man goes off and has marital relations with a prostitute…”

I knew that ‘marital relations’ was his term for sex, but in this context I could only laugh. At the time, I did not know of any women who taught daf yomi, though I subsequently learned there was a morning class at Matan, a local women’s yeshiva; I wish I’d known of it then.

As I studied each page, I followed along in the commentary by Rabbi Adin Steinsaltz, which I enjoyed because it brought the historical world of the Talmudic sages to life – Rav Steinsaltz’s marginal notes included biographical information about the various rabbis and glosses on the material culture of the rabbinic world. All of these teachers illuminated the Talmudic text for me, and I’m not even sure that I was conscious of the fact that all my teachers were men.

Now, halfway into my second cycle of daf yomi, I am learning from an array of women scholars.

Every morning I listen to a podcast by Michelle Farber (Dafyomi4women.org), who teaches a daf yomi class to women in Raanana, Israel. Farber’s knowledge of Talmud is vast and encyclopedic, and she approaches the text with a deep literary sensitivity. When she illustrates scenarios from the Talmud, she invokes the names of the women in the class: “If Shoshana’s ox falls into Dana’s pit…” In the margins of the Talmud, Rashi illustrates Talmudic scenarios similarly, except that he invokes the names of Jacob’s sons: “If Reuven’s ox falls into Shiimon’s pit…”

It is refreshing to imagine women as actors in the Talmudic drama, as well as to hear the women in the class occasionally chiming in with questions and comments. To supplement by daf yomi learning, I have often referenced the Feminist Commentary on the Babylonian Talmud, which is planned as the first systematic and comprehensive feminist analysis of the entire Babylonian Talmud.

The series — still a work in progress — is the brainchild of Israeli-born historian and Talmudist Tal Ilan, and the various volumes are authored by distinguished professors of Talmud worldwide, all of them women. When in search of lighter reading, I’ve enjoyed various historical novels featuring Talmudic heroines by Maggie Anton (in English) and Ruhama Weiss (in Hebrew), as well as the creative fictional reimagining of rabbinic stories by Ruth Calderon. And when I have just a few moments, I glance at the remarkable website of Jacqueline Nicholls, who creates a drawing to illustrate some aspect of each page of Talmud she studies.

I feel fortunate that my Talmud study has been deepened by so many of these voices, and that I am part of a global community of learners that includes men and women alike.

Ilana Kurshan is the author of If All the Seas Were Ink, published by St. Martin’s Press. Check out her website www.ilanakurshan.com for more information.

Studying Talmud As A Woman Is Often Lonely. But It Doesn’t Need To Be.