I Was Raised To Love Israel Above All — But It Didn’t Stick. 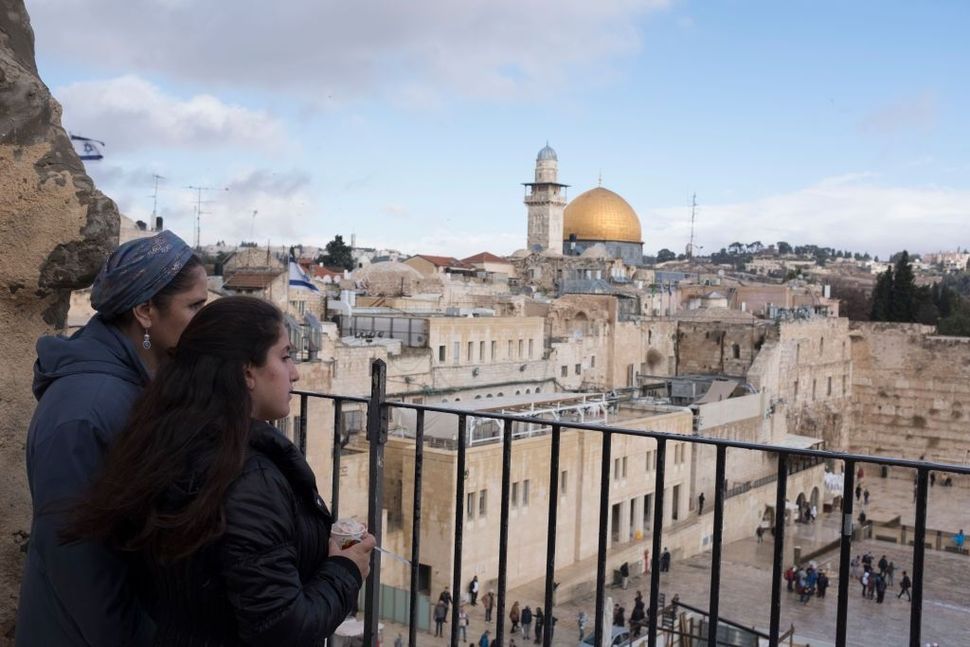 The summer before my bat mitzvah, I traveled to Israel on an all-expenses-paid trip sponsored by ARZA and El Al Airlines. Everywhere I went, I was scheduled at events where I read the essay that had earned me this prize, “My Dream Week In Israel.” I read it for then mayor of Jerusalem Teddy Kollek (“She is the future of the Jewish people,” he said in English to the small assembled crowd of reporters on a roof deck at the King David Hotel). I read it at the synagogue where Otto Frank had donated a Torah in honor of Anne Frank. And everywhere I went in the Promised Land, reading my essay about what I’d hoped to find there, I considered myself a bit of a fraud. Because everywhere I went in this land that was supposed to by my home, I felt like a stranger.

Jews in the American Diaspora have long sought ways to raise their children with a love for a place they, in most cases, have never seen. From yearly fundraising walks where families in cities across America would gather to show their solidarity with the Jewish state, to raising money to plant trees in new-growth forests, to the Israel bonds our grandparents gave us for every Hanukah and birthday — American Jews, many of whom could not travel there themselves, were determined to be stewards of the Jewish homeland. For many American Jewish kids, then, bar and bat mitzvah carries with it not the obligation of the commandments themselves, but the obligation to take on a meaningful, personal relationship with the official Jewish homeland. Bar and bat mitzvah-age trips to Israel are an entire cottage industry, with some American kids even having their ceremony at the Western Wall itself, then returning home for their celebratory dance party.

Love for Israel seemed to come naturally for my parents’ generation, who grew up as the country did, or for my grandparents, who had watched the atrocities of the Holocaust unfold, and looked with love and fierce loyalty on the country that was established partly as a worldwide acknowledgment of the critical need for a Jewish homeland. Engagement with the political questions of the modern State of Israel is important and necessary for any Jew or global citizen, but these questions are separate from, if overlapping with, those about how I and other young American Jews at the end of the 20th century and beyond tried (and continue to try) to make sense of our personal relationship with our ancient homeland.

There is no other country where you can look up at the stars and see them in the same spot where our father Abraham did, where you can stand where Jacob wrestled with an angel. In fact, Israel sometimes feels like a land made entirely of stories—they whisper to you from the dust—but the tension between the historical and the apocryphal always kept me at arms length from the land. Did Abraham stand here, if he even existed? Was I, Rachel, named after a real woman who wept for her children, or simply the idea of a woman, mother, bride?

Some of the stories, of course, live not only in myth but in historical record as well. When I returned to Israel at twenty-one, I sat among the rubble of the destroyed temple on Tisha B’Av and listened to Lamentations and knew that real people—my people—had suffered, died, done the unspeakable, the unimaginable, to survive in this place. It was the closest I’d ever felt to the land, knowing that I sat in a place where my people did, seeing the very stones they watched fall. But how far back in time, my skeptic’s brain always asked, before the events became metaphors, before the real people dissolved into legend and slipped like desert sand between my fingers? Being part of a people with a history that reaches further back than certain recorded histories had always made me feel like a kind of myth in and of myself.

And so I invented the myth of myself that summer as a true lover of Israel. I planted a tree in a JNF forest, cried at the Western Wall. There are photos of everything, of course (which, among other things, document the intense popularity of fanny packs in the summer of 1990), another way to prove that I was acting on my love for Israel. Everywhere I read my essay, I reaffirmed the fantasy of an American Jewish child returning to the land of her mothers and fathers. The only part I remember about the essay now was a description of my imagined trip to Eilat, watching fish in every color of the rainbow swim past me at the underwater observatory. It was the only city we didn’t visit.

I tried to feel everything deeply that summer, as young people often do, but what I ended up feeling was a facsimile of feelings, a belief that I should feel such feelings. I nearly convinced myself that I felt something, too, drowning out my encroaching apathy with activity after activity to show my love for the land. When my indifference attempted to surface in the quiet rest of the afternoon in our hotel or in the evening after I’d bathed the day’s dust away, I would write poems after poem about the land I wanted to love, but couldn’t, not in the way I felt I was expected to by my parents and their grandparents. To me it was a foreign land of oppressive heat and ever-looming violence. The desert landscape might as well have been the surface of an alien planet. I felt a kind of awe at the place and its history, sure, but it felt much the same as visiting the Roman Forum years later as an adult. When I searched my heart for a unique love for my people’s homeland, I came up short. Maybe I expected too much of myself. And so, as compensation, I filled my journal with odes and homages to the land, as I had planned to do when I’d brought it with me. Writing the feelings I wanted to have was an aspirational act, a performance of what I expected of myself, and believed others expected of me.

So much of what we do as adolescents is identity performance: our gender, our sexuality, our friends, our interests. I know that now, and know that it’s part of growing up. Performing one’s identity helps us play out different versions of ourselves in the world, and allows us to figure out what feels true, and what feels like a mask. But I wasn’t nearly so forgiving of this sort of experimentation of the self back then, and as I approached Jewish adulthood, anything I did that had a whiff of the inauthentic made me feel like a fraud.

The morning of my bat mitzvah I stood at the bimah, covered head to toe in pink lace, a tallit woven through with a similarly-colored pink thread draped over my shoulders, reading a poem I had written about planting a tree in Israel. A huge blown-up photo of me in my tie-dye shirt and stone-washed fanny pack kneeling next to my sapling stood propped on an easel beside me, layers of documentation that seemed, to me, to protest too much.

When I returned to Israel after college, I did so to attend seminary as a newly committed Orthodox Jew. I thought that my more concrete belief in God and the Torah would conjure in me a more solid connection to the place.

But aside from that mournful evening sitting amongst the temple rubble, those same old ambivalent feelings returned. At the Wall once again, I could not even conjure crocodile tears. In Hebron, despite my faith, I found myself skeptical of the historical accuracy of the ancestral tombs there, even my namesake’s in Bethlehem, and was distracted by the weight of the contemporary political strife of the place. Our Shabbat spent in an American ex-pat neighborhood, where the residents told stories of being spiritually compelled to move to Israel, felt like I was listening to a sales pitch for a product I already knew I didn’t want to buy.

Still, after a summer there, the place, like most places where you stay for long enough, began to feel like a kind of home. I developed my own rituals there, beyond those demanded of me by faith, that made me feel like I belonged. My favorite was visiting the soft serve ice cream shop in Ben Yehuda Square. You would pick your toppings—fresh fruit, dark chocolate, halvah—and watch the workers press them into a tube that smashed and swirled them throughout the ice cream on the way out of the machine. I spent almost every free night trying to convince the other seminary girls to join me there. It’s funny that even during a time when my faith in the God of Israel was at its peak, what I finally connected to about the place was an ice cream shop nestled at its holy heart. But however insignificant it might have seemed to others, it was something unique about Israel that I didn’t have to work to love, and that meant something to me.

I still talk about that place to my children, even now, twenty years later, when they can barely remember the last time we attended synagogue.

“Isn’t that just like an American frozen yogurt shop?” they ask, scrunching their noses skeptically.

I shake my head. “No, no…it was Israeli,” I reply, finally understanding a sliver of what it must have meant for my parents and their parents to want to share their belief that there was nowhere more special in the world. And though I don’t frame Israel to them as a place of pilgrimage, a land they are required to visit or even love, I recount to them my time there with the affection one often has regarding fond memories of a place one once called home.

Rachel Klein is a writer and teacher living with her husband and two children in Boston, MA. Her personal essays and editorials have appeared in Catapult, Hazlitt, The Rumpus, Teen Vogue, Bitch Media and more, and her humor writing has appeared in The New Yorker, McSweeney’s, and Reductress. Her current project is a memoir about the seven years she lived as an Orthodox Jew. You can follow her on Twitter @racheleklein.

I Was Raised To Love Israel Above All — But It Didn’t Stick.