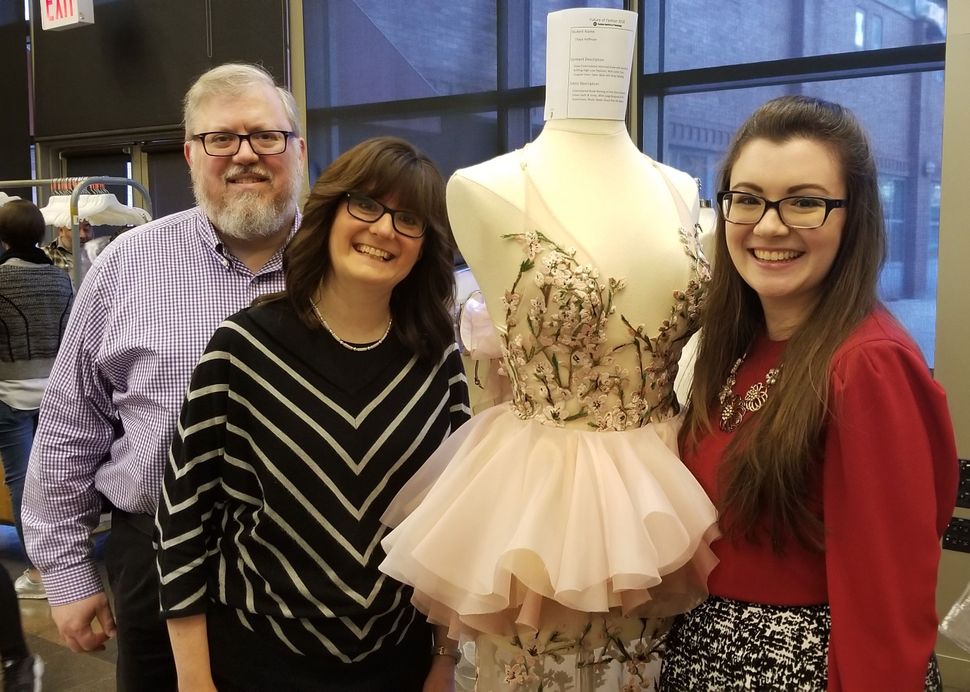 Chaya Hoffman and her parents pose next to a dress from Hoffman’s award-winning collection. Image by Rachel Ellner

When Chaya Hoffman came to study at Fashion Institute of Technology in New York City, she says her style was, “so out there with leopard and hot pink, feathers and bows, everyone called me the next Betsey Johnson.” By that point, her fashion experience included embellishing and accessorizing school clothes that had to conform to a dress code. Even while keeping to the strictures of modest dress, the girl from Bergenfield, New Jersey went all out.

Hoffman, who is Modern Orthodox, will soon graduate as an award-winner from one of the country’s premier fashion schools. Her senior thesis garment, a sheer embroidered, sleeveless, open-back gown, was chosen by industry critics at FIT’s Future of Fashion runway show. The event, which showcases the top talent of the graduating class, is covered by the fashion press and attended by industry elites like Zac Posen, Yigal Azrouël and Dennis Basso.

Hoffman’s design went on to be the sole winner of the People’s Choice Award. The award is given to a student chosen by design peers, the style-setters for future trends. Effusive praise came from her professors from the couture industry.

“Chaya’s gown was beautiful, with all the colors in the embroidery and the multi-color organza peplums. The proportion of the slinky sheer skirt, tiny bodice and over-exaggerated peplum was so eye catching” says Paula Varsalona, Hoffman’s professor and internationally known couturier designer of bridal apparel.

The gown is on display in The Museum at FIT through May 24.

Hoffman learned to design using a vast array of fabrics and materials, applying more intricacy in needlework and use of accessories. While her concentration is special occasion, she says it “helped her imagination” and refine her aesthetic to also study lingerie, activewear, knitwear and sportswear.

“When I started, I went way over the top,” says Hoffman. “I love embellishing with fur, feathers, crystals, beads. I think ‘Go big or go home.’ But I’ve had amazing professors who helped me find that line between doing too much and getting it right.”

The idea of “go big or go home,” seemed to serve the young fashion student well, at least in the beginning.

“We tend to have the students over-design with more than one important element in a gown,” says Varsalona. “Chaya tended to employ multiple elements in her designs, but it was easy to compromise with her to achieve a beautifully designed garment.”

It’s important to note that while Hoffman has gotten to explore fashion as “a big canvas,” she doesn’t view modest dress as a set of restrictions to conform to. What seems like a contradiction — designing high couture fashion, but dressing in three-quarter length sleeves with hems below the knee — is merely a design consideration for Hoffman. 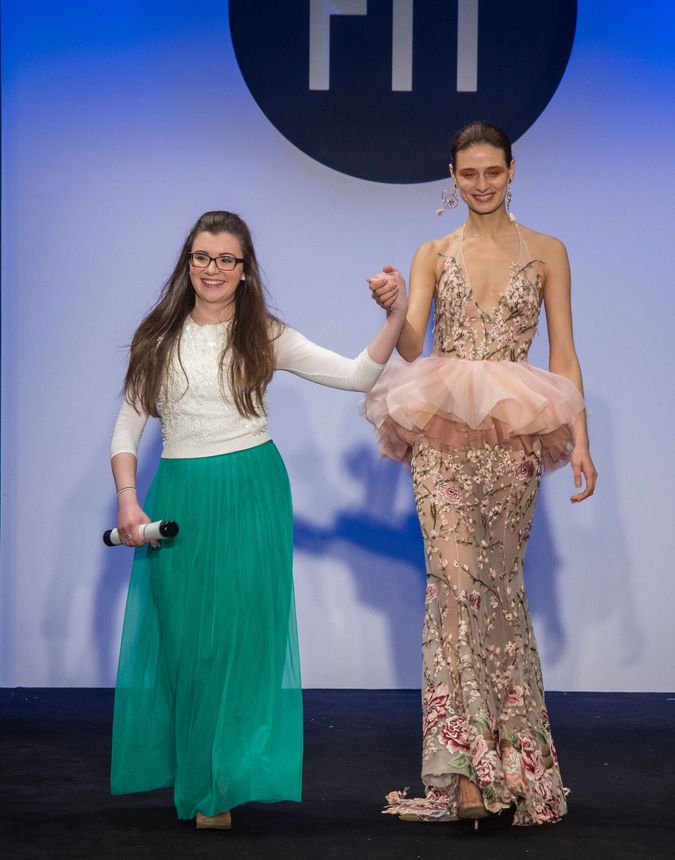 Nor does the industry see a contradiction: “Designers should never design for themselves,” says Varsalona. “A commercial designer has to address many tastes. Some may be conservative due to cultural restrictions, or fashion forward with concepts such as a sheer lace gown. A designer must design for all types and sizes.”

FIT’s Fashion Design Chair, Eileen Karp sees opportunity in designing modest fashion. “It’s an important part of the industry for Orthodox Jews and Muslims and many other groups,” says Karp. “It’s smart for young designers to be approaching these markets in new and fresh ways.”

Hoffman doesn’t shy from discussing her own modest dress. Quite the contrary: “It’s usually the first question I’m asked,” said Hoffman. “If it’s hot out and I’m wearing three-quarter sleeves, they’re always like ‘Why are you doing this to yourself?’ [But] they’re not asking in a derogatory or negative way. They’re asking out of general curiosity. I love to answer questions.”

Karp says that this type of openness, “is like putting meaning behind the clothing, and how we define ourselves through our clothing style.”

“A lot of people aren’t exposed to Orthodox[y] so I stand out. You want to make a good impression so they really understand what Orthodox is,” says Hoffman.

In return, “It’s been really cool to meet people of all kinds of backgrounds and religions. People who are really rich or are really poor or grew up in crazy situations. I’m not exposed to so much of that.”

Fashion and painting were always over-sized passions for Hoffman. “I used to draw on everything: on the walls, on my bed, my on sister’s dresser,” she says. “I loved dressing up. I had fun in high school wearing funky, sparkly tights.” 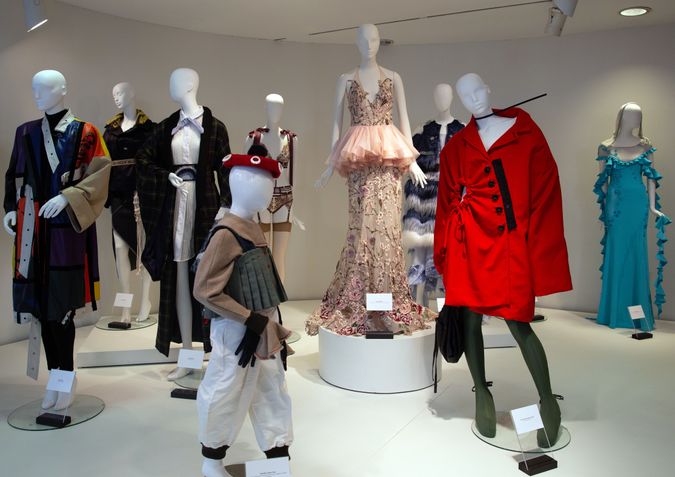 Most of Hoffman’s friends went to Stern College, the women’s division of Yeshiva University. “It was different for me to choose to come to FIT,” says Hoffman. “It was really not common. [My] teachers were against it. But thank God my family and friends encouraged me. I spoke to Rabbi Neuberger from my synagogue, Congregation Beth Abraham. He’s well-known and teaches at Yeshiva University. He told me that I would flourish because God gave me a gift and I should use it.”

Hoffman wants to one day work as a head designer in a couture company and eventually have her own company. “Right now I want a job in a positive environment,” she says.

“Her taste level in color, proportion and mixtures of fabrics and textures sets her apart from her contemporaries,” says Varsalona. “And her work ethic is exemplary.”

Hoffman’s winning design exemplifies for Karp how a student learns to hone such a large appetite for decorative detail.

“The gown is exquisite in the placement of floral, embroidery, lace and beaded motifs,” says Karp. “The mermaid shape skirt with a trailing train, fully encrusted with embroidery and beads. There’s unbelievable skill that was required to make this,” says Karp.

As for the designers who inspire Hoffman?

“I have different aspects to my aesthetic. Dolce & Gabbana for [the] rogue, romantic, the funkier side of my style. I’ve been interning at Hayley Paige, a bridal design house. Her style is similar to mine, so that’s the more elegant and graceful side. Then I like fur, so I like Fendi.”

And while she admires Betsey Johnson, it doesn’t extend beyond aesthetics. Unlike the famed designer, Hoffman won’t be doing cartwheels on the runway.

Rachel Ellner is a lifestyle reporter working out of Boston and New York City.