Why Day Schools Are To Blame For Jewish Gender Stereotypes 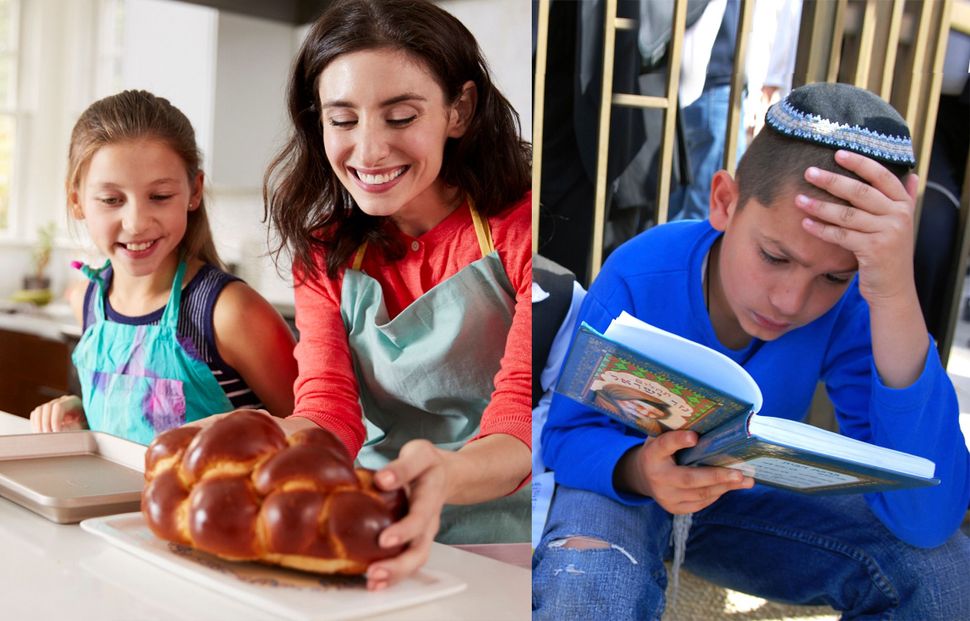 Recently, AmericanJewish day schools celebrated Yom Ha’Atzmaut, Israel’s Independence Day, with the usual activities: falafel and pita for lunch, make-your-own-Israeli-flag, come into school dressed in blue and white, and so on.

And yet in many day schools around the world, while the girls assembled for Israeli folk dancing, the boys were steered towards Israeli-style ‘army training.’ While the girls were busy with challah baking, the boys were playing soccer. While you may argue that mixed dancing or sports could have been a problem for Orthodox schools, I see no reason why the children couldn’t have done the same activities in their separate groups.

We all know that Orthodox Judaism is a religion with delineation. There are ‘male roles’ and ‘female roles’: Men are counted for the minyan, while women sit behind the mechitzah.

Whether you agree or not with the Orthodox interpretation of the Torah and halakha — the gender discrimination in Jewish day schools goes much deeper than any religious laws. It’s not just about ritual; it’s cultural, and it is veering towards becoming all-pervasive, creating gender stereotypes that I believe are harmful to our children.

By purposely keeping boys from taking part in Israeli dancing, we’re sending a message that men shouldn’t enjoy the experience of dance (yet walk into a Jewish wedding, and you’ll find hundreds of sweaty yeshiva boys who can’t stand still the second the traditional simcha music begins). We’re sending a message that despite the 2,500 women in combat roles in the IDF, we’re not interested in including them in the celebration of the State they fight for each day.

By perpetuating these gender stereotypes, we’re giving credence to the idea that men can’t show their creative or artistic sides, and that women can’t push themselves to their full potential through sports.

Of course, it’s not just a problem in the Jewish world. But somehow, even those who believe in equal rights struggle to keep true to this when it comes to informal Jewish education.

Outside of Yom Ha’Atzmaut, in modern Orthodox Jewish day schools, I see girls as young as three and four years old sitting passively while the boys ‘lead’ the daily prayers, many of which are simply reading out loud. Boys have far fewer rules about the way they look, while young girls are told varied metaphors about being so precious they need to stay covered up, or so tempting they need to watch how they sit.

Why aren’t we fighting this? We wouldn’t bat an eyelid about a friend marrying a guy who knows his way around the kitchen, and yet we’re worried about our sons learning how to bake a challah. When a friend makes a sexist joke, we object — but take it on the chin when our kindergarten-aged daughter is told to cover her knees so that men and boys don’t look at her the ‘wrong way.’

Where does our equality go when it’s faced with religion?

And it’s not just us as individuals. I believe it’s the schools themselves, too. Most faith schools would never dream of putting boys on one side of the classroom to study math and science, while encouraging the girls towards art and baking instead. As a parent, you would likely be shocked if your child came home from school and told you that the boys were given complicated discussion-based literature and the girls were handed a pamphlet on how to keep a house and look good. And yet when we separate the boys into the Talmud track and the girls into a class on kashruth and modesty, that’s exactly what we’re turning a blind eye to.

Elana Sztokman, author of Educating in the Divine Image: Gender Issues in Orthodox Day Schools, talks about how her 4 year old daughter, at a Shabbat party in school, was excited to show her knowledge of the blessing over the Kiddush wine. As she stood up to say the prayer, she was mocked – ‘Oh, your daughter wants to be one of the boys!’ which of course, led to her sitting down in embarrassment. Why should her child be made to feel bad about embracing a part of her religion she has every right to experience without shame?

As both parents and schools at large, we need to be saying no to gender stereotypes in the classroom, and opening our eyes to where they exist in the religious contexts of our faith schools.

Why Day Schools Are To Blame For Jewish Gender Stereotypes