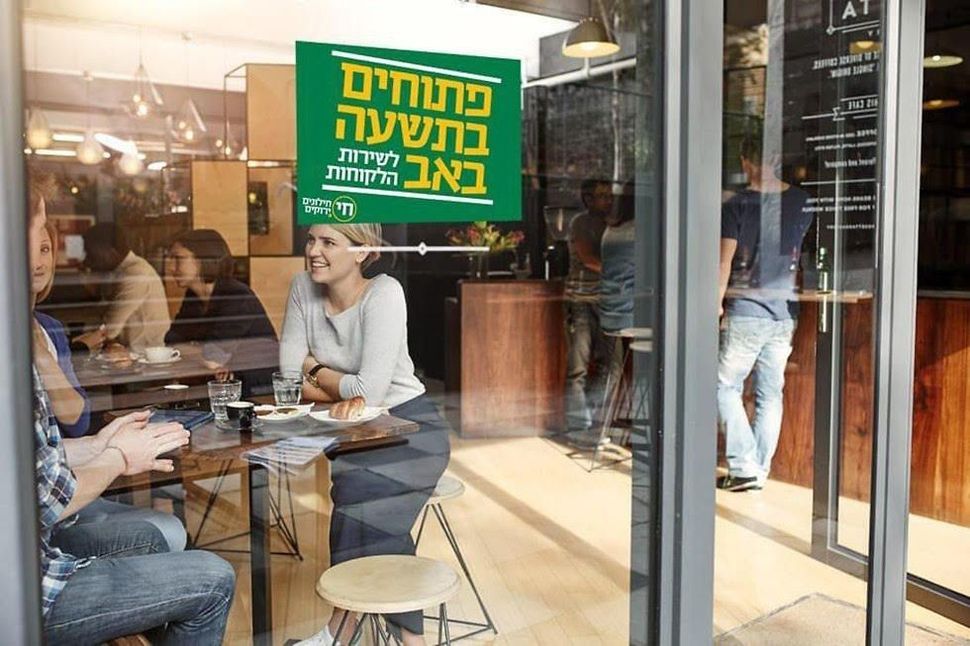 A sticker announces that a cafe is open on Tisha b’Av. Image by Facebook

Should restaurants, bars and coffee houses remain open on the fast of Tisha B’Av, which marks the destruction of the Temple and other calamities throughout Jewish history? Former Tel Aviv city councilman Haim Goren, a member of the Jewish Home party, believes so.

Earlier this month, he posted a video on Facebook asking local eateries to shut their doors on the evening before the fast, which starts at sundown this Saturday. If people drink and party on Tisha B’Av, he said, what is to stop them from doing the same on Holocaust Day or Yom HaZikaron?

“I think that Tel Aviv, as the first Hebrew city in modern times, must have a Jewish identity and I think that Tisha B’Av is one of the most important days for the Jewish people,” Goren told the Forward. “So I think that in Tel Aviv we must respect this day in the public areas.”

While restaurants are technically required to close during the evening, most remain open and pay a fine, Goren explained, adding that the fast was a national day of commemoration and that he wasn’t trying to impose religious values on local residents. “I am thinking about the night. On the day itself, people can go to restaurants, eat and go about their business. I don’t want to tell people what to do, but the night is a symbolic time and it’s important to all of us.”

In response to Goren’s plea, city councilman Reuven Ladiansky, an avowed secularist, called for local businesses to place a sticker in their window stating that they would remain open for the duration of the fast. Ladiansky has previously led several high profile campaigns on issues of religion and state. These include efforts to reduce the influence of the Chabad movement in North Tel Aviv and to ban the pre-Yom Kippur practice of kapparot, in which live chickens are waved over the heads of the devout before being slaughtered and given to charity. While Ladiansky is known for his secularist advocacy, Goren has also made waves in the national media for his calls to remove African migrants from South Tel Aviv.

In a post on Facebook encouraging business owners to put up his stickers, Ladiansky condemned what he saw as a “delusional campaign” of religious coercion and “intimidation” of businesses that remaining open on Tisha B’Av. In response, Goren started his own sticker campaign, distributing stickers reading, “I too am closing on Tisha B’Av,” to ten restaurants. He also accused Ladiansky of showing contempt for the law and acting out of spite.

“I think that he just wants to get people to hear about him because elections are coming up,” Goren said.

While Ladiansky did not make himself available to the Forward, he did tell Galei Israel radio that he wasn’t calling on businesses to remain open on the fast, but that he was offering support to those who chose not to close their doors. “We are providing a service to business owners and the public,” he asserted, adding that he was trying to create pressure to change the law. “We say Tel Aviv is a secular city. Let people open their restaurants.”

Asked how opening a restaurant was any different from an ultra-Orthodox family barbecuing on Yom HaShoah, he replied that the two days of mourning were fundamentally different and that there was no consensus on the traditional fast.

Responses to the campaigns were mixed. Reacting to Ladiansky’s campaign online, one woman said she thought the signs would be “helpful for the secular and non-Jewish population and tourists,” while another countered that she didn’t see the point of the signs.

“If you are open during Tisha b’Av, it will be evident by the lights being on, etc (or people should check your website or Facebook page). Not sure it is necessary to make a whole political stance out of it,” she wrote.

A number of high profile religious freedom campaigners expressed consternation at both Goren and Ladiansky’s efforts, calling them unnecessary and counterproductive. Civil rights activist Rabbi Uri Regev, the director of the Hiddush religious equality NGO, commented that he didn’t believe that the fight had any connection to the “essence of the challenge of religious freedom in Israel.” Regev, who is the former head of the World Union for Progressive Judaism, explained that he personally did not feel comfortable with a campaign to open businesses on a “horrific day in Jewish history.” 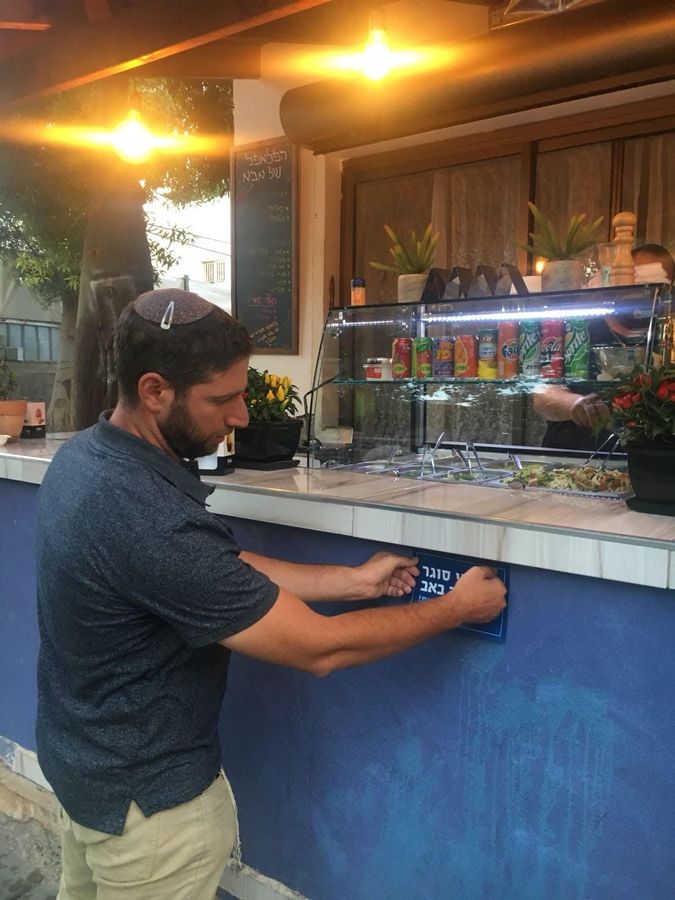 Mickey Gitzen, executive director of the New Israel Fund in Israel and another member of the City Council, advised against looking for ideological motivations for the dueling campaigns and accused both Goren and Ladianski of engaging in “election shtick.”

“There’s not a big ideology behind it,” he said. “It provides a lot of attention. It’s very extreme. I’d like to put Ladiansky and Haim Goren on the same level. I oppose both of them. There is no need for both actions. It’s a big ago about nothing. There are many other good reasons to fight but this is not an issue.”

Seth Farber, an Orthodox rabbi and the director of ITIM, an organization that works to help Israelis navigate their country’s byzantine religious bureaucracy, agreed, telling the Forward that Tisha B’Av “is a day where we are meant to recognize the futility of baseless hatred. In today’s charged environment, this issue illustrates that we haven’t learned the lessons of our history.”