Learning To Forgive Our Children, As Rosh Hashanah Approaches 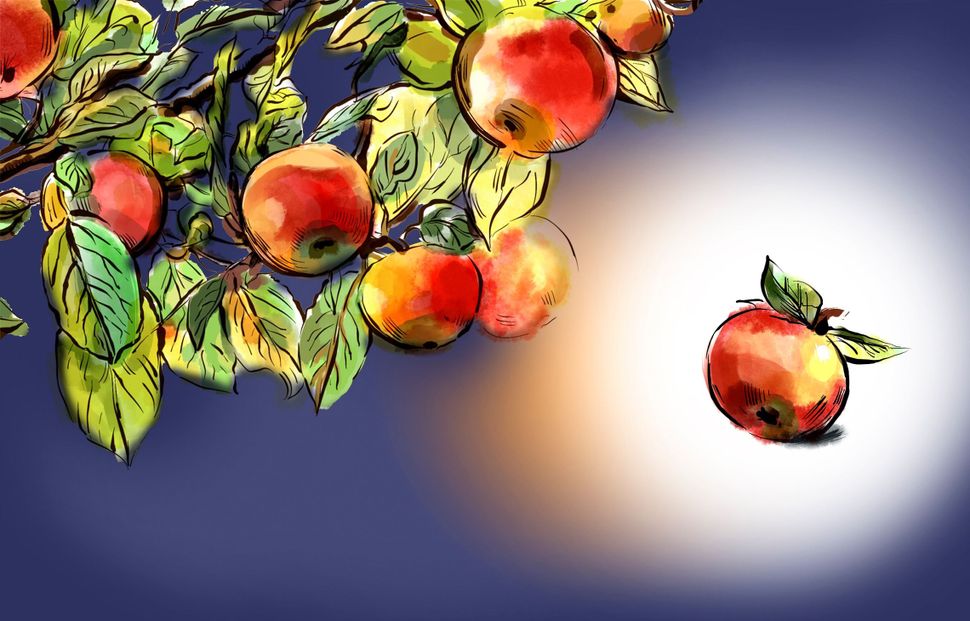 As soon as I learned to read, I became a bookworm. I spent much of my childhood immersed in novels and generally oblivious to the rest of the world. One day in high school, as I made my way down the hallway absorbed in a book, I accidentally walked straight into a brawl and got slammed into a locker. There was so much blood that my parents had to meet me atthe emergency room in the middle of the day.

I always assumed that my children would be early and eager readers too. I began reading to them from the moment they were born – I breastfed them for their first year, and always read to them while they were suckling. I had no patience then for children’s books, and merely read aloud to them whatever I was reading at the time. When they were old enough to sit up beside me, I began reading them picture books, and now that they can sit at the table for a proper meal, I read aloud during mealtimes in the hope that they will be too distracted to fight with one another. These days I read them stories at bedtime while they jump up and down on the bed like monkeys, until invariably one falls off and nearly breaks his or her head. Then I sigh, close the book, and turn out the lights.

My children enjoy hearing stories, but they are equally happy — if not happier — to play interminable card games, or build houses out of Magna-Tiles, or scroll through photos of their cousins on my pilfered smartphone. I was a precocious reader, but they are not. Three of my kids are now school-age; so far none of them is comfortable reading independently. My son still stumbles over nearly every word, and my twins are morally outraged by any book that does not have illustrations. At the public library recently, I found myself looking wistfully, even a little enviously, at other parents trying to tear their children away from their books, making them promise to read just “one more page.” I wonder whether my children will ever be like that.

But as I try to look more deeply within myself in advance of the High Holidays, I am increasingly aware that the flaw is not with my children, but with my own expectations as a parent.

But of course, our offspring are not our clones. They may (or may not) be genetically ours, but they are shaped by different environmental and generational forces than we were. “The apple doesn’t fall far from the tree,” as per the adage, but as Andrew Solomon showed in his monumental book that plays off this title, often quite the opposite is true. Solomon writes about children with severe physical and mental impairments, but his basic premise speaks to universal aspects of the parenting experience. “There is no such thing as reproduction,” Solomon writes, explaining that in spite of the fantasy that our children will be just like us, in reality our children are often veritable strangers: “Parenthood abruptly catapults us into a permanent relationship with a stranger…. We must love them for themselves, and not for the best of ourselves in them, and that is a great deal harder to do. Loving our own child is an exercise for the imagination.“

Fully loving our children requires imagination, yes, but it also requires acceptance and compassion. Just as we did not become our parents—and indeed we often defined ourselves in opposition to our parents—our children are doing the same. If we hold that against them, we are not being fair to them, or to ourselves. We owe it to our children to accept them with compassion, and the liturgy of Rosh Hashanah and Yom Kippur is an annual reminder of how we can, and why we must. The high holiday liturgy speaks often of the metaphor of God having compassion on us like a father is compassionate on his children. Underlying this metaphor is the notion that a parent’s compassion for a child is elemental. The Hebrew term for compassion, Rachamim, comes from Rechem, meaning womb – suggesting that a parent is, by definition, one who is compassionate. In Aramaic, the root word also means “love,” a reminder that love and compassion are semantically entangled. To love our children, we must be able to accept them for who they are, and forgive them for who they are not.

Avivah Zornberg offers a beautiful exploration of this idea in her analysis of the Garden of Eden story in her book, The Murmuring Deep. She notes the root word etzev and its variant form itzavon (generally translated as pain, sorrow, or toil) appear in the punishments of both Adam and Eve after the two eat from the tree of knowledge. First, God tells Adam, “Cursed be the earth because of you; by toil [itzavon] shall you eat of it all the days of your life: thorns and thistles shall it sprout for you” (Genesis 3:17-18). Zornberg explains itzavon as the discrepancy of sowing grains and vegetables only to reap thorns and thistles.

This meaning of itzavon is reflected in Eve’s punishment too: “I will greatly intensify your pain [itzavon] and your pregnancy; in sorrow [etzev] shall you bear children” (Genesis 3:16), Rashi explains that God is not just referring to the pain of labor, but also to the pain of childrearing.

Itzavon, then, may also be understood as the discrepancy between what we dream of for our children, and who they become. “Parents raise children as projections of their own desires, only to discover that children develop desires of their own. Here, the planting may come to bear very little resemblance to the yield,” Zornberg explains.

The punishment of itzavon is an appropriate one, since Adam and Eve disappointed God by n failing to obey His command. God created Adam in His image, and then Adam went off to become his own person, with desires and a will that differed from those of his Creator. God’s experience of itzavon continues in the Noah story, where, as Zornberg notes, the same term appears, this time as a verb: “God saw how great was man’s evil on earth and how every thought devised in his heart was sheer evil all day long. And God regretted that He had made man on earth, and he was saddened [va-yitatzev] to his heart” (Genesis 6:5-6). God’s children have failed to become the creatures He envisioned when He created them in His image. And so this time, God doesn’t just mete out punishment — He destroys the overwhelming majority of humanity.

The story of Noah’s flood is included among the verses recited during the Rosh Hashanah service:As our lives hang in the balance, we want God to remember that He nearly destroyed all of His children once, and then regretted it. “Our father, our king, forgive us… have mercy on us like a father has compassion on his children,” we tell God, even as we know that fathers are not always compassionate, and sometimes accepting one’s children is the most difficult task of all.

Perhaps part of the reason it is so difficult to accept our children is because in order to do so, we have to forgive ourselves. Our children were once a part of us, and it is hard not to think of them as extensions of ourselves. If our children are not like us, then surely we have failed to impart of our values. If I bring books to synagogue for my children to read during services, yet all they want to do is sit there and eat candy, then surely I have done a poor job of transmitting my excitement about literature (let alone prayer). It’s hard not to see it that way. And yet, as the Torah teaches us, the discrepancy between expectation and reality — itzavon — has been a fundamental aspect of our world since the dawn of humanity. Even God could not create a likeness that was an exact replica.

Just recently, while I was reading Charlotte’s Web with my son in the park after school, I noticed he wasn’t paying attention. He was holding a stick and poking at something in the dirt. “It’s a dead spider,” he told me. “I know it’s dead because on a dead spider, the legs always turn inwards, because there’s no more blood holding them up. That’s how you can tell. Right?”

I hadn’t known that. If my son were exactly like me, he would have been entangled in the story of Charlotte and her web. Indeed, it’s thanks to the fact that my son has elected to spin his own web that he has so much to teach me. It’s taken me a while to learn this lesson, and I can only hope that he — and all my children — will forgive me for that.

Ilana Kurshan is the author of If All the Seas Were Ink, winner of the 2018 Sami Rohr Prize for Jewish Literature.

Learning To Forgive Our Children, As Rosh Hashanah Approaches