Why Are Jews So Obsessed With The Study Of Halacha, Religious Law? 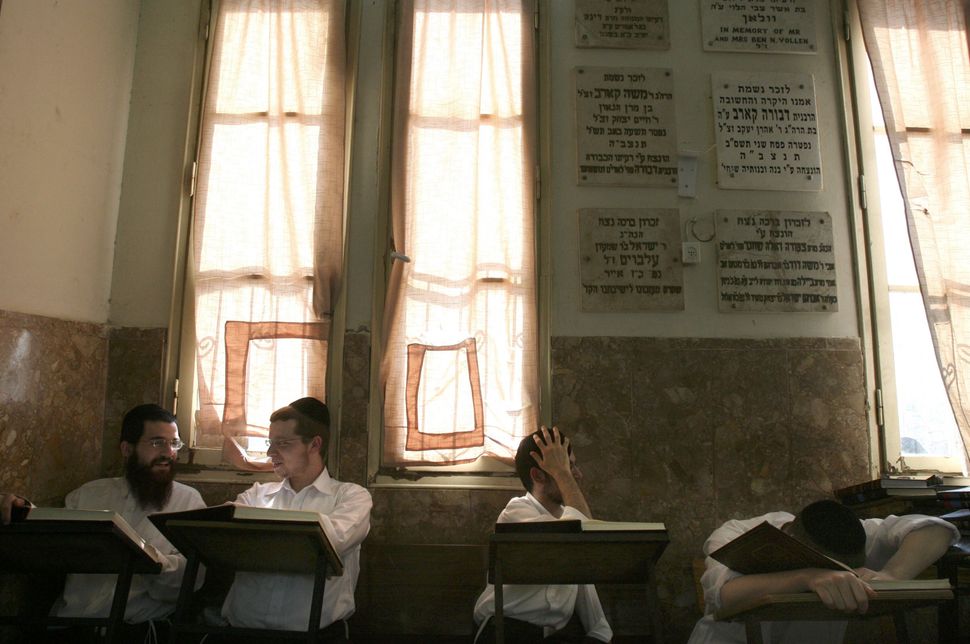 Religious Jewish yeshiva (seminary) students pray in the synagogue at the Ponovezh Yeshiva, where they live and study for as many as nine years after high school, May 11, 2006 in the ultra-Orthodox city of Bnei Brak in central Israel. Image by Getty Images

I am not particularly interested in halacha. I enjoy studying Talmud because the emphasis is on the questions rather than the answers; I am less interested in how Jews are supposed to practice, and more interested in the values and considerations that animate the discussions about Jewish religious observance.

I think of Talmud and halacha in terms of Schroedinger’s Cat Paradox. According to this thought experiment, by now a quantum mechanics cliché, a cat is placed in a box where there is an equal probability that a deadly poison is or is not released. Only when the box is opened is the state of the cat established with certainty. Talmud fascinates me because the cat is simultaneously both alive and dead, with all the interpretive possibilities still open, whereas halacha collapses the dancing wave function into a static mode of practice.

But perhaps the time has come to reconsider.

In his new book Halakhah: The Rabbinic Idea of Law, Chaim Saiman argues that halacha is so much more than just prescriptive law because it plays both a regulatory role—governing Jewish religious practice, and also an educational role—serving as the object of devotional study.

Jews study halakha not just to learn how to behave, but also because halakha serves to communicate social and religious meaning.

And so while much of the content of Talmud study is similar to what is taught in American law schools, for Jews it is regarded as one of the purest forms of divine worship. Rabbinic case studies—when Reuven’s ox falls into Shimon’s pit, for instance—are not just precedent-setting, but value-laden. This is true of the Talmud, but it is also true of subsequent halachic works such as the Tur and the Shulhan Arukh, which are not merely laws to be applied, but discourse to be studied. Thus legal ideas are pursued to further broader social and cultural aims. As Saiman puts it, “Halacha is not only a body of regulations, but a way, a path of thinking, being, and knowing.”

In his opening chapter, Saiman responds to Jesus’ critique of halacha as an obsessive preoccupation with legal minutiae (“Woe to you, teachers of the law and Pharisees, you hypocrites!”) by arguing that halacha consists of a discussion of the central questions of religious life through the lens of legal norms. Even the most seemingly obscure or technical halachic matters are informed by broader ethical and philosophical concerns. Questions such as “what is justice” and “what is beauty” are anchored in discussions about particular commandments.

Perhaps Jesus failed to understand that the Talmud’s seemingly obsessive legal commands are the prism through which weightier issues are revealed. Historically this may have been an attempt to infuse deep significance into laws that often seemed, even to the rabbis, arcane and irrelevant, but however it happened, halacha became the language for probing and articulating foundational Jewish questions. Halacha, then, is not merely a legal code — it is the language of Jewish thought.

Saiman, a law professor at Villanova, frames his book by showing how halacha is different from American law, or German law, or any other state-based legal system. This approach enables him to discuss halacha in the terms of Western jurisprudence—concepts such as legal formalism, Aristotle’s idea of corrective justice, and Antonin Scalia’s understanding of the “rule of law.” And yet perhaps the more apt comparison to halacha is not state law, but other systems of religious law, such as Muslim Sharia and Buddhist Dharma. True, Americans are unlikely to gather together to study the Constitution for their personal enrichment; but do Muslims and Buddhists regard their religious legal codes as objects of study? How unique is halacha as a system of religious law? These questions obviously fall beyond the purview of Saiman’s book, but they raise questions about the author’s point of comparison.

As Saiman sees it, the ideal of Talmud Torah, in which Jewish law is an object of religious study, is one of two ways in which halacha differs from state-based legal regimes. The other is that halacha, which emerged after the destruction of the Second Temple and the collapse of Jewish sovereignty, is the law of a people rather than the law of a state. For nearly all of its history—until the foundation of the State of Israel, whose implications for halacha Saiman explores in his book’s final chapter — halacha could not realize its full regulatory scope because Jews were living in the diaspora, governed by the laws of the countries in which they resided.

As a result, halacha often speaks the language of “as if,” detailing regulations about crime and punishment as if the Jewish court, the Sanhedrin, still functioned in Jerusalem, and detailing sacrificial law as if the Temple were still standing and operational. In this sense, halacha is timeless, hearkening back to a sovereign past and to a messianic future. Many of the laws that are part of the halachic system have been irrelevant in terms of practice throughout the history of halacha, and yet, as Saiman notes, “neither the remoteness nor even impossibility of applying halacha does anything to dampen the rabbis’ ardor for legislating and debating its rules and procedures.”

In offering close readings of Talmudic passages to explore the rabbinic idea of law, Saiman’s Halakhah joins other books that seek to explain the workings of Jewish law to a broader Western audience, including several published in the past few months: Barry Wimpfheimer’s The Talmud: A Biography, Ayelet Hoffmann Libson’s Law and Self-Knowledge in the Talmud, and Leon Wiener-Dow’s The Going: A Meditation on Jewish Law. All of these books share, to an extent, Saiman’s avowed goal of “explain[ing] halacha as experienced from within (or at least the view from within one room of the halachic castle) to an audience standing outside it.”

But although Saiman writes that his book is for outsiders, his perspective on halacha—as someone who knows it intimately, but reads it as a legal scholar through the lens of legal theory— may well stimulate many students of the halakhic corpus to view it in a new light. He calls our attention to the oddity of much of what traditional students of Jewish law take for granted – that imagined legal realities are interspersed with daily practices, that discussions that appear merely technical are pregnant with philosophical and existential meaning, that the Talmud “reverse engineers” broad halachic ideas from specific regulations. Saiman masterfully succeeds at once in clarifying the unique discourse of halacha for those who have never encountered it, while clarifying to those most familiar with halacha just how unique it is.

As someone who engages creatively with the Talmud, I have moved beyond the analogy of Schroedinger’s cat and found instead another scientific metaphor: Halachah as DNA. DNA is the language of life. Parts of the sequence of nucleotides in DNA code for proteins, and other parts — known in molecular biology as “junk DNA” — serve no coding function.

Likewise, part of halacha codes for aspects of Jewish religious observance, and other parts consist of ethical and theological discourse, non-applied halacha, minority opinions which are not followed, and laws which are interpreted out of existence.

Just as “junk DNA” is not really junk, but serves to increase the possibilities for recombination, so too the non-coding aspects of halacha serve to allow for increasingly creative readings and re-interpretations of halachic discourse. I am still drawn to the non-coding aspects, certainly when it comes to the Talmud. But I’ve come to appreciate that halacha is the two-thousand year old language of Jewish life, and, like Hebrew, one’s Jewish education will always be limited until one becomes conversant in it.

Why Are Jews So Obsessed With The Study Of Halacha, Religious Law?