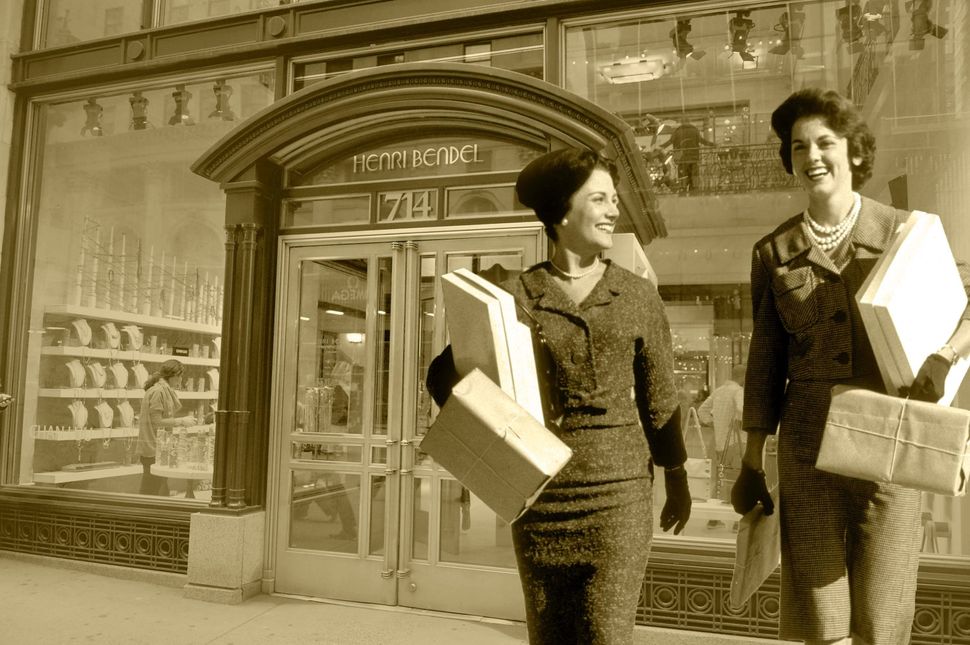 After 123 years in business, Henri Bendel’s announced last Friday, September 14, that it will be shuttering its doors and going out of business. The closing of Bendel’s wasn’t entirely unexpected — brick-and-mortar retail had been struggling against the onslaught of ecommerce, and Bendel’s struggled with finding its niche among other luxury retailers.

It’s fitting though, that this should be announced right after Rosh Hashanah. Bendel’s was, despite it’s very non-Jewish beginnings, an integral part of the Jewish American upwardly mobile middle class. It was one of the three “B”s — Bergdorf’s, Bloomies, and Bendel’s — that a well-off Jewish woman was socially almost-required to shop in.

Despite the fact that Jews represent only .1% of the population (and Orthodox Jews only 10% of that), go into any of those three stores in NYC on a random day during the week, and you could be assured of seeing at least four sightings of Orthodox Jews, with half of them being Hasidic women with hats perched on top of sheitels, often pushing strollers or trailed by children.

Bendel’s wasn’t exactly expensive, at least compared to Bergdorf’s or Saks, but it was a brand name. The kind of name you could throw casually into a conversation — “Oh, this little thing? I got it from Bendel’s.”

Maybe it was the way the Henri was spelled with an “i”, a la francaise. Like most of white America, American Jews confer particular prestige to anything that sounds remotely French (and, to a lesser, but still important degree, Italian).

Or maybe it was the holiday windows that became a part of the annual Hanukah walking tour of the Upper East Side — the fantastical scenes reminding us Jews that despite not being able to celebrate Christmas, we can still receive some sort of visual gratification from the holiday. The flagship store, with its gilded, finely wrought architecture, spoke to a genteel WASPy-ness that every Jew secretly desires acceptance from (listen, it’s not our fault, we’ve been like this since we begged Samuel the prophet to anoint a king “like the rest of the nations”).

The story of the end of Bendel’s is a uniquely American one — fashion conglomerate L Brands, which also owns Victoria’s Secret, could no longer justify Bendel’s existence to its investors, because Bendel’s was operating at a loss.

But Bendel’s also struggled with establishing an identity. Back in the day, Bendel’s was on the cutting edge of retailing, becoming the first American store to sell Chanel in 1913 and hiring Andy Warhol as an in-house illustrator in the 1960’s. It was cool, it was hip, and it personified luxury. And then, in 1985, it was acquired by L Brands. L Brands decided to expand Bendel’s, but it never really took off. By 2009, the conglomerate was looking to cut costs and stopped selling clothes in favor of selling strictly accessories and gifts.

It worked, for a time. But then they went further — in 2014, in order to try and establish a specific brand identity, they stopped selling outside brands in favor of their own private-label accessories. According to the Post [LINK], that was the beginning of the end: “The company’s focus on its own private-label accessories and handbags ”fell flat” — with designs that looked like cheap Michael Kors and Kate Spade knock-offs,” according to retail consultant Gabriella Santaniello of A-Line Partners.

And just as the prestige of Bendel’s withered and died, so too did the Jewish obsession with Bendel’s.

And although we stand together, mourning this great institution that has served the monetary aspirations of our community so well, our shopping life will live on.

After all, there’s always that other “B” — Barneys NY.