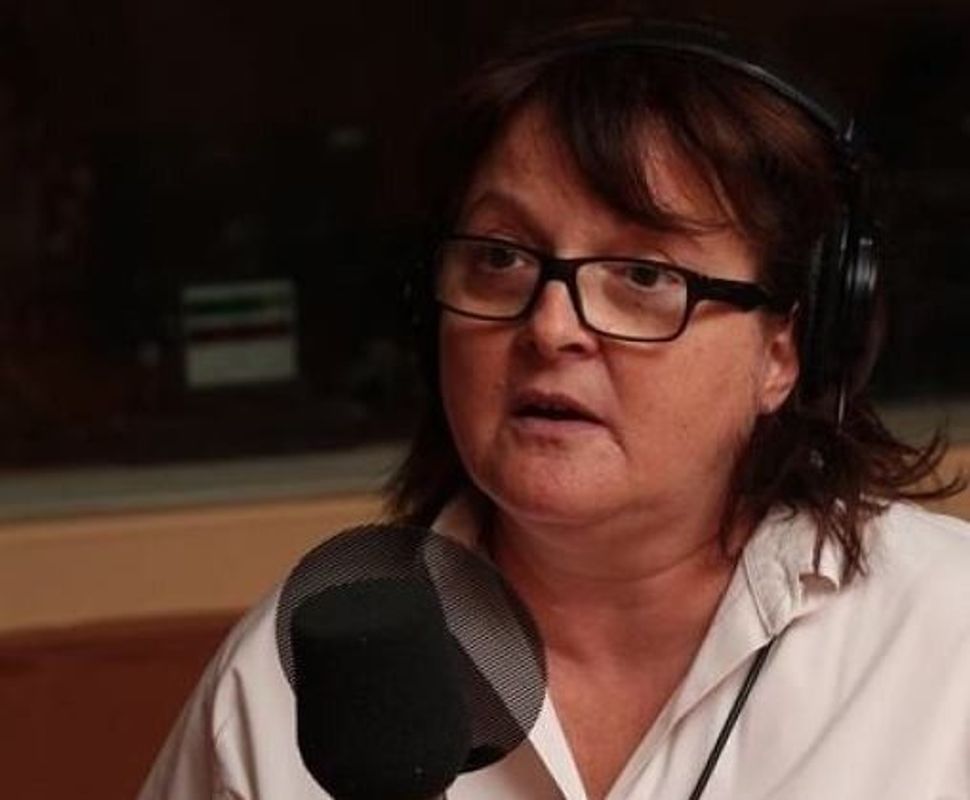 Born into a French-Canadian family and educated by nuns, Lise Ravary makes an unlikely Jewish voice. But since converting to Judaism nearly two decades ago, Ravary’s widely read opinion columns have brought a singular perspective to Quebec’s complex politics.

By pulling no punches — in a place where sensitivities around language and identity run deep – Ravary has become a lightning rod. The onetime music journalist, who writes in English and French for Quebec’s leading dailies, revels in flouting conventional wisdom; a recent Montreal Gazette column disputing the cliche that French Quebecers are racist managed to inflame all sides.

The Forward caught up with Ravary on the eve of a contentious Quebec election on October 1; one candidate has been accused of anti-Semitism, including a 2011 tweet that she “forgot to celebrate Adolf Hitler’s birthday.” The front-runner party also supports legislation that would ban public servants from wearing “religious signs”, including kippot.

Michael Kaminer: First things first: Is anti-Semitic rhetoric tainting the campaign leading up to the October 1 election in Quebec?
Lise Ravary: There’s no anti-Semitic rhetoric in the province. Before the campaign started, everyone thought immigration would be the major issue, and when you talk about immigration, you’re mostly talking about the integration of Muslim immigrants. But now, it’s all about the economy, healthcare, and education. Those issues are far ahead of anything else.

But some politicians have spoken against Orthodox Jews in neighborhoods like Outremont [in Montreal]. Is that a concern? The ultra-Orthodox Satmar community has been a problem of neighborly relations in Outremont for many years. It’s been difficult. Can you criticize them? Yes, as long as it doesn’t become a personal thing. The issue this week was someone who was accused of being anti-Semitic because they said the Satmar live apart. That’s not anti-Semitic, that’s a fact. That’s saying, “that’s how they live, and I wish it wasn’t so.” Integration is always the central issue.

In online comments, people get very vocal about your columns, sometimes from opposite points of view. What buttons are you pushing? I’m painfully honest and politically incorrect, saying things people don’t get to hear publicly. I do the same thing in French, where I bring Anglophone and Jewish points of view. I think I’m saying things that basically no one’s said before. I’m bringing conversations from around my table to public knowledge.

Your conversion to Judaism fascinated people – your 2013 book “Pourquoi moi? Ma vie chez les juifs Hassidiques” [Why me? My life among the Hasidic Jews], was a bestseller. What was that journey?

I grew up a Catholic – convent school, nuns, everything. But I was never a deep believer. Then I went through some hard times, including addiction. In 12-step, they tell you to find higher power. I wasn’t into that. A couple of years later, I was invited on a press trip to Israel – to discover Israeli cuisine! I thought, maybe this is where my Catholic spark would shine on my life. Didn’t happen. But Friday afternoon, we went to the Kotel in Jerusalem, and I know it sounds incredibly stupid, but I had a moment. I remember walking toward the wall through the plaza. Half of me is saying, “Thank God, you’re home”. The other half is saying, “Are you nuts?”. I was shook up.

What happened once you returned to Montreal? I started reading. I didn’t even know you could convert to Judaism. Over the next few months, I met all kinds of people, and got invited to homes for Shabbat. The ones who took me in, the ones who didn’t make me feel like I was crazy, were the Lubavitch. When I spoke to Reform rabbis, they did look at me like I was crazy. One actually said, “If you want to keep kosher, you must want a kosher stomach.” It was insulting. I have a zillion disagreements with ultra-Orthodox, but they were welcoming.

You grew up in a Francophone household in east-end Montreal. Were Jews demonized? In the Montreal suburbs where I grew up, the subtext was often “us vs. them”.
No, no, no. This is a major misunderstanding. The anti-Semitic past of Quebec was the business of the elites. Working-class people had a different point of view. Both my parents thought Jews were hard-working, believed in education, looked out for each other. My father used to say “That’s what we French-Canadians need to do, but we’re too stupid.” [laughs]. A lot of shop-owners on our street were Jewish.

Are there remnants of that legacy of anti-Semitism in Quebec today?
Let me put it this way: We don’t have even an organized right-wing political party. The problem is more on the left – people against Israel, the BDS movement. There’s an unholy alliance in Quebec, as in many places, between the left wing and Islamists. And there is a lot more ignorance than deeply felt, deeply held anti-Semitic opinions.

What’s your prediction for Quebec’s October 1 election? The center-right party, the Coalition Avenir Quebec [CAQ], is going to get elected. People want to get rid of the Liberal party, which has been in power for 15 years.

But the CAQ supports the prohibition of “religious signs” in public life, including kippot. Should Jews worry? The background to this is important. Québec models its separation of church and state on France, where governement employees – including teachers and doctors – cannot display their faith at work by wearing an ostensible religious sign, including a kippah. The Parti Quebecois tried to impose this and were voted out despite fairly wide appeal with Francophones. The in-between solution proposed by the CAQ is be to ban religious signs for police, judges and prison guards — people in positions of authority acting in the name of a secular state. But I can’t think of a single jewish judge in Canada who wore a kippa on the bench.

And what’s your read on US politics at the moment?
Oh, dear. First of all, sadness. I’m sad because I’m a great fan of the US. To see it going through this phase is painful to watch. We’re all keeping our fingers crossed that the effects won’t be permanent. But I worry.