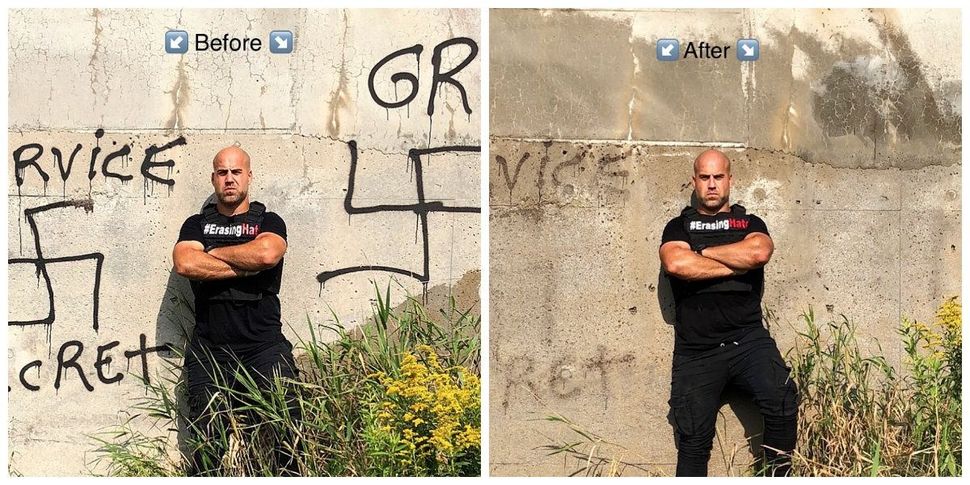 Fleischer on Instagram, August 24, 2018 Image by Courtesy of Corey Fleischer

A power washer — the latest in sophisticated anti-hate technology?

Corey Fleischer is the founder of “Erasing Hate,” a movement dedicated to removing graffitied hate speech from public spaces. He’s been servicing his Montreal community and many others for over eight years. And it all started when the power wash specialist was on his way to a job when he stopped at a red light and noticed an enormous swastika painted on a cinderblock.

He continued driving. But something gnawed at him, some internal voice pleading with him to do something about the Nazi symbol. “The second I drove by it, I regretted it,” he said. So, he contacted the woman whose house he was supposed to be power washing, and told her that his machine broke down. He sent all his workers home. And then, with newfound purpose, he went back to the corner to wash away a mark that will forever remind Jews of the Holocaust and the hate that still exists today.

After graduating from college, Fleischer didn’t have much direction. “I was seeing everyone going on their path, making a difference and I was just washing regular things,” he said. But all that changed on that day on the way to work. “The 15 seconds it took me to remove that [swastika] was something I was searching for my whole life. It was like an epiphany moment, like this was it,” he adds. For the next five years, the peace-promoting power washer kept his work quiet. Friends and family expressed skepticism about his passion project. But as years passed and instances of public anti-Semitism drew greater notice, Fleischer’s pro bono venture garnered thousands of followers on Facebook and Instagram. His latest video, which shows his speedy removal of a rude phrase graffitied on an ad featuring a Muslim woman, amassed over 100,000 views. Hatred against women, religious, sexual, and ethnic minorities, seems to be everywhere. And Corey Fleischer will stop at nothing to remove all traces of it.

When I asked Fleischer if he ever experienced anti-Semitism that prompted him to take on this work, he explained, “There wasn’t a traumatic experience with anti-semitism that made me do this. But I’m an extremely proud Jewish person. I’ve never hidden that I was Jewish.” Anti-Semitism, he says, is not something new — he hasn’t seen an increase in hate symbols over the years, he says. And he praises social media, a force he believes has made people aware of the hatred in their cities, and determined to rout it out.

With a ballooning social media presence and a TedXTalk under his belt, Fleischer hopes that this is just the beginning for Erasing Hate. He plans to take the organization on tour to Germany, France, and Italy. They just received a $15,000 grant from InnuScience to create an eraser that will have an effect on marker.

Everyone, pencil-in “a better future” on your calendars.