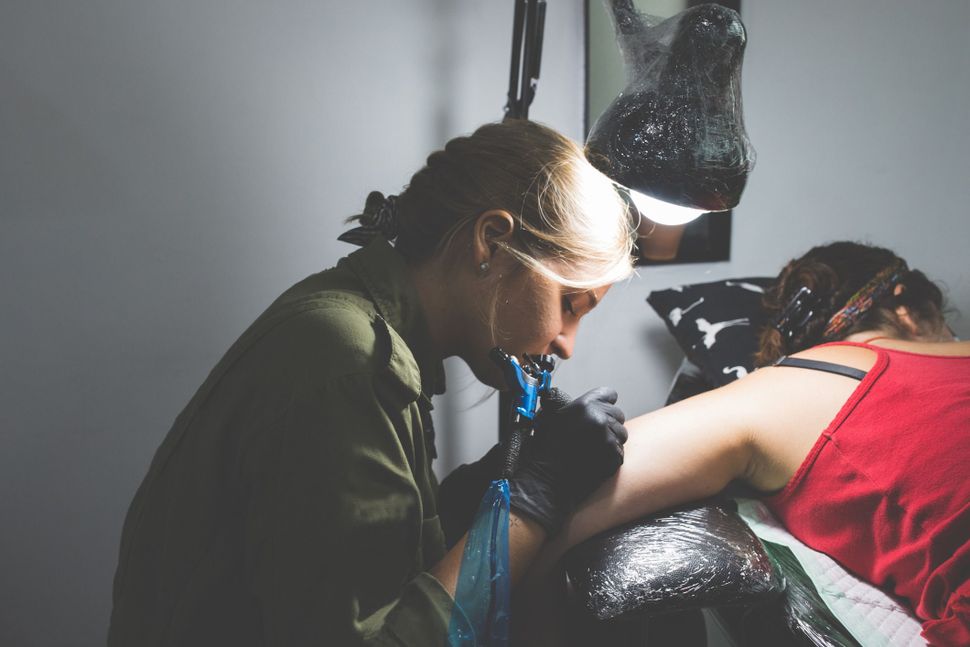 For long as I can remember, I have been captivated by tattoos. I love the variety, the creativity, and the idea that your body can be a canvas for art. As a serious lover of heavy metal, this tatted-up aesthetic makes me swoon.

I have lusted after tattoos for my entire life — even in the years I was a practicing Orthodox Jew — but only got my first at the age of 42.

Though I admired ink, I never felt like this was a choice for me because of religious constraints within Judaism. The Torah forbids this in no uncertain terms: “You shall not make any cuts on your body for the dead or tattoo yourself. I am the Lord.” (Leviticus 19:28). I won’t twist or try to reinterpret the Torah to rationalize my decision, because it would be intellectually dishonest and self-serving to do so.

But at 42, I reached a point where I didn’t find that prohibition compelling anymore.

After 18 years of practicing Orthodox Judaism, I ceased being observant when my husband, children, and I moved to Seattle, Washington, after 22 years of living in Washington, D.C. With this change in religious practice came the admission that I was violating many other precepts in the Torah, and that getting tattooed was just another to thing to add to my unofficial “Sinner” badge — and a permanent sin, at that.

Regardless of observance, there still remained a cultural hurdle to me getting inked. There is a strong cultural taboo in Judaism against tattooing even amongst totally secular Jews. I assume this is because Jews were forcibly tattooed during the Holocaust, and because of a myth that burial in a Jewish cemetery is prohibited if one is voluntarily tattooed. I am convinced that this was started by some Bubbe desperate to keep her grandchild from getting inked, and I raise my glass to her, because that rumor had legs.

There were still two obstacles to overcome: First, my husband, David, still is an observant Jew. While he didn’t like my choice, he always has my back and wisely concedes that my decisions are my own. In a demonstration of true love, he helped me put the Aquaphor on my healing tattoo.

My second concern was for my children. Because they go to an Orthodox school, would there actually be people who would hold my decision against them? I am still worried about this, but at the end of the day, it’s more my unconventional opinions and strong personality — rather than my actual tattoo — that could make me objectionable to a religious family. I hope that people won’t hold my actions against my daughters, and if they do, they are not the kinds of people I want in our lives anyway.

Even after I put down the deposit for my tattoo, I wrestled with it. Some of this was generalized anxiety, but more of it centered on religious and cultural concerns. I felt better, but still conflicted, come my appointment in June, so I rescheduled for August. A tattoo is forever and I wanted to feel confident and joyful about my decision. Part of how I resolved my ambiguity was researching, reading about, and talking to other inked Jews, and watching the movie, “Tattoo Jew.”

By August, I no longer felt conflicted and was eager to move forward. The tattoo artist and I expanded the design significantly at the last minute, which necessitated moving it from my shoulder blade, where it would rarely be seen, to high up in the middle of my back. It turns out most of my shirts don’t go far enough up to hide it easily, which in a way I find a relief: I don’t have many secrets and try to practice being radically authentic. This tattoo is totally me, and I don’t want to routinely cover it up. I also love the art and want people to see it. However, because I still have a foot in the Orthodox world, there are times I certainly would want to be able to be discreet, and luckily, a sweater suffices.

If you are imagining a small, cute tattoo, think again: This is a very detailed gray and black skull with my favorite flowers surrounding it and growing out of the skull’s eyes and is about the size of a man’s hand. It is intense, like the woman it is on. I am overwhelmingly happy with my decision to get inked. I realize that this might have social consequences, but I would rather risk those than live a life where I am living for others instead of myself. Someone asked me whether I thought that getting a tattoo was a bad example for my Jewish daughters, and I replied that the truly bad example would be cowering to fear about what other people think.

Ultimately, my decision to get inked is a story about our relationship with Judaism and the Divine changing as we change. My religious journey has not been one about leaving Judaism or forsaking belief in God. In fact, this is a point of divergence between me and many of my peers commonly referred to as “off the derech.” I still find Judaism beautiful and relevant. I very much believe in God, but the God I believe in now wouldn’t be angry about or punish me for getting tattooed.

There are many ways to relate to God and the Torah. Yes, the Torah is a book of laws, but it’s limiting to say that’s all it is. The Torah also is a book of heart: It is full of examples of God’s love for humanity, our love of God, and the love that we should demonstrate toward each other. In fact, the last letter of the Torah is lamed in the word “Yisroel”. The first letter of the Torah is the bet in “Bereshit”, Genesis. Together, those make the word “lev,” heart.

My relationship to and practice of my religion has changed, and I ultimately chose to follow my heart and do something extremely meaningful to me — and that choice does not diminish my connection to Judaism or to God.

Sarah Barak is a writer and stay-at-home mom in Seattle, WA. Her greatest passion besides her family and friends is enjoying recorded and live heavy metal and hard rock music. You can read more of her work at SarahBarak.com