Don’t Avoid Talking To Your Kids About The Pittsburgh Shooting 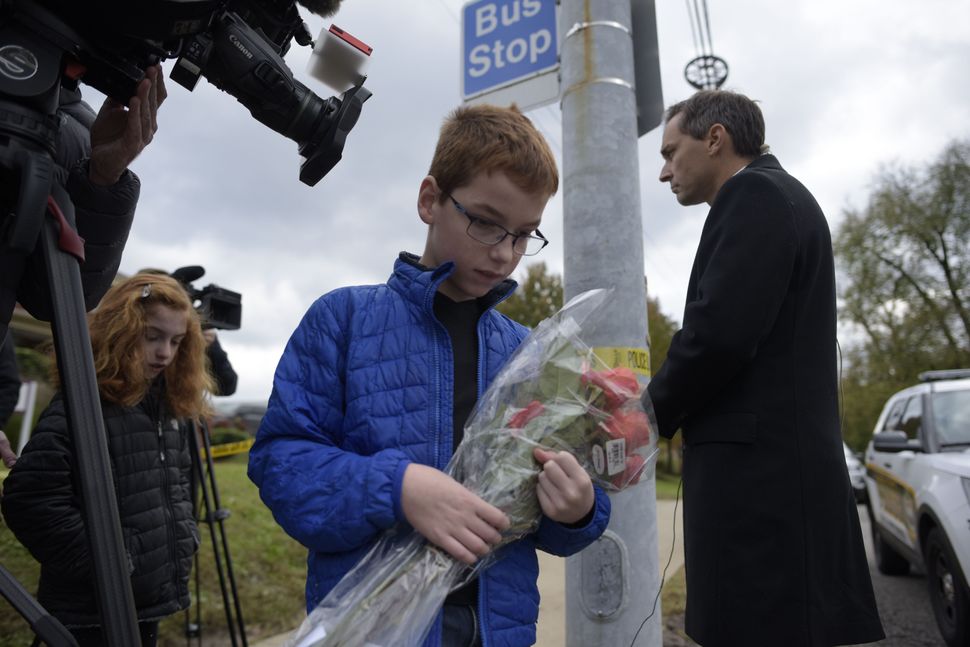 A young boy brings flowes to a memorial on October 28, 2018, near the Tree of Life synagogue after a shooting there left 11 people dead in the Squirrel Hill neighborhood of Pittsburgh on October 27, 2018. - A man suspected of bursting into a Pittsburgh synagogue during a baby-naming ceremony and gunning down 11 people has been charged with murder, in the deadliest anti-Semitic attack in recent US history. Image by DUSTIN FRANZ/AFP/Getty Images

‘For these things I weep, my eyes flow with tears,” reads the Book of Lamentations, and my mind plays on continual loop all the tragic details we now know about the shooting at Pittsburgh’s Tree of Life Synagogue, likely the deadliest attack on Jews in the history of America. Yet the lament continues with the words “my children are forlorn,” and I am suddenly brought back to my own children, whom I hug tightly.

As a mother of three children, I want to hold my children close and shield them from the rising tide of anti-Semitism and the ever-present threat of gun violence in America. I don’t want them to know anything of the terrible loss and pain that has shattered the Tree of Life Synagogue and all who hold it dear. I’d rather keep their precious childhood conversations focused on the World Series or our latest game of Monopoly or a beloved book that we are reading yet again.

But as a scholar who studies the developmental trajectories of American Jewish children, I know that when tragedy strikes anywhere in the Jewish community, children learn about it. And therefore, as a parent, I have only two choices: to speak with them about what’s going on, difficult as that may be, or to let them process it on their own. I choose the former.

My research on American Jewish children has shown that kids as young as 5 years old have a sense when things are not right. When the adults around them are anxious, sad, or angry about current events—as so many of us are right now—5-year-olds know.

By the time children are 7 or 8, they begin to piece together bits of information, mentally reconstructing a partial version of current events like fitting together the pieces of a puzzle. They gather their puzzle pieces from so many places that adults may not even realize. A child overhears a conversation among adults. She reads the headlines scrolling across a television newscast playing on silent in a family restaurant. He watches over his mother’s shoulder as she scrolls through Facebook on her phone. Seeing their parents upset, they head online to search for more information about what is causing the trouble.

At age 10 or 11, children can situate current events in larger political and historical frameworks. One tragedy calls up another, and children begin to consider what these events mean not only for their own sense of personal safety, but also for the broader communities in which they live. They’ve already had years of practice sleuthing for information about a world which they view with equal measures of cautious fear and youthful optimism.

The impression that children must be protected from knowledge of violence and tragedy is well-intentioned, but ultimately misguided. Scholars have long recognized that children are capable of learning about difficult topics, and some have even shown that learning about difficult current events can actually enhance children’s ability to cope with the world. Especially in this era of easily accessible information, it is increasingly clear that even when adults want to shield children from the harsh realities of the world, it is unlikely that they can.

So hug your kids…and then tell them about the deadly shooting at the Tree of Life Synagogue in Pittsburgh. As difficult as it may be, it’s much better that they have an opportunity to process it with you than that they be left alone to wonder and to worry. Your voice may catch, and you may stumble over your words, because there are no words to adequately explain the loss, the sadness, the anger. Tell that to your children. Because if you are a parent, you don’t have the luxury of silence. Your children are listening.

Sivan Zakai, Ph.D., is the Sara S. Lee Assistant Professor of Jewish Education at the Hebrew Union College-Jewish Institute of Religion and an affiliated scholar at the Jack, Joseph, and Morton Mandel Center for Studies in Jewish Education at Brandeis University.

Don’t Avoid Talking To Your Kids About The Pittsburgh Shooting