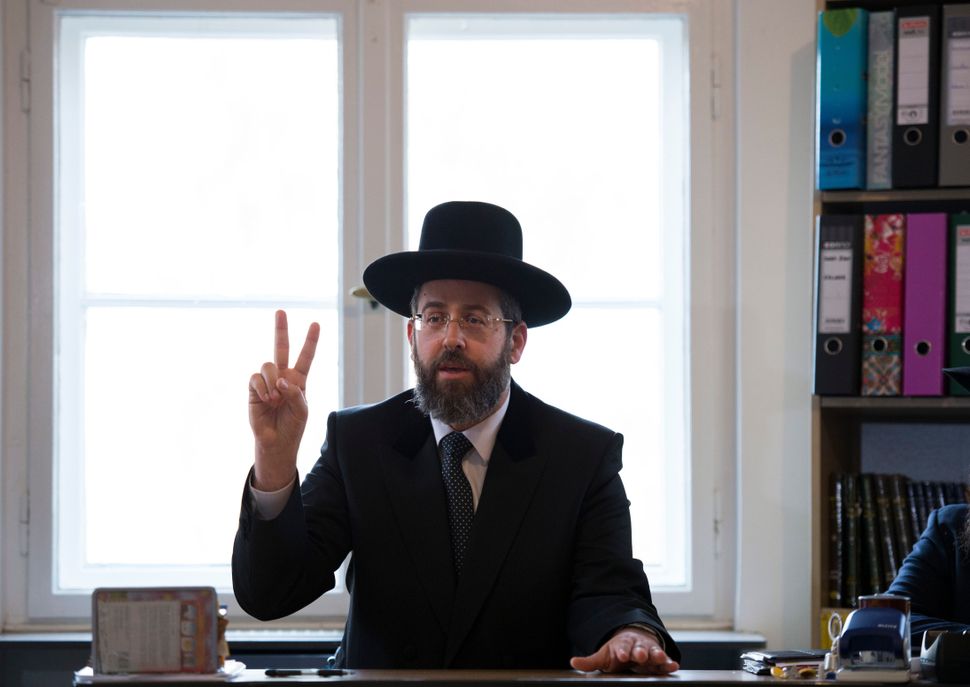 David Lau, Ashkenazi Chief Rabbi of Israel gestures as he visits the Or Avner traditional Jewish school in Berlin, on November 8, 2013 to speak with children about the Kristallnacht aka Night of broken glasses, the November 1938 anti-Jewish pogromas events get underway to mark the 75th anniversary of the attacks. Image by Getty Images

Several news organizations (including this one) jumped on an interview with Israel’s Chief Ashkenazi rabbi, Rabbi David Lau, in response to the Pittsburgh shooting.

Lau, according to the report, refused to acknowledge that the massacre in Pittsburgh was carried out in a synagogue. The story sparked outrage all over social media, some calling to abolish the Israeli rabbinate while others wondering if Lau even acknowledges non-Orthodox Jews as fellow Jews.

But Lau’s quote was grossly taken out of context — not a single news report actually quoted the full interview, in which the rabbi mourned the victims and emphasized that a conversation about denominational differences is irrelevant here.

For those American Jews who don’t read Hebrew — far too many, it seems — I replicate here the original words of Rabbi David Lau, when asked by a Makor Rishon reporter about his attitude to the Conservative affiliation of the shooting’s victims:

Lau was asked to comment on the ultra-Orthodox Israeli news outlets’ coverage of the massacre, which refused to call the Tree of Life Synagogue a “synagogue” but rather calling it a “Jewish center.”

Lau was evidently aghast. “How is that relevant? Don’t bring that up in [connection to] this topic. We are talking about Jews murdered because they are Jews. Why is this even a question?! I don’t hear or understand what kind of a discussion can be in regard to this question. They were murdered because they were Jews. Why does it matter in what synagogue or what liturgy they were praying?!”

He went on, “I repeat: We are talking about Jews and we cannot take advantage of unnecessary moments. We cannot turn this pain into a topic of debate – this is not a topic [of debate] at all. Yes, I have a hard ideological difference with them, on the subject of Judaism, about its past and its implications for the future of the Jewish people throughout the generations, so what?! But because of this, they are not Jews?!” (Punctuation original.)

The reporter pressed onward, intent on nabbing this headline — “But it was indeed a synagogue?”

To which Lau answered: “Jews were murdered in a place where the murderer saw a place with a prominent Jewish character, a place with Torah scrolls, Jews with prayer shawls, there are siddurim (prayer-books) there, there are people who came there for the sake of closeness to God. The reality is that the murderer went to murder specifically there, and not to another place. Over this, there is pain and anger.”

Some interpreted this a question dodge — but that’s a deliberate stretch, one that is politically fueled and deeply divisive.

Lau was using a classic, emotional description of a synagogue, a description that he knew would resonate with his readers. He depicted a synagogue scene in detail, so Orthodox readers would relate to it beyond denominational differences — “Torah scrolls…Jews with prayer shawls…siddurim.” Lau explicitly described the Tree of Life as a synagogue, as a place people go “for the sake of closeness to God,” when saying, “Why does it matter in what synagogue or what liturgy they were praying?!”

Criticize the Israeli rabbinate all you want — but reading into the chief rabbi’s horror over this massacre, and using it as a way to sow division between American and Israeli Jews, and between Orthodox and non-Orthodox Jews, is really not what we need right now, while the dead still lay unburied.