Finding Solace In Shabbat, After Pittsburgh 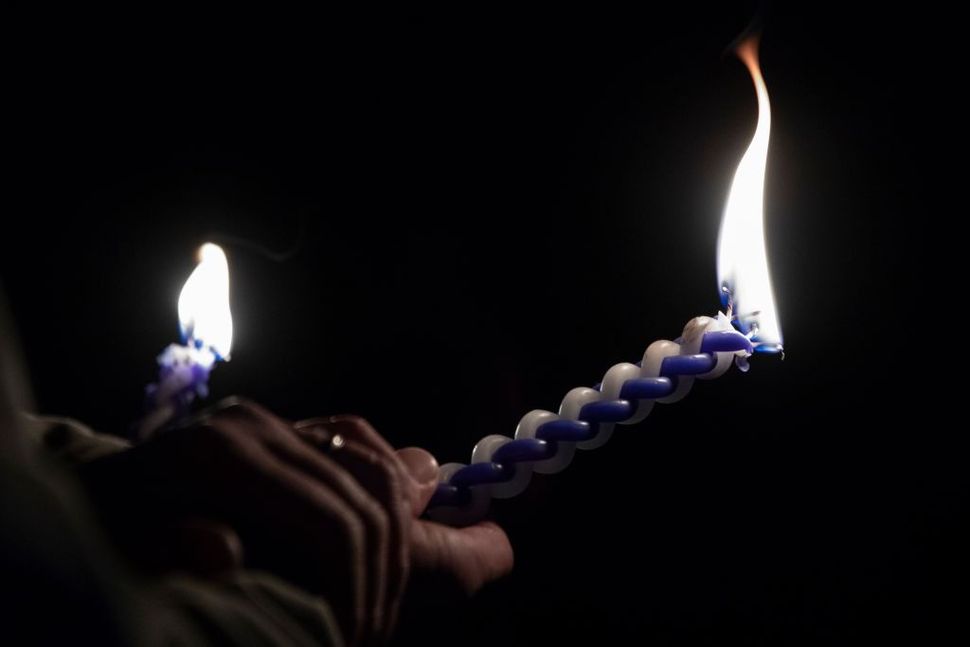 A vigil participant holds a Havdalah candle during a Havdalah vigil for the victims of the Tree of Life Congregation shooting in front of the White House on October 27, 2018 in Washington, DC. According to reports, a gunman opened fire on a synagogue in Pittsburgh, Pennsylvania Saturday morning, killing at least 11 people and wounding several police officers before being taken into custody. Image by Alex Edelman/Getty Images

On Saturday night, what feels like a lifetime yet was only six days ago — after a rainy and windy day of mostly board games and books, my family gathered, as we do each week, to strike a match, light our colorful braided candle, and make Havdalah to mark the end of Shabbat. As we extinguished the flame and illuminated our phones, we were met with the horrific news of the shooting attack on the Tree of Life Synagogue in Pittsburgh, and moved quickly from a state of shock to grief.

As we processed the news with the smoke of the Havdalah candle still dissipating in the air, I thought of the midrash about the first human encounter with fire. Pirke de-Rabbi Eliezer (Chapter 20) explains that on the very first Saturday night of creation, as darkness approached and Adam realized he was without the protection of the Shabbat, he began to fear the snake. His fear was assuaged by the appearance of a column of fire. Fire allows humankind to conquer fear, to conquer the natural dangers of the world; with control of fire, humans begin to rule over nature, rather than be ruled by it. But that same fire, as re-assuring as at times it may be, when left unchecked, also consumes and devours that which is in its path.

Fire too made an appearance in the reading of the Torah portion this past Shabbat morning. As Abraham prepares and sets on his way for the near sacrifice of Isaac, Isaac looks at his father, confused and bewildered, and says, “Father! Here is the fire and the wood; but where is the sheep for the burnt offering?” As we ended Shabbat, and learned of the human sacrifices, sadly my children did not look to me, like Isaac did, with bewilderment and confusion. Tragically, this moment was to be expected, and in many ways, they, and I, were prepared for the sensation and recognition of terror and fear, and the racism and bigotry that fostered it. As a Jew, as an American and as an occasional resident of Israel, we have, unfortunately, gotten used to this.

Having lived in Israel in 1996, during a year of bus bombings, I learned, as a naïve and idealistic young student, how to navigate my weekend bus route to avoid Jerusalem’s #18 line, which was a target of Hamas terror. In 2000, newly married and back to Israel for a Fellowship during the second intifada, I often donned a hockey helmet for protection while driving on roads that were targeted by snipers, and on more than one occasion, hid under the seats of a bus with young mothers, old grandfathers and small children, as we frantically waited out a nearby attack.

What I learned from those experiences, and others like it, was how to respond. I learned what it means to continue living in the face of fear. I observed the ways in which even the busiest and most important people dropped everything they were doing to go and care for others. I watched as communities banded together to mourn death, but also to celebrate life. I saw, firsthand, how commitment to cherished values enables those in suffering to move on, thrive and flourish.

As I returned from my Fellowship year abroad, then as a law student in 2001, pregnant with my first child, and studying in lower Manhattan as the towers came down, I grieved, along with our nation as human sacrifices were engulfed by flames of hate. Upon returning to classes after a week of being unable to access our campus, as we cried, my fellow classmates and I looked toward our professors for guidance and leadership. At the time, all I could think about was how I could possibly be bringing a child into a world such as this. In a seminar room, with our civil liberties text books open in front us, our beloved professor put words to what people were doing – “now is the time to buckle down on the values that are under attack and live a life that is purposeful and value-laden. Protect those who are unprotected, give voice to those who are silent, feed those who are hungry and raise your voice when you see injustices before you.” My daughter, in utero, was listening along with me.

So now when I look at her, together with her three younger siblings, I wonder, what do we do in the face of hate, as we raise kids in a climate and culture of fear, of mandatory school lockdowns, of synagogues and pre-schools that are inaccessible without ID cards and security clearance? What do I say as they leave the house in the morning, phones fully charged in case there is an emergency text message that must be delivered? How do we cope not knowing where the next shooting will take place? Will it be a synagogue? A mosque? A church? A school? A community center? The playground? Or the local café?

We live. Proudly and with our heads held high, while we lift up those who are unable to lift themselves. We band together, care for one another and go on.

A few years ago shortly after relocating my family for an academic Sabbatical in Jerusalem, we were met with the knife intifada, and, along with purchasing new backpacks to fit their Hebrew textbooks, my kids prepared for the school year with mandatory self-defense classes, and kindergarten lockdowns. There was normalcy, too: my daughter – born soon after September 11 – and I played flag football as part of the Women’s American Flag Football League. In the middle of one game, we saw three police cars race by, followed by three ambulances, and heard the sound of helicopters overhead. We quickly pulled out our phones only to confirm our suspicions: there had been yet another attack. There were two people dead. We held one another, banded together as a team, and our coach said, “Now we continue to play, the game must go on.” So I took my daughter’s hand, trying to hold back my tears and protect her from the pain of the world, squeezed it and said, “Play harder.”

As I look at my kids today, and think about the climate of fear to which they have become numb, all I want to do is take each one of them by the hand, squeeze it, look them in the eyes, and once again say – play harder. Dream bigger. Love more fully. Give of yourself in ways you didn’t think possible. Dig deep inside and when you go out into the world take the values that you have absorbed from your communities – your American communities, your Israeli communities, your Jewish communities, your global communities – and lead; lead with love, with learning, with studying, planning and with building. Lead in ways that give hope. When you do, others will follow. Like Abraham, get up early in the morning and go do what it is you think needs to be done.

As we enter Shabbat once again, this time with candles of memorial and of pain burning alongside our candles of tranquility and protection, and we read the Torah portion of Hayyei Sarah, we think not just of lives lost, but of those lived. We grasp and we hold the branches of the tree that have been cut down, pressing them against us, prompting us to work harder and live stronger. Though eleven of its branches will forever be missing, the tree, is a tree of life for those who hold onto it.

Finding Solace In Shabbat, After Pittsburgh