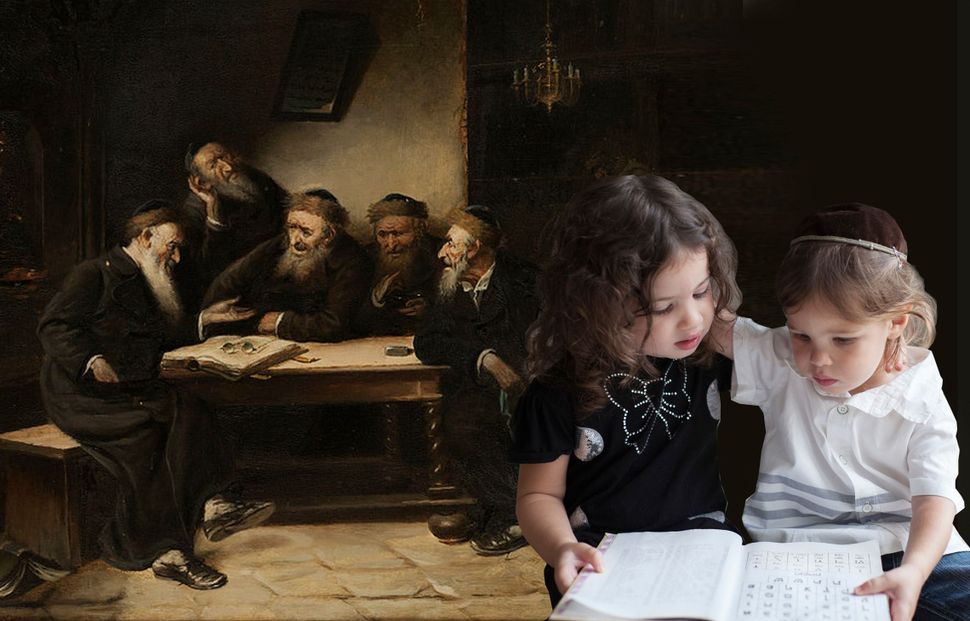 A few weeks ago, I bought tickets to take my kids to what promised to be an exciting performance at a local Jerusalem theater.

“Aggadot L’Yeladim,” the advertisement read – legends for children. The Hebrew word used for legends, Aggadot, is the term used in Talmudic studies to refer to the literary parts of the Talmud—stories, fables, and legends—in contrast to Halacha, the legal material. Somewhat naïvely, I assumed that the performance would be an adaptation of famous Talmudic stories for children – perhaps the story about the righteous gentile who refused to wake his sleeping father, thereby losing out on a lucrative business deal; or the tale of the sage who left home to study Torah for so many years that he failed to recognize his son when he returned; or the one about the man and his wife who jumped into a fiery furnace to avoid embarrassing the pauper to whom they regularly gave charity.

The day of the show arrived, and to my disappointment, the actors performed yet another rendition of Cinderella. My daughters were thrilled—they can never get enough frilly dresses and magic wands—but I could not help thinking it was such a missed opportunity. Here we were in Jerusalem, the global capital of Jewish learning. The show had attracted an exclusively Jewish crowd, as performances in this particular venue always do. Why not expose these children to our people’s vast literary heritage, as opposed to performing the same Grimm’s folk tales that most children already know by heart? Why not re-enact, say, the Talmud’s version of Cinderella – the story of Lichluchit, meaning “filthy one,” as Cinderella was originally known in Hebrew?

Fortunately, though, in recent years, the Talmud’s rich treasure trove of stories has been getting more attention.

Several recent books in both Hebrew and English have explored some of the Talmud’s most engaging, provocative, and outrageous tales. In Israel, popular books by Yehuda Brandes, Ruth Calderon, Admiel Kosman, Anat Shapira-Lavie, and Ruhama Weiss have explored the contemporary relevance of various Talmudic tales, and now Jeffrey Rubenstein has done the same for an American audience.

Rubenstein, a professor of Talmud in the Department of Hebrew and Judaic Studies at NYU, has written several scholarly books on Talmudic stories, but his new book, The Land of Truth: Talmud Tales, Timeless Teachings (JPS) is written for a popular audience not necessarily familiar with the Talmud or its tales.

Rubenstein provide an entry into the rabbinic world and an exploration of its insights and perspectives, enabling readers to “journey back in time to sources of ancient wisdom and then forward again to our own time.” Each chapter offers a literary analysis of a story or a cluster of stories from the Talmud and midrash—stories dating from the first few centuries of the common era in both the land of Israel and Babylonia—and sets them within their Talmudic and historical contexts. Rubenstein then shows how they can shed light on various aspects of human experience, moral character, interpersonal relationships, and the dynamics of political power.

Some of the stories that Rubenstein discusses in his book are well-known, though he finds surprising modern relevance.

The book begins with the oft-taught tale of Honi the Circle Drawer, who is puzzled to see an old man planting a carob tree whose fruits he will surely not live long enough to enjoy. The old man explains that just as his ancestors planted for him, so he plants for his descendants. At that point Honi falls into a deep sleep, and when he wakes seventy years later, he sees the man’s grandson eating the carobs. Honi then returns both to his home and to the study house, but to his dismay, no one recognizes him. Honi, who did not realize that one generation could benefit another, fittingly finds himself unable to establish a connection to the succeeding generations – neither to his descendants nor to his disciples. The story ends with Honi’s tragic declaration that a person must enjoy the fellowship of others, or else he might as well be dead.

Rubenstein infuses this ancient tale with a contemporary resonance. He sees in Honi’s loneliness a paradigm for today’s weakening connections to families and friends. When Honi wakes from his sleep and finds that no one recognizes him, he experiences a loss of dignity that is familiar to many senior citizens who feel they have become unrecognized, and that their lives, talents and contributions are no longer valued.

Honi’s story is also an environmental cautionary tale. The planter of the carob tree is engaging in sustainable agriculture, having internalized a principle familiar to many indigenous cultures – namely that “we do not inherit the Earth from our ancestors; we borrow it from our children,” as per a saying associated with Native American folk wisdom. Finally, Rubenstein situates this Jewish Rip Van Winkle tale in a broader cross-cultural context: The motif of a multi-decade sleeper who reemerges into a changed world features in German, Chinese, Japanese, Dutch, and Arabic fables as well.

It is not just that other cultures have their Honi; we Jews have several Honi’s too. In “Our Sages Today,” published this past year in Israel, Israeli educator Anat Shapira-Lavie noted how the Zionist poet Rachel Bluwstein invoked Honi in her verse to give voice to her loneliness as a new immigrant who never quite succeeded in assimilating into Israeli society: “The somber fate of Honi / Darkened my soul today / ‘A man passed and did not greet him / But continued on his way.’” Shapira-Lavie entitles her chapter on Honi “Falling Out of Time,” which is the title of a drama-in-verse by Israeli novelist David Grossman about a grieving father who sets out to find his dead son, accompanied by a chorus of other bereaved parents who feel that without the fellowship of their beloved children, they too might as well be dead. Rubenstein’s chapter, juxtaposed with other readings of the Honi story, is a reminder of the multivalence of Talmudic narratives.

Other chapters consider less familiar tales, such as the title story about a land in which everyone speaks the truth, until one sage tells a little white lie and is banished. This tale is an occasion for an exploration of the complex relationship between truth and lies, which leads Rubenstein from Kant’s theory of ethics to the Twilight Zone. Indeed, the breadth of literary and cultural references throughout this volume is staggering – Rubenstein moves freely from high to low culture, referencing a contemporary Syrian poet, a professor of linguistics, Gilbert and Sullivan, and Amelia Bedelia – all in a single chapter about the Talmudic tale of a husband and wife whose marriage is strained because of miscommunication.

In other chapters, Rubenstein calls our attention to the gaps in Talmudic narratives and attempts to fill them in by rewriting the tales as fiction, as Ruth Calderon did in A Bride for One Night, her book about Talmudic stories originally published in Hebrew in 2001.

Rubenstein, who has a rabbinical degree from JTS in addition to his academic credentials, is at his best when exploring how these stories can help us make sense of our modern reality – and as such, this book will be an invaluable resource for pulpit rabbis and Jewish educators in search of texts that will inspire and speak to their congregants and students.

The Talmud is often regarded as a dry legal tract that deals with questions largely irrelevant to modern experience: How did the high priest confess his sins on the head of a goat on Yom Kippur? Which parts of a field must be left unharvested? Throughout the 1500 years since the Talmud’s inception, the Talmud’s legal material was the primary focus of traditional study, and Aggadah was not accorded the same status. In traditional printings of the Talmud, a page of Talmud filled with aggadic stories can often be identified by the relatively minimal marginal comments, since historically far less attention was paid to these sources.

And yet as Rubenstein’s book reminds us, Aggadah includes some of the most accessible material in the Talmud, and it has the potential to speak to Jews of all ages and backgrounds and observance levels. The Talmud’s stories address many of our most urgent challenges and dilemmas: What is the proper way to care for an aging parent? Who should be called into account for the often prohibitively high cost of day school education? Rubenstein shows us how we can anchor ourselves in the ancient stories of our ancestors, so as to gain a better sense of direction as we navigate our course through life.

A midrash in the Song of Songs Rabbah says that the Torah was like a pot of boiling water so hot that no one could pick it up, until Solomon came along and developed parables and midrashim that served as handles, so the text could be lifted and carried around.

For many Jews, the Talmud is like a pot of boiling water that they feel they have no way to lift and to carry around. With this book, Rubenstein has given handles to the Talmud, as it were, enabling greater access to a literary heritage that has for too long been neglected except by a learned elite. Talmudic stories are a way for all of us—not just rabbis and scholars and educators—to get a handle on the texts of our tradition, to turn to them as sources of meaning and guidance, and, in so doing, to make them our own.