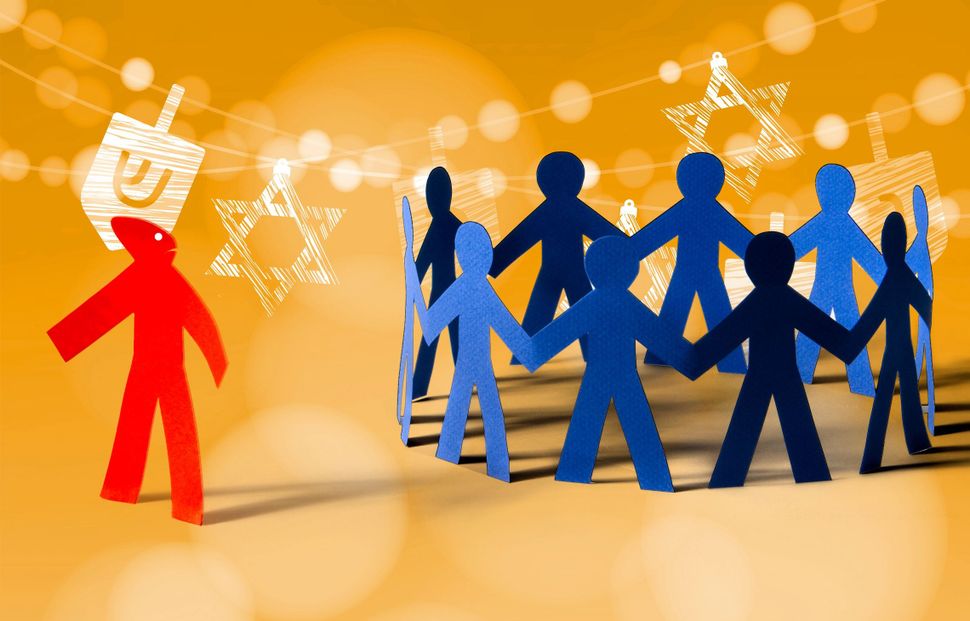 I’ve been left off the Solomons’ Hanukkah party list.

You know the Solomons* – that large, loving, trans-generational family of educated, cultured, politically active writers, lawyers, professors, and psychotherapists. It was one of the great fortunes of my life that I was “adopted” into the family. And for fifty years now, I have been going to their annual Hanukkah party.

As it turned out, I am a “racist”, sexist, homophobic, Islamophobic, unapologetically heteronormative white-privileged male.” Or so I’ve been told, by various Solomons over the last few years.

And now, I am no longer on the guest list.

After all, things have changed over the last few years. I used to be close to Shecky Solomon, who sent out the list this year. We worked together, vacationed together. But recently, we were driving together and disagreeing about something, and he said, “You sound just like Dennis Prager.” I was flattered that he compared me to someone I admire, but I knew that from him, it was an insult.

“Does that make me wrong?” I asked.

Apparently — it does. At that moment, Shecky decided never to talk politics with me again. Nor much of anything else. No more Vegas vacations. No more Sunday night phone sessions doing the New Yorker caption contest.

During the Thanksgiving break of her freshman year, Tiger Solomon and I laughed together at her tales of the inanities of political correctness she had encountered at the New College of Florida. But after four years there, she posted online that everyone was welcome in her apartment except for “white cis men.” That left me out.

The last time I visited Hubie Solomon, I had just seen “Spider-man: Homecoming” and told her about the scene where a high-school girl tells her teacher she won’t go into the Washington Monument because it was “built by slaves.” I wanted to explain that what I objected to was that the movie— like most cultural forces in our society shaping kids today — presented only one side of the issue. Her teacher could have said something like, “It is possible that slave labor was used in the construction, but the monument honors a man who played a key role in establishing a country that has produced more prosperity and freedom for more people than any other in history.”

But I never got that far. Instead, I was told: “Rathe, your insistence on talking about these things is creating a barrier between us.” That was the last time we ever spoke about politics – or much of anything else.

It’s not my insistence on talking about “these things” that’s creating the barriers — it’s our inability to discuss our disagreements. I hear a lot of talk about equality, diversity, open borders, abolishing ICE and the electoral college and maybe the Constitution, too; increasing taxes, increasing the power of the central government; free healthcare, free education, free housing and maybe even guaranteed minimum income. And above all — the prohibition of criticizing or offending any individual who belongs to one of our “most vulnerable groups.”

I know that the Solomons would still be hanging out with me if I didn’t challenge their holy doctrines. They became “woke”— I became “the other.” Thankfully not all of the Solomons voted for my excommunication. My one last hope is young Skybar Solomon, whom I’ve mentored over the years. Now, after a graduate degree from Bryn Mawr — another bastion of intellectual diversity and free-thought — she dismisses America and its “systemic racism.” Now, she refuses to eat in a Mexican restaurant when she finds out it is owned by a white man. Cultural appropriation, doncha know. Now, she’s educated. “Sky, don’t you think America is a great country?”

“Sky,” I try again, a whimper of desperation in my voice, “don’t you think this is a great country?”

More silence. Then, finally: “Maybe for some people.”

And I don’t mean get her to agree with my political opinions. I mean get her to see that issues surrounding race, gender, immigration, socialism v. capitalism and every other controversy of our time – even abortion – have legitimate arguments on both sides. I want her to listen and address the substance of the arguments and not defenestrate those who disagree.

Is there less malignant tribalism on the right? Of course not. People are people. But in the circles I travel — academia, the media, big tech, the Solomons — I get to witness an increasingly intolerant groupthink replacing centrist, independent thought.

It’s one thing to see it on TV as some talking head goes more partisan, more doctrinaire. But it’s not theoretical when it’s happening to someone you love. It’s like watching a family member join a cult. Do you hear me, Sky?

Meanwhile, even though I’m off the list, I will still go to the Solomons’ Hanukkah party. I just hope they haven’t kicked me out of the Secret Santa.

Rathe Miller is a writer based in Philadelphia, PA, and is a long-term contributor to the Philadelphia Inquirer.

(Names have been changed to protect subjects’ anonymity.)