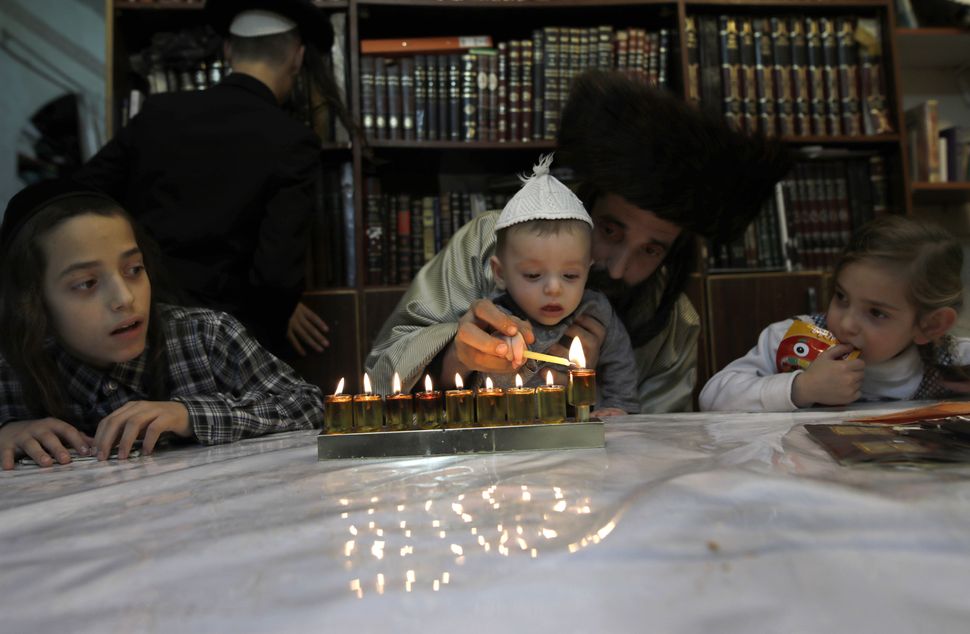 In a recent New York Times op-ed, “The Hypocrisy of Hanukkah,” novelist Michael David Lukas described Hanukkah as being a holiday for hypocrites. According to his assessment, most Jews celebrating this wintertime holiday would probably have been hated by the Maccabees, the Hanukkah heroes, and that the holiday only gained significance in recent decades due to its proximity to Christmas. He claims that because the violent uprising of Judah Maccabee and his followers was aimed at preventing the assimilation of Jews in the modern culture of the time, it is hypocritical for secular Jews today to ignore that element of Hanukkah, and that doing so means celebrating a holiday that is really all about violent fundamentalists.

He concludes his piece by saying that he will nevertheless embrace the contradictions and still celebrate Chanukah with his young daughter, but his focus will instead be on the “Hellenized” Jews of the story, rather than the Maccabees.

Aside for the questionable accuracy of his assertion of whether or not Hanukkah was celebrated with much fanfare over the last 2,000 years (which, according to the Talmud, Maimonides, the Code of Jewish Law, and many other works, it was) — he is correct that Hanukkah is a holiday for hypocrites.

The Maccabees were indeed “fundamentalists” in the sense that they believed Judaism can only survive when it is observed as dictated by our ancient traditions. And there is no denying that their revolt against the Syrian-Greek (Seleucid) Empire was in response to the occupiers’ intention to Hellenize Jewish culture and ‘bring it into the modern age.’ In fact, the Al HaNissim prayer recited during Chanukah makes reference to that being a focus of the holiday.

The truth is that this hypocrisy is not limited to Chanukah. In fact, a rabbi’s job should be to inspire as many Jews as possible — even if it involves them being hypocrites. As the Lubavitcher Rebbe taught his followers, Chabad emissaries around the world, that any mitzvah done by a Jew is valuable, regardless of those that he doesn’t do, and regardless of his or her professed beliefs—be it atheism, humanism, or even Hellenism. Whether or not you believe in the Maccabean effort, even if you do identify with Hellenism — come light the menorah anyways.

I’ve heard more than once, “Rabbi, I can’t come to shul on Shabbat, because I do such-and-such.” Or, “I don’t feel comfortable laying tefillin when I don’t believe in it.” And then there is my all time favorite: “You shouldn’t be teaching Torah to people who aren’t prepared to observe all the laws written in it!”

On the surface, they are right.

Conventional wisdom dictates that you shouldn’t be involved in something you aren’t entirely sold on. It makes no logical sense to go through the motions of an activity when you see no value in it. A student shouldn’t be studying for a career he or she has no interest in and a professional should not be advising clients without complete conviction in the imparted advice. If you believe in something, you get involved with it and promote it. And if you don’t believe in it, you keep away and focus on things that do align with your ideals.

However, Judaism is anything but conventional. There is little about the way we Jews live our lives that makes sense. Of the 613 mitzvahs in the Torah, only a handful have logical explanations, and even the ones that do are still observed because “God said so” rather than because of the rationale. Whether it’s keeping kosher or fasting on Yom Kippur, we don’t do those because of any convenient logic — and we are enjoined to observe them, even if we believe otherwise.

And this same lack of convention extends beyond what we do, to who we are. The existence of the Jewish people today is pretty illogical. It makes no sense that after 2,000 years of being scattered around the world—of persecutions in the Middle East and Europe, with pogroms, libels and terror attacks threatening our existence time and again—that there is still a people called the Jews. Conventional wisdom had us pegged as being extinct long ago. Yet here we are. And it makes no sense.

So this is where the hypocrisy — of observing a holiday that may celebrate something you oppose — stems from. And it is also where I disagree with Mr. Lukas. Yes, perhaps the Maccabees would not approve of his secular lifestyle or his beliefs, but that doesn’t mean they would have discounted him as a fellow Jew.

The way traditional Judaism views the Maccabees, and ourselves as the torch-bearers of their legacy — there is no room for hate, only acceptance, tolerance and teaching. No matter what your observance level is: Come light the menorah tonight.

Rabbi Eliezer Zalmanov is co-director, along with his wife Chanie, of Chabad of Northwest Indiana. They are proud parents of seven children, ages 1 through 15. He is also a member of Chabad.org’s Ask the Rabbi and social media teams.