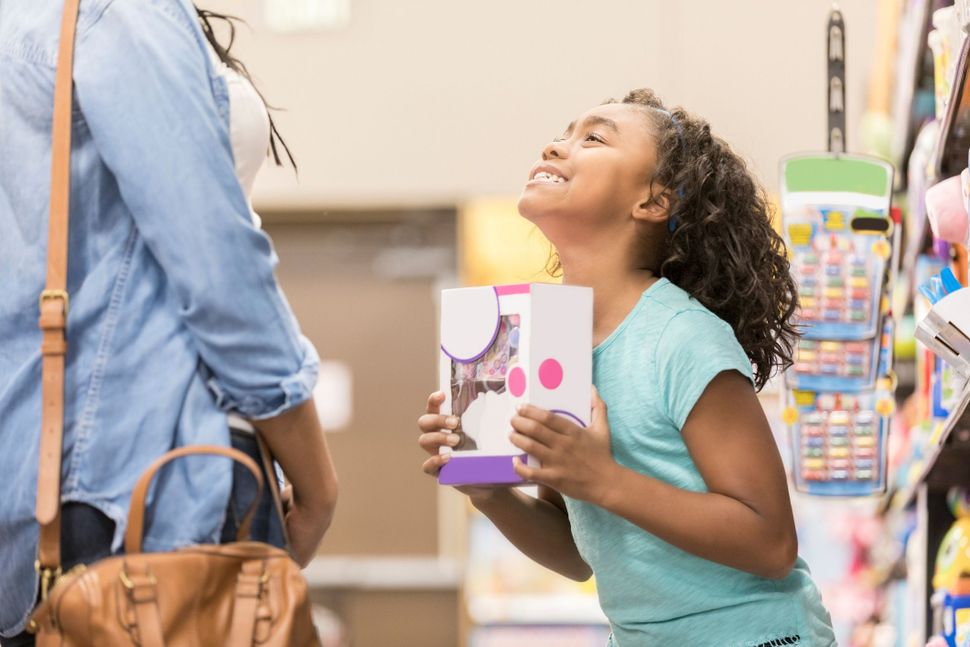 Most parents want to give their children the world.

But it’s sometimes difficult to know when to draw the line between giving our kids the world and ensuring they don’t grow up spoiled, having everything handed to them. This line becomes especially hard to navigate around Hanukkah, as our children are bombarded with the overt consumerism that dominates American Decembers.

As an Orthodox kid growing up with every advantage of a solidly middle-class upbringing, I had everything I needed and even some things I just purely wanted.

Yet I still felt marginalized being surrounded by children who seemed to get things simply by asking for them, whereas I always had to make an earnest case for the item in question or find a way to purchase it myself. If I wanted roller-skates, I first had to prove to my parents, with repeat family meetings and increasingly desperate pleas explaining why going without roller-skates would put me at a major social disadvantage. If I wanted to partake in any of the things my parents deemed extraneous, like going to the movies with my friends or buying a snack from the concession stand on class trips, I had to save up for these things, painstakingly, with dollars earned from sporadic babysitting jobs. Every other kid had a subscription to AOL Instant Messenger, but why should my parents pay for a second-rate form of communication when I could literally walk across the street to talk to my best friend? I don’t know whether my friends had more indulgent parents or parents with easier cash flow, but this disparity, in my view, deeply rankled me.

I knew then, even in my childish outrage, that this didn’t amount to actual hardship by any stretch of the imagination. I “checked my privilege” long before that phrase entered the realm of political correctness.

But, in the frustrated confines of a childhood spent arguing and working for things other asked seemed to get simply by asking, I promised that, when it came to my own kids, I’d make childhood as cushy as possible for them. They’d have time to learn the value of a dollar later, and they’d enjoy childhood without having to stress about whether or not they’d get the things that seemed important for social currency.

Of course, having now grown up and become an actual parent, my perspective on the world has shifted. I recognize that my “struggles,” minor as they were, instilled in me a sense of industriousness and independence. It is these things, I realize now, that I actually want to give my children, rather than handing them everything on a silver platter like I once promised myself I would.

And yet, I struggle. I feel a vague but constant sense of guilt: I’m divorced, so my kids are already dealing with hardships that many other kids don’t have to face. And aside from the divorce, we live in a community populated by many families more well-off than ours, and so my household’s fewer means are even more pronounced. And lastly, I just purely want them to have more than I did, even if what I had was more than enough. Whether you grew up in the home of a Rockefeller or on a cash-strapped hippie commune, all parents want their children to have better lives than they did.

But what does “better” mean, anyways?

For most of us, “better” translates into wanting our kids to work half as hard as we did for double the things and experiences we enjoyed. We want not to think twice when it comes to saying yes to signing up our kids for another high-priced extracurricular activity. We want our kids to enjoy sleep-away camp or travel, instead of working summer jobs to help pay for extras. We want, sometimes, to stop in the mall when our kid tugs our hand as they stare at something shiny in wide-eyed childlike wonderment, and just answer yes when they beg us to buy it for them.

Sometimes finding the balance is a fairly straightforward process – for instance, my son is not getting an iPhone X before I upgrade my iPhone 6. I prioritize experiences like camp and sports over tangible things. And I don’t even mind going without my usual indulgences for a while if it means I can buy my son an Xbox or my daughter that American Girl doll she keeps circling in the catalogue.

But I struggle with knowing when to make it easy for them, and when to make it harder. Should my son get a phone at all, even if his three best friends have one? Should my daughter even get that American Girl doll, because I think it’s ridiculous to spend upwards of $100 on a doll in which she will lose interest as quickly as a $20 one from Amazing Savings? Where is the perfect line at which I will grant my children some pure indulgences and fluency in a status-seeking culture but also prevent feeding the beast that demands more and more?

It’s ironic that Hanukkah, a Jewish holiday ostensibly about resistance to assimilation, is often seen by the uneducated masses as a faint echo of Christmas. We can debate at length whether Christmas is to blame for the radical commercialization of Hanukkah. But there’s no doubt that to many young children, Hanukkah is all about presents, and to many exasperated parents, Hanukkah represents a fine balance on the line of wanting to give your kids the world – and also wanting your kids to grow up as grateful, content people, and not entitled jerks.

So I do the best I can. I get up on my soapbox probably a little too often to remind my kids that, even in this country saturated with wealth and entitlement, there are so many children who don’t have a fraction of what our family does. I try and find opportunities to involve them in giving back, like donating toys to Chanukah charity drives and finding volunteer opportunities on Thanksgiving and other national days of service. But these things things tend to pale in the face of a constant stream of glossy advertising and the understandable desire to keep up with one’s peers. It sometimes feels like an uphill battle, one I feel tired of fighting when my kids ask why they don’t get eight nights of presents like some of their friends (“Eight?” I squawk. “I was lucky to get presents on ONE night!”).

Despite my inner turmoil, this Chanukah, I also remind myself of the gift that is parenting. I might not have foreseen the intricacies involved with raising children – but I feel fortunate to spend so many hours agonizing over how to mold people who are appreciative, compassionate, and ultimately unspoiled in a world that tries to convince you that you won’t be happy without a whole lot of shiny things. I know that helping my kids internalize this will be the greatest gift I can give them.

Tova Stulman is a communications professional and freelance writer with experience in drafting creative and development content for a variety of clients. She has contributed to the New York Times, Washington Post, Tablet Magazine and the Forward. She currently works as a writer for a major non-profit and lives in New Jersey with her family.