Why Are Canadian Reform Jews So…Conservative? 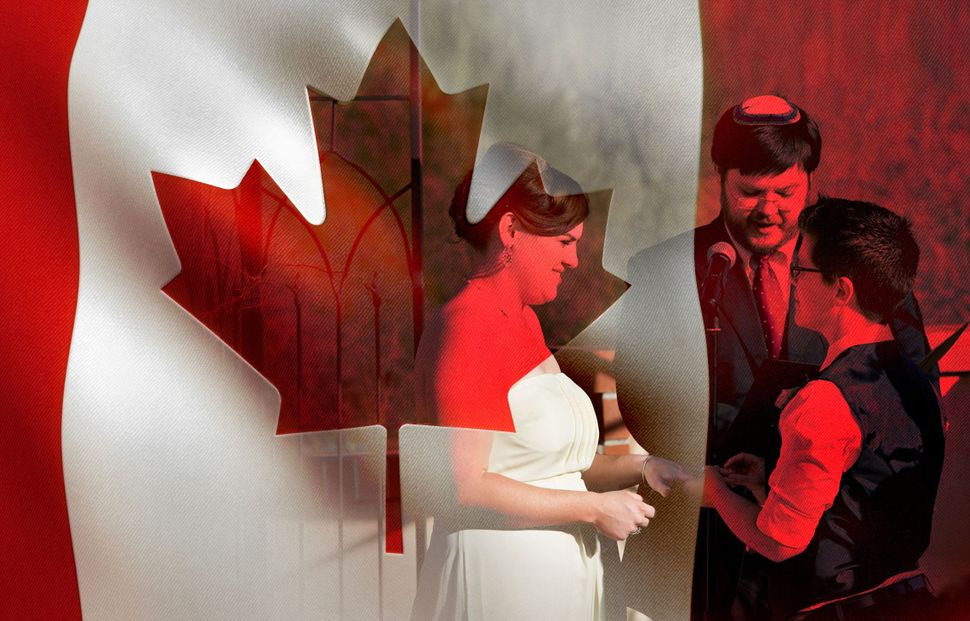 I’m a Reform Jew in Canada, and I’ve been watching the profound changes towards inclusion that American Reform Jewish leadership has made in the last four years with tears, relief and – jealousy. Since leaving the U.S. for Canada 15 years ago, my Judaism is a bit worse for wear.

Because Canada is such a progressive, inclusive country, I did not anticipate that Canadian Jewry would not reflect that larger impulse. While the Reform movement in the U.S. is the most populous — in Canada, the Conservative movement is the strongest, pulling Reform Jews to tradition.

The conservatism of Canadian Reform Judaism is even more peculiar because these rabbis are not ordained in Canada — they are ordained in the States and then either move or return to Canada. Yet as followers rather than originators, Canadian Reform Jews seem to take pride in being more conservative than their U.S. counterparts, as though they take the rules more seriously than those who wrote them.

This willful tradition is not for example, preserving a different way of davening. It is about being on the wrong side of history on matters of inclusion. Canadian Reform Jewish leadership is far too often pulled by change — rather than leading it.

For example, women rabbis only came to Canada once U.S. predecessors paved the way. This is especially odd because women do better in electoral politics in Canada than in the U.S: Canada has had a woman head of state, unlike the United States

Or consider same-sex marriage. Canadian Reform Jews foot-dragged behind their U.S. brethren in relation to rabbis performing gay marriages. Again, this is out of step with the law in the two countries; Canada legalized gay marriage in 2005, a front-runner in human rights, while the U.S. followed ten years later. Yet in the case of Reform Judaism, gay marriage was much more a part of congregational life in the States after the Central Conference of American Rabbis endorsed it in 1999. In 2012, John Moscowitz, then senior rabbi at Holy Blossom, the largest reform congregation in Canada, confessed in a Globe & Mail editorial to having changed his mind, finally, on performing gay marriages; he could no longer ignore the gay people in his community.

With patrilineal descent, too, Canadian Reform leadership is sorely behind. For millennia, Jewish identity has rested on matrilineal descent. If your mother was Jewish you were considered Jewish, but if your father was your Jewish antecedent, you were out of luck and had to undergo conversion. At the turn of the century, my Orthodox Jewish grandmother had an inadvisable affair at Columbia University with a non-Jewish Scottish American. My father Samuel was the result. Her parents abandoned her, but my father was still included among the Jewish boys at his synagogue in Philadelphia. If my father however decided to marry a non-Jewish woman, I would have been cast out of the faith, required to undergo formal conversion. Under these circumstances, most children of Jewish fathers choose a life apart.

This narrow-mindedness about ‘who is a Jew’ spills into wider issues with inclusion here. While Reform synagogues in the U.S. have been allowing non-Jewish members to stand on the bimah and recite prayers in preparation for reading the Torah for many years now, in Canada this is far from the case. At a meeting in my Reform shul in Toronto in preparation for the next group of bar and bat mitzvahs, the rabbi explained that non-Jewish parents were not allowed on the Bimah. My heart sank — though my son has two certified Jewish parents, in this moment of celebration and accomplishment, I didn’t want my son to direct his attention to divisiveness and exclusion of his peers’ parents. This is how it’s done here, I was told.

Thanks to Facebook, I have seen over the ‘red curtain’ that separates me from rabbis and congregations in the U.S. where Judaism is practiced quite differently. Watching the sermons of my friends’ rabbis, from New York’s B’nai Jeshurun, Central Synagogue, Congregation Beth Eloheim, Boston’s Temple Shalom, IKAR in Los Angeles — toppled me. They were politically imaginative, caring, drawing in, not pushing away. I found myself watching telecasts of U.S. synagogues like normal people binge watch Netflix, my teeth aching with the beauty of intention I found. I spied on congregants. Did they look as fortified as I imagined I would feel sitting among them in the pews? They did.

While a spiritual renaissance has been going on across the U.S in the last several years, most Reform Jews in Canada are oblivious. Curious as to why my synagogue was not similarly awash with change, I approached my rabbi. This is how it’s done here, I was told, again. I began to feel stuck in a Fiddler on the Roof meme. Congregants in Canadian synagogues are not asked if they would like to join their U.S. peers in these new approaches to Jewish continuity and retention. Is the central task of the Canadian Council for Reform Judaism buffering Canadian congregants from decisions made by the Central Conference of American Rabbis? I hope not.

People tell me to leave Reform Jewry for a Reconstructionist synagogue that doesn’t hew to exclusion. But this is my history of congregational life and summer camp. This is the community I identify with. My kids attend Camp George, the URJ camp of Ontario, as I attended Swig in California. My friends’ kids attend Camp Eisner, Camp Harlam. We are what Reform Jewish continuity looks like. I can’t easily leave it behind.

I have been and remain a Reform Jew because this movement (in the States) takes inconvenience very seriously. It was inconvenient for women to love Torah, inconvenient for men to fall in love with one another, inconvenient for people of different faiths to make a life together. I want a Reform Judaism in Canada that does not pride itself on turning a deaf ear to inconvenient love, to changing conceptions of human dignity, to basic understandings of equality and togetherness.

Can we get Reform Judaism in Canada on the right side of history? For my kids’ sake, I hope so.

Judith Taylor is an Associate Professor of Sociology at the University of Toronto.

Why Are Canadian Reform Jews So…Conservative?