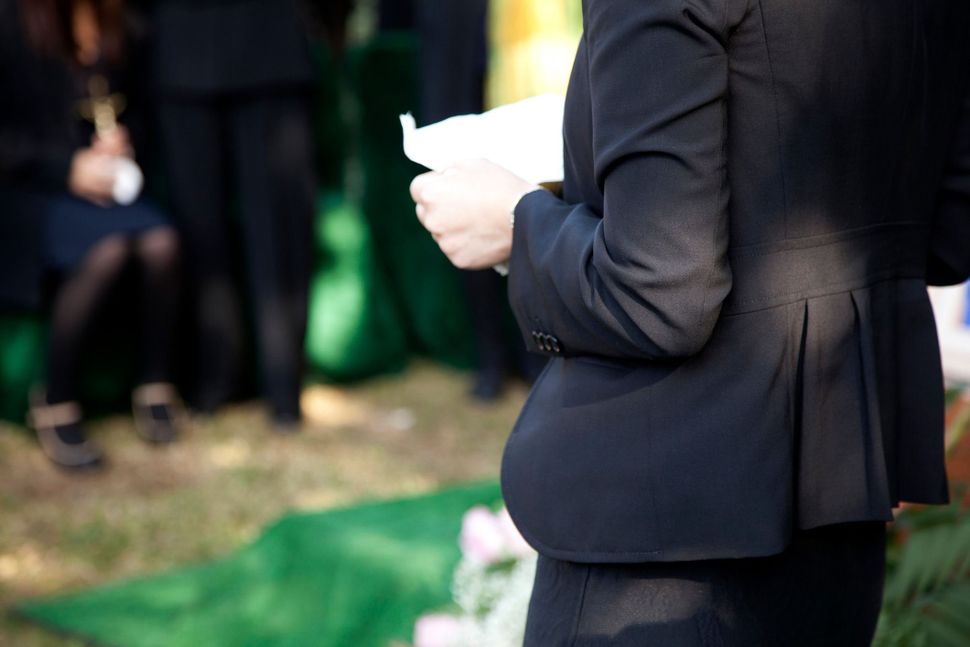 Death is often the elephant in the room, but luckily, Judaism gives us many guidelines for how to manage it when it happens, whether it’s been coming a long time, or surprises those closest out of the blue.

Following those rules and keeping to Jewish law and practice can bring many people comfort in the most difficult of times. While there will always be people who look to find the ‘chumras’, the stringencies which exceed the obligations. If they work for you, and make a painful time easier, then stop reading here, but don’t tell me that Judaism insists on these things.

Visiting a mourner, or helping to bury someone by attending a funeral is widely regarded as one of the most important mitzvot you can do. Yet nowhere does the Torah describe what you should be wearing while you do it.

According to Jewish law, a body must be buried as quickly as possible. In Israel, this can be a matter of hours; while in the US and the UK, it might be a day or possibly two if there are family members coming from abroad. It’s common to leave work in the middle of the day to attend a sudden funeral, or to have very little notice. If you’re not in what society calls ‘the right clothes’ for the occasion, do it anyway.

I’m not talking about the laws of tzniut (modesty) here, although if those are the clothes you would be wearing anyway, I can’t see any reason why it’s more ‘immodest’ to continue to do so at a cemetery. I’ve seen people decrying wearing denim, ‘distressed’ clothing, or even simple T-shirts when they’re visiting the dead, under the banner of ‘respect’. Trust me, the dead aren’t standing on ceremony, and whatever you’re wearing — you’re overdressed by comparison.

Whenever I visit my father in the cemetery, I ask my kids if they want to come with me. I’m going for a walk to think about Zeida, I might say. Or, this is a special place to think about the people who died in the past. I’m not going to pretend it’s easy to talk to kids about death, and mine are still little ones, but I don’t want their first memories of it to be shrouded in mystery, or a cemetery to seem like a frightening or secret place.

If you believe that dead bodies can’t hurt us, then why would you shy away from taking your kids to a place with so much opportunity to learn about those you loved? Superstition isn’t something I put any weight on in any other area of my life, so I’m not starting here.

When it comes to a shiva house, there is a law that some mourners keep, not to hold young children. As long as you are smart enough to make it a short trip, and leave if and when they get restless, there’s no reason to avoid taking children altogether. Some of my most distracting and lovely visits when I sat shiva were from people who brought their kids along, whether I knew them or not. And for the kids, it’s a much gentler entry point to mourning than when it’s their own loved one you’re doing the grieving for.

3. The Right Thing to Say

“I didn’t want to say the wrong thing.”

I once heard a friend tell a story about a shiva they visited, where someone moved over to sit by the wife of the deceased. This woman had been married 40 years, and her husband had died unexpectedly. This visitor put a gentle hand on her arm, leaned her head in close, and with a sympathetic nod said, “I know exactly what you’re going through… we recently had to put down our cat.” Trust me, whatever you say can’t be as bad as that.

Sometimes the mourner will take the lead, with photos of their loved one out on the coffee table, or a clear effort on their part to lead the conversation away from it altogether. Don’t give them the extra work of trying to fill silences. Truthfully, there are no rules for what you talk about, and there’s nothing which is off-limits. Seen a great movie that week? Give a play by play. Kid learned a new trick that week? Brag your heart out. Work, sports, idle gossip, whatever takes your fancy.

The difference between sad and somber can be hard to grasp, but death doesn’t need to be the latter. At my own shiva house, I was just 19, and my friends came home from being camp counselors to join me for the funeral. When we arrived back at my house, we had about twenty minutes before other people came back for mincha. They were the kind of friends you can only really make when you’re a teenager; so close that it felt like we shared a soul at times. My own was filled with grief, and I remember sitting in my front room, shaking with laughter at a story that one of them was telling. There were five or six of us maybe, and the emotions of the day were overwhelming, leading to hysterical giggles. I could hardly stay seated on my chair- six inches off the ground. It was exactly what I needed.

I suddenly noticed a man standing in the doorway, I didn’t recognize him. He was tall, dressed in full black suit and hat, despite it being August. He looked from my laughing face to my friends, and we fell silent. He gave an almighty ‘tsk’ and immediately turned and left. I don’t remember him coming back. Clearly, he felt we were being disrespectful. A moment later, after a stunned silence, we were laughing even louder than before.

Because that’s the thing about respect. It’s really a made-up word with no absolute meaning whatsoever, and it changes all the time. In a mosque you take your shoes off before you pray, while in a synagogue you don’t. In some parts of India and China, it’s respectful to belch after a meal, while in the Philippines it’s rude to use your index finger to point. The list is endless.

Judaism has no such list of respectful behaviors to adhere to when you’re fulfilling the mitzvah of Levayat Hamet (accompanying the dead) or Menachem Avel (consoling the mourners). That’s what’s so amazing about it: The Torah understands that everyone mourns differently. Some grieve with laughter, and some with tears. Some feel the most comfortable wearing denim, while others might need a fancier armor to make it through the day. Some bring their kids, and others call the sitter. Trust me, the mitzvot are the same either way, and no amount of societal judgement can change that.