American Jews Are Getting Rituals Like Mikveh All Wrong 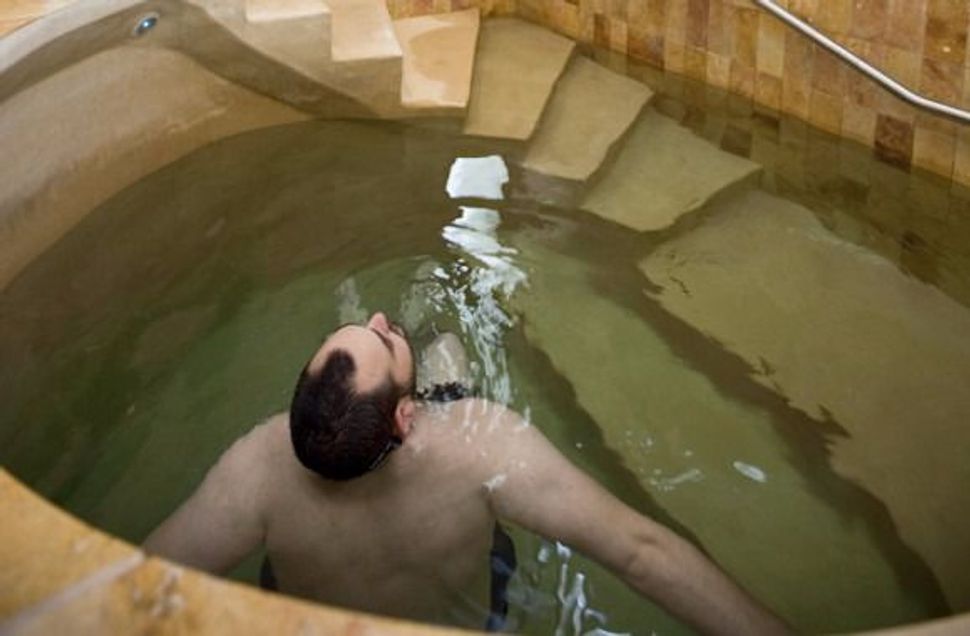 A man using the mikvah at Mayyim Hayyim, a community ritual bath in the Boston suburbs. Image by Photo credit: Mayyim Hayyim

In our community, there is a Marine Corps captain currently on yet another deployment to Afghanistan. He serves our country as both a soldier, and a medic and a firefighter. Every day of his deployment While he’s deployed, he sees the devastating effects of war on children, women and the elderly. And every time he comes home, whether for a short visit or for an extended stay, he comes to immerse in our mikveh. The war, it seems, has had an effect on him, too. When asked about his mikveh practice, this Marine said, “When you put a rock with rough edges into a moving body of water, over time the water will smooth it. My life is filled with moving pieces. I use mikveh as a starting point for each major event that brings with it a certain level of fear. The mikveh grounds me. Sometimes it feels like the only thing I know how to do. The one thing I know how to prepare for.”

In a recent column, a different community member described a spiritual void that many veterans face and wrote about the lack of rituals to enact a meaningful transition from military to civilian life. He suggested that soldiers coming back from war need a way to symbolically shed the terrors of war and to rejoin humanity. He mentioned that ancient cultures had rituals that could communally absorb an individual’s pain.

In my work as director of a progressive and pluralist mikveh, a Jewish ritual bath, I see one of these ancient rituals every day. Tevila, the actual ritual that is performed in the mikveh, is a traditional Jewish practice of full body immersion in water. In a nutshell, it entails immersing three times, which together symbolize the past, the present and the future. These three immersions are a powerful way of marking transitions. One takes time to look back and consider one’s journey so far, to feel grounded and present in the current moment, and to set an intention moving forward.

I have a spiritual practice of immersing once a month and through my work, I love helping people find their own paths toward a mikveh practice of their own. Over 450 people a year come to immerse in this one sacred space I know so well. When I’m immersed in the waters of the mikveh, I feel connected to the Source of Life, to my ancestors, and to my body.

There are many misconceptions about mikveh, the foremost being that it is a purity ritual. The only thing that is purified at the mikveh is the rain water itself, through a simple filtration system. Applying the concept of purity or impurity to our bodies may sound very biblical, but I actually think that it is rather Victorian. Our bodies can be different sizes, shapes, genders and shades, our bodies can be healthy or ill or disabled, and our bodies can narrate parts of the story of who we are on the inside. But pure and impure are external categories that do not resonate with me or with any mikveh users who I know.

When the Adas Israel Community Mikvah was built in 1989, the non-Orthodox rabbis of the DC area finally had a welcoming, if utilitarian, place in which to also perform their conversions. Thirty years and thousands of conversions later, this mikveh has become a place where people now immerse to mark all kinds of life transitions. Becoming bar or bat mitzvah, recovering from an illness or an addiction or an attack, graduating, retiring, finishing a time of mourning, moving to a new city – these are just some of many moments that are marked here, along with the traditional uses such as preparing spiritually for Shabbat or holidays or immersing before one’s wedding. We have just completed a major renovation that now makes our mikveh also accessible for people in wheelchairs through a reconfigured shower area and an aquatic lift. This renovation now makes it possible for everyone to access this ritual safely.

When I became the keeper of this mikveh twelve years ago, the first phone call I received was from a woman who said she had just lost her son and her father in the same car accident. She said she was overwhelmed with grief and she needed to come to the mikveh to wash it off of her. I have spent the last twelve years unpacking everything that was said, and unsaid, in that phone call. I tell her story often, because it is so powerful and raw. Recently, I reached out to her to see if she would like to tell it herself. When we celebrate the reopening of our newly renovated space at Mayim b’Sasson: A Joyful Mikvah Rededication on January 30th, she and five other mikveh users will tell their stories.

Other stories are about an elderly woman who immersed to relieve herself of the guilt of having converted to Catholicism while surviving WWII in a convent in France, a young couple who decided to include the mitzvah of monthly immersion in their recent marriage, and the Marine who immerses as a homecoming ritual. Everyone is welcome to this event.

Rituals like mikveh immersion are placeholders for words or emotions that we don’t know how to express otherwise. I believe that embodied rituals are the most powerful ones because when we do something with our bodies (as opposed to just speaking words or engaging intellectually) we access a deeper wisdom. Words come out of our mouths but actions emanate from our souls.

Rituals may not always “work” the way they’re “supposed” to. In other words, they aren’t magic spells or incantations. Instead, they are intentions, remembrances, outgoing calls to another time and place, or shouts into the chaos saying, “Here I am, trying to connect” or “Remember us! We are still here, chanting these same words and performing this same service at this same time every year” or “Please guide me through this very rough time.” Rituals can be totally personal and individual — or they can be communal.

It’s not only our fighting men and women who need symbolic actions to realign their bodies and their psyches. Everyone faces transitions and we know that change is the only constant. Our journeys need not be mythic to be heroic. We all need rituals.

The writer is Mikvah Director at Adas Israel Congregation, a Conservative movement synagogue in Washington.

American Jews Are Getting Rituals Like Mikveh All Wrong