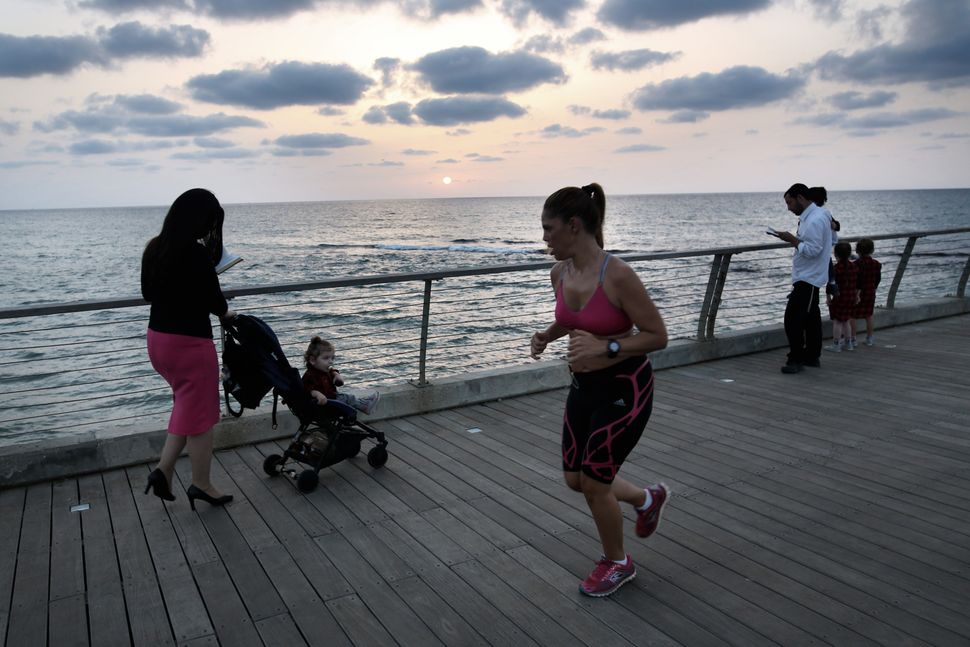 A woman jogs past Orthodox Jews praying in front of the Mediterranean Sea on October 9, 2016 in the Israeli city of of Tel Aviv, during the ‘Tashlich’ ritual. Image by Getty Images

I put my pants on one leg at a time, just like everyone else.

Throughout my modern Orthodox high school experience, the rabbis and teachers taught the laws of “tzniut” as guidelines for modesty, often defined as “self-respect” and “dignity.”

While on one occasion, a Talmud teacher describing how tzniut should impact every aspect of our lives as we try not to draw unnecessary attention to ourselves, most often the lessons on tzniut ended with the conclusions that Jewish women must dress in accordance with halakha so as not to a) distract the boys in our class b) make the rabbis uncomfortable and c) prevent others from seeing our “inner beauty.”

After years of having this drilled into me — the simple, everyday action of putting on pants became almost an act of scandalous rebellion. Having always worn pants and never seriously considered stopping for any reason — be it halakhic, social, or otherwise — the stigma surrounding my dress struck me as odd and unfair, while still ingraining a sense of shame within me.

These messages repeated themselves constantly, both from teachers as well as other members of my community. A dress code infraction often led to a mandated wardrobe change followed by a lecture on the value of dressing modestly. During a school-wide retreat, a fellow female student and I wearing skirts above the knee were told that not only were we making the rabbis uncomfortable but that we were embarrassing ourselves and our families by dressing this way. Community members often made comments to my mother and me whenever I wore pants in public.

Over time, the message began to sink in deeply. The endless stream of comments nurtured my seed of self-consciousness until I began to think negatively of myself, of my own mode of dress.

All I had done was merely choose to dress outside the bounds of halacha — yet I began think of myself as attention-seeking. Promiscuous even.

The Jewish laws of dress do no harm when seen as just that — halachot which one can or cannot choose to follow, depending on one’s desired level of religious observance.

The problem begins when we conflate halachic tzniut with the concept of self-respect. Young women in the modern Orthodox community are inundated with the idea that clothing outside the guidelines of halacha is considered undignified.To criticize a religious woman for being immodest is not only an attack on her religious observance—it is an attack on a woman’s character altogether.

Society, both religious and not, values refined dress for its sense of respectability and professionalism — but let us not delude ourselves to thinking that these characteristics are synonymous with halachic concepts of tzniut.

After all, female public figures such as Michelle Obama, Angela Merkel, and Sheryl Sandberg wear pants, sleeveless dresses, skirts above the knee, and tops with necklines below the collarbone while holding public, respected positions in society, politics, and business. Most consider their dress modest and respectable, even though they do not meet modern Orthodox halachic standards.

Defining a woman’s non-halachic way of dress as immodest and distracting, or discomforting for others, creates a deep self-consciousness within the individual regarding both how they dress and how the male gaze sees them.

By blurring the lines between halachic tzniut and its ideal of modesty, the modern Orthodox Jewish community sends a message to young women that hurts both those who choose and choose not to dress in accordance with halacha. Women who choose not to dress halachically can feel shamed for their mode of dress, developing insecurities similar to those seen in the effects of slut-shaming— while women who choose to dress halachically may learn to label those who do not as immodest, spreading that label to their friends, family, and community, thus perpetuating the stigma.

Modern Orthodox halacha regarding tzniut will be what it will be.

But how Jewish educators choose to relay these halachot has an immense impact on the self-consciousness and self-confidence of the young women exposed to these messages.

It’s time we consider the lasting and damaging effects of equating religious observance with a woman’s self-respect. In time, perhaps young women will be able to put on their pants, heads held high, without questioning their self-respect—just like everyone else.