This Jewish Feminist Artist Was Poisoned — By Her Own Artwork 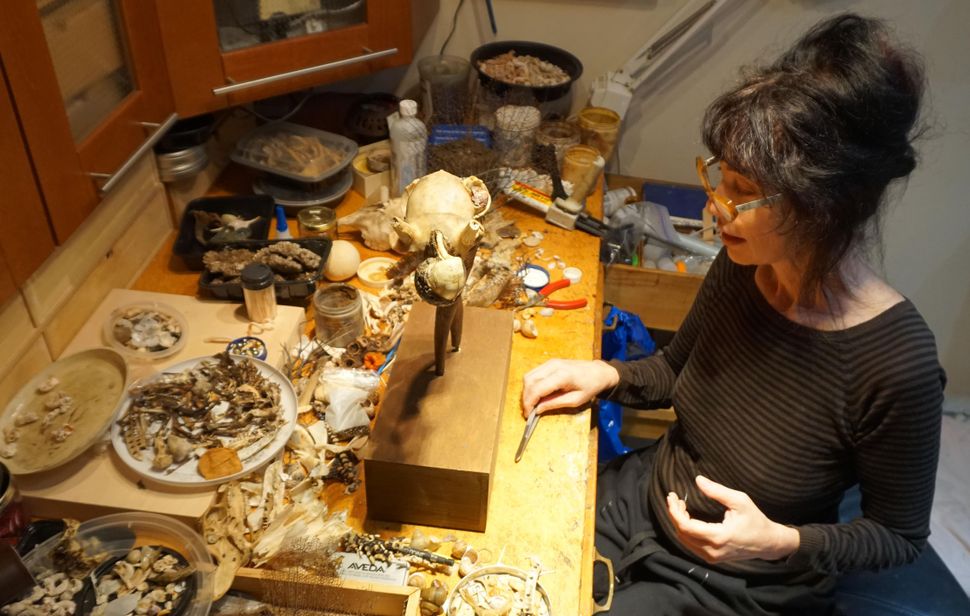 The man in her life was Adam — as in, the first human in creation. The toxic part came from thousands of mussel shells Genser ground to create a minutely detailed sculpture of him. And the struggle to survive is pitting Genser against heavy-metal poisoning, the result of polluted waters that tainted the mollusks she used as material.

Genser’s story sparked a worldwide media frenzy after she shared it with the monthly Toronto Life in December (“Sculptor Unknowingly Poisons Herself with Her Own Art”, screamed one headline).

But as Genser told the Forward in an interview from her home/studio in Etobicoke, just west of Toronto, much of the coverage missed the point of her story — and none of it touched on the Jewish DNA at the heart of her work.

“Everything Jewish shapes my art, but in a reactive way,” she said. “I’m a tribal Jew. I love my community. But I’m uppity about the words in Judaism, and I challenge what’s been written. Adam and Lilith are a challenge as I’ve created them.”

Genser’s haunting Lilith sculpture, like much of her art, uses natural materials to create a miniature world; the work reveals itself as a complex nesting piece that functions as its own universe. Lilith’s breasts function as doors which open a miniature Ark of the Covenant. “There are tiny scrolls you can’t remove unless you pull on her nipples,” Genser said. “Women’s breasts are the source of all nourishment. The work challenges women’s issues.”

In Leaning Woman, another complex sculpture, the figure’s hair is made from desiccated wasps’ nests. Her body’s constructed of lamb skulls, with lambs’ teeth around the lungs. Miniscule beetle larva form her heart-within-a-heart.

Adam, she said, confronts received wisdom even more head-on. “I feel this dark place we’re in today comes from the roots of a poisonous tree,” she said. “The [Biblical] words that man has dominion over the animals – that was a destructive view. It gave us ownership, like it’s all there for us. Instead of saying, ‘this whole world is something we’re part of’”.

A contrary streak runs in Genser’s family. Her great-grandfather, Avrom Pinsky, emigrated from Lithunia to become the first rabbi in Edmonton, Alberta, in Canada’s then-wild west. Her maternal grandfather, who fled Russia in 1928, “was a Trotskyist and had also longed to be a Rabbi. He had attended yeshiva but could not finish as a result of his sudden departure,” she said. After arriving in Canada, he became a “fairly radical” activist for indigenous rights, and did serve as rabbi for the tiny Jewish community of The Pas, Manitoba. “Judaism was never enforced on me,” she said. “I’m not self-hating. I love my community. But I question and challenge.”

Trained as a computer scientist at University of Toronto, Genser experienced an “aha” moment staring at a sunset after walking from a beach one summer. “I just thought, every human being experiences such awe at a sunset. Why? So that we’d find the planet beautiful, and preserve ourselves. I wanted art to recreate that feeling, and connect us to our love of the planet, but doubly so.” Her art career was born.

But Genser’s celebrated Adam sculpture ended up inverting her relationship to nature. As she recounted in the Toronto Life story — headlined “My Beautiful Death” — she began using blue mussel shells to create the piece in 1998, shortly after she’d completed her Lilith work. After buying shells in bulk in Toronto’s Chinatown, she’d spend 12 hours a day grinding and sanding shells to create Adam’s body. “They beautifully replicated the striations in his muscle fibres,” she told Toronto Life.

A few months into the project, Genser became afflicted with constant vomiting, nonstop headaches, and weakness. Whenever doctors asked if she worked with toxic materials, she said no. “I wasn’t allowing myself to consider the mussel shells poisonous,” she told the Forward. “I mean, we eat mussels. My brain wouldn’t allow me to accept the connection. Once I found out, it was, ‘Oh, shit’.”

After years of misdiagnosis, she learned the cause: Heavy metal poisoning. The symptoms, which plague Genser unrelentingly, include “hearing problems, cognitive difficulties, nerve damage, and metabolic issues – I can’t eat without problems. And a brain full of heavy metals has been implicated in Parkinson’s and Alzheimer’s.”

While her faith in her ability to heal is waning, Genser’s awe of nature remains undimmed. “I still have a great reverence for nature,” she said. “No artist can make anything as beautiful as nature does. But I also know I got poisoned by nature. When I look at Adam now, I think he’s magnificent. But I also grieving terribly for the very mussels he was created from. Their voices were crying to be heard. They’re trapped.”

Today, Genser said, she feels like they do. “I have no tools to hang onto hope,” she said. “I don’t know how to move forward, except I have no choice. I don’t know what’s coming for me.” Her “prayer”, she said, is an exhibit of her work at a Jewish institution like New York’s Jewish Museum.

“I’ve paid a terrible price,” she said. “But worse is that we’re destroying our world. This is a desperate moment for our planet, for art, for all of it. And we must keep discussing it and bringing it forward.”

This Jewish Feminist Artist Was Poisoned — By Her Own Artwork