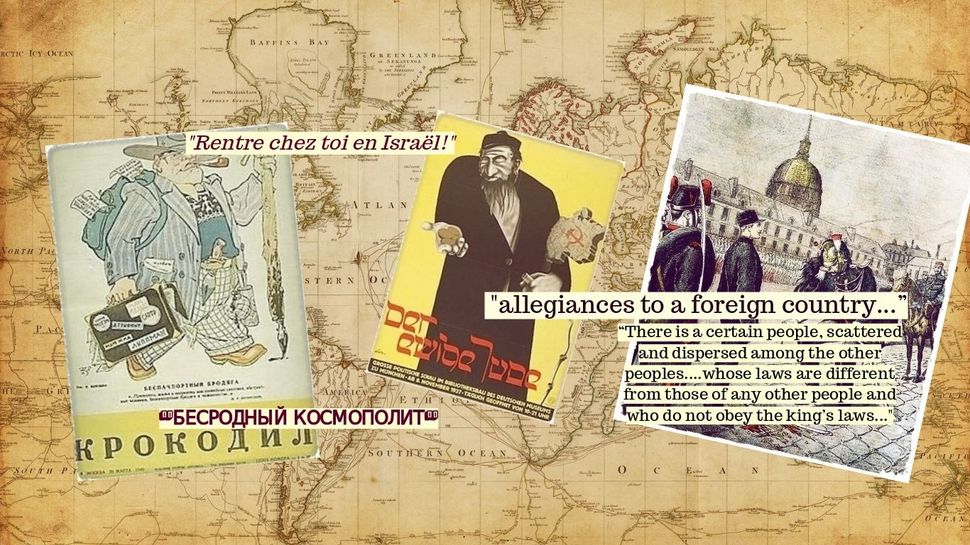 Jews have been accused of dual loyalty for centuries. Image by Forward montage

Purim is one of the more peculiar days of Jewish revelry; it is characterized by palace intrigue — jockeying for power, betrayal and sexual trickery — and hails Jewish victory over an avowed enemy. Laced with irony, the Book of Esther, also known as the Megillah, recounts the story of the Jews of Shushan in Persia. Owing to the courage and guile of Mordechai and his niece Esther, the Jews thwart the vizier Haman’s plot to annihilate them. In the end, it is the duplicitous Haman who hanged on the gallows reserved for the province’s Jews, turning a day of anticipated mourning into a blithe celebration.

While Jewish triumph ultimately defines the Purim story, the scripture’s paradoxical messaging also reveals it to be a deeply fearful one. Set against the backdrop of looming annihilation, Purim is the prototypical story of exile: In the face of moral uncertainty, the Jewish people use their own deft and fortitude to survive. Consequently, the Megillah emerges as a prism for the millennial Jewish struggle: Living in a land deemed not quite their own, a scattered and marginalized people are vulnerable to the machinations of those with power.

The fact remains that at the heart of Jewish blood-spill has been the dual loyalty canard, where the ‘Jew’ is seen averse to broader society. This perennial dilemma is reflected in Haman’s description of the Jews to Ahasuerus: “There is a certain people dispersed and scattered among the nations in all the provinces of your kingdom, who keep themselves separate. Their customs are different from those of other people, and they do not obey the king’s laws; it is not in the king’s best interest to tolerate them.” The timelessness of this charge — Jews usurping the status quo in service of an occult global agenda — exposes the bloody roots of the dual loyalty trope that has persisted in repackaged stereotypes for time immemorial.

In the Middle Ages, Jews were targeted because of their religion; charges of deicide and conspiracies of Jewish loyalty to a cabal involving the devil legitimized pogroms and top-down persecution. And in the 19th century, the most infamous manifestation of this charge surfaced when, on the basis of contrived and shallow evidence, French Captain Alfred Dreyfus, was convicted of treason by France’s military. While Dreyfus was later exonerated, his show-trial became a litmus test for national loyalty and the place of Jews within the state.

The Jew as disloyal agitator canard has also inculcated in social and political movements, where the same venomous politics that created space for Haman have allowed social or economic grievances to elide with Jew hatred.

In Germany, this mutation surfaced well before the stab-in-the-back myth emerged as the reason for its defeat in WWI. As early as 1916, for example, the German military ordered a “Jewish census” of its troops, hoping to reveal that German Jews were underrepresented in combat roles. When this hypothesis was proven false, showing that German Jews were, in fact, overrepresented, the census results were censored. Thereafter, stab-in-the-back stories formed the basis of Nazi propaganda and the dehumanization program that ensued. Echoing the lexicon found in Esther, a German official (quoted in Norman Cohn’s, Warrant for Genocide) said at the time: “The supreme government of the Jewish people was working hand in hand with France and England. Perhaps it was leading them both.”

The dual loyalty trope, of course, did not end with the Holocaust. Though initially supportive of the Jews and their nascent state, the Soviet government’s “anti-cosmopolitan” campaign fixated on the ethnic Jewishness of its victims and the absence of their roots in the Soviet Union. According to YIVO’s archives, propaganda aimed at weeding out “rootless cosmopolitans” (a metonym for Jews) emphasized the “anti-patriotic views” of the Jewish minority and their “tribe-like” affiliations. Stalin’s crusade culminated in the Doctors’ Plot of 1953, where mostly Jewish doctors were accused of conspiring to assassinate Soviet leaders. It was, we know, a pretext for the purge and arrest of Jewish professionals. 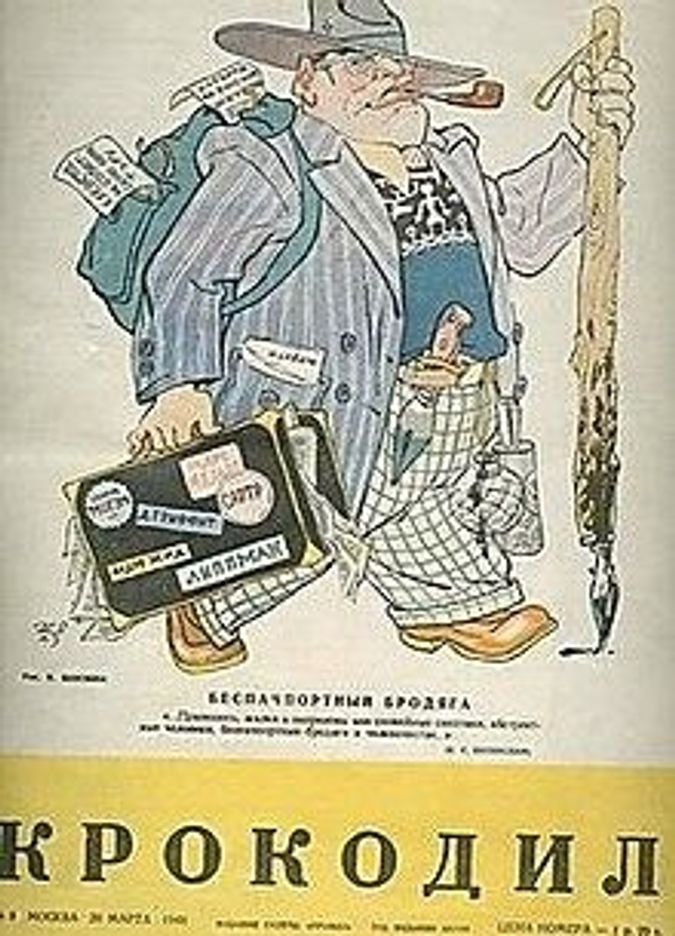 Stalin’s experiment, too, illuminates the stasis of the diaspora paradigm: Just as Haman plotted “to destroy, to slay, and to exterminate all Jews, young and old, children and women, in a single day,” Stalin had established a “Deportation Commission” and four large camps in Siberia widely conjectured to be for Jews. This plot was obstructed only because of the de facto dictator’s abrupt death.

Today, the struggle detailed in the Megillah again seems eerily relevant. The vulnerability of Jews to internal politicking is reflected in the increasingly high bar for what constitutes anti-Semitism. The dual loyalty canard and demonization of Israel are often weaponized and rebundled as mere criticism of the Jewish state. In Washington D.C., members of Congress have fulminated about “allegiances to a foreign country,” absent reference to Israel or any of its policies. At the same time, several politicians’ attributing American support for Israel to bought-off Jewish money shows that the advent of enlightened ideas and liberal democracy failed to stymie wild conspiracies about Jews that have long lived in the marrow of society. 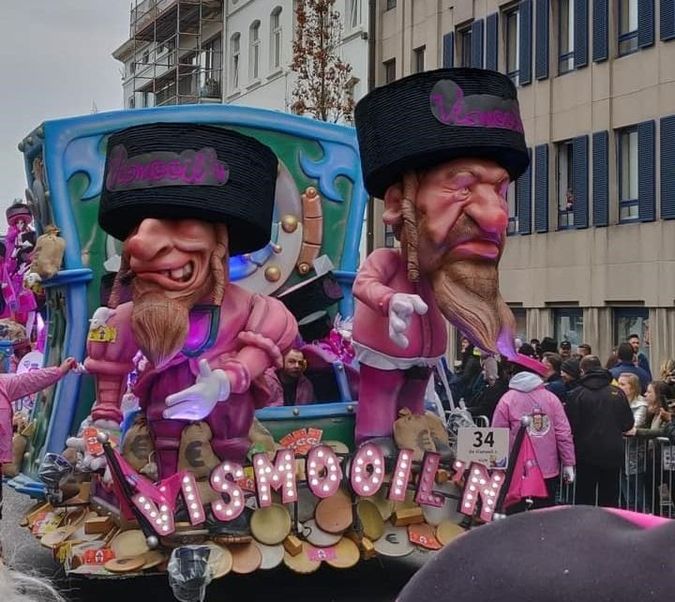 Eric L. Goldstein, a Jewish Studies and History professor, has explored Derrida’s theory on identity as it relates to the Jewish experience. The formation of national and cultural identities, he maintains, have always been driven by a process of alterity —that is, distinguishing between “those who belong and those who do not.” Goldstein writes that, “as a binary opposition to the ‘self,’ the ‘other’ becomes the symbol for all of the fears, anxieties and negative images from which the dominant group wishes to disassociate itself and thereby reinforce its own positive identity.” Herein lies the catch-22 for the contemporary Jew: Marginalized from the dominant group in a culture of intersectionality — where victimhood is ranked by category, and anti-Zionism is used to legitimize anti-Semitism —the Jewish claim to victimhood is equivocal. The Jew is, in essence, the anti-victim.

After the script turned on Haman’s plot for the Jews to “hang together,” the Book of Esther might have ended with the Jews returning to the land of Israel, yet they remained in Persia. Consequently, the Megillah has become a blueprint for Jewish continuity in the diaspora — one that is hauntingly ever relevant today.

Gabrielle works at The New York Times and previously worked at the Embassy of Israel in Washington D.C.