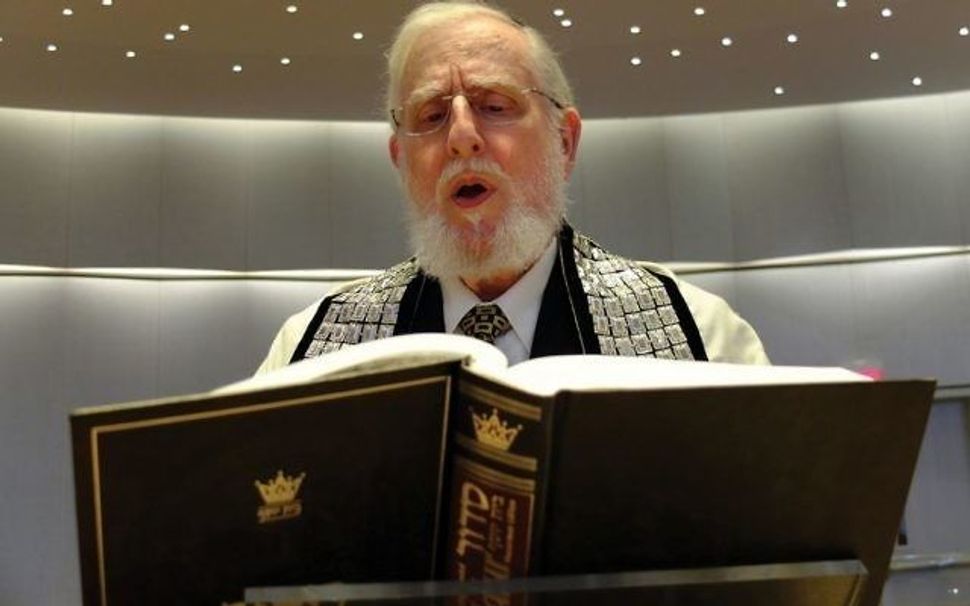 Let’s face it: Virtually everyone who becomes a professional singer is motivated by a fair amount of ego. The spotlight. The audience. The applause. The adulation. No singer can resist those perks. But I know one who did resist.

He could have pursued a Broadway career, but he chose to dedicate his voice to his fellow Jews instead. That voice awakened thousands of souls: at Yeshiva University’s Torah seminars for Jewish public school students, at rallies for Soviet Jewry and at Manhattan’s Lincoln Square Synagogue where, for over 50 years, he was the beloved cantor.

His name was Sherwood Goffin, but many lovingly called him “the Chaz” (short for chazzan, the Hebrew word for cantor).

I was privileged to bask in the Chaz’s rich baritone voice at Torah Leadership Seminars, at Soviet Jewry rallies and, for 23 years, at Lincoln Square Synagogue. And ever since he passed away last week, I have been pondering, what gave this modest, soft-spoken man his magic, magic that awakened dormant souls?

Well, I think I figured it out: Simply put, Sherwood Goffin was a paradox two times over.

First, the Chaz was a singer who cared more about listening than about being listened to. Surely his parents were blessed with a moment of prophecy when they named him Shimon, linked to the Hebrew word meaning to hear. It mattered not if the person speaking to him was the gifted girl attending his afternoon Hebrew school (now Supreme Court Justice Elena Kagan); the nine-year-old groupie trailing him after Sabbath services to announce, “Chazzan Goffin, we have all your records!”; or Lincoln Square Synagogue’s beloved Charlie “Buttons,” known for his button-laden denim overalls, who often slept in the Chaz’s tiny office. The Chaz would listen raptly, as if that person were the only one present. For Sherwood Goffin, singing was never about being a showman. It was about being a shaliach tzibbur, the congregation’s emissary, the conduit for our prayers. Perhaps that’s why I’d tremble when, cradling the Torah in his arms, he’d sing: “Gadlu l’Hashem iti, un’romema [and with that word, meaning “let us elevate,” his melody would ascend in a heavenward flourish to illuminate the text’s meaning] shmo yachdav. Proclaim God’s greatness with me, and let us elevate His Name together.” Six words, but for the Chaz, the two most important ones were iti (with me) and yachdav (together).

Second, implausibly, Sherwood Goffin was a singer who wasn’t a singer. Because the moment he began to sing, he disappeared and became the song. The Torah recounts how — to achieve the tranquility required for prophecy — the prophet Elisha needed to hear a musician: “Vehaya k’nagen hamenagen, vat’hi alav Yad Hashem. When the musician played, the Hand of God rested upon him [Elisha]” (II Kings, 3:15). The Baal Shem Tov gave the verse a twist: If the musician becomes his music, devoid of ego, then the Hand of God will rest upon him [the musician]. For the Chaz, singing was never about the singer. It was always about the song.

What prompted a kid from New Haven, Connecticut to become a chazzan? Addressing the Council of Chabad Chazzanim, Chazzan Goffin commented, “My mother used to sing me to sleep with [legendary cantor] Yossele Rosenblatt’s Elokai Neshama,” adding self-deprecatingly, “Maybe that’s what did it.”

Elokai Neshoma: My God, the soul that You placed within me is pure. You created it, You fashioned it, You breathed it into me, You safeguard it within me, and eventually You will take it from me and restore it to me in the Time to Come. As long as my soul is within me, I thank You, God.

As long as my soul is within me, I will thank You, God, for the privilege of having known Chazzan Goffin. And, to paraphrase Billy Joel’s Lullabye, if I sing the melodies that endeared the Chaz to me, then in my heart there will always be a part of Sherwood Goffin, the singer who wasn’t a singer, the singer who was — who is — a song.

Chava Willig Levy is a New York-based writer, editor, advocate and lecturer who zips around in a motorized wheelchair and communicates about the quality and meaning of life. Her memoir, A Life Not with Standing, was published in 2013.