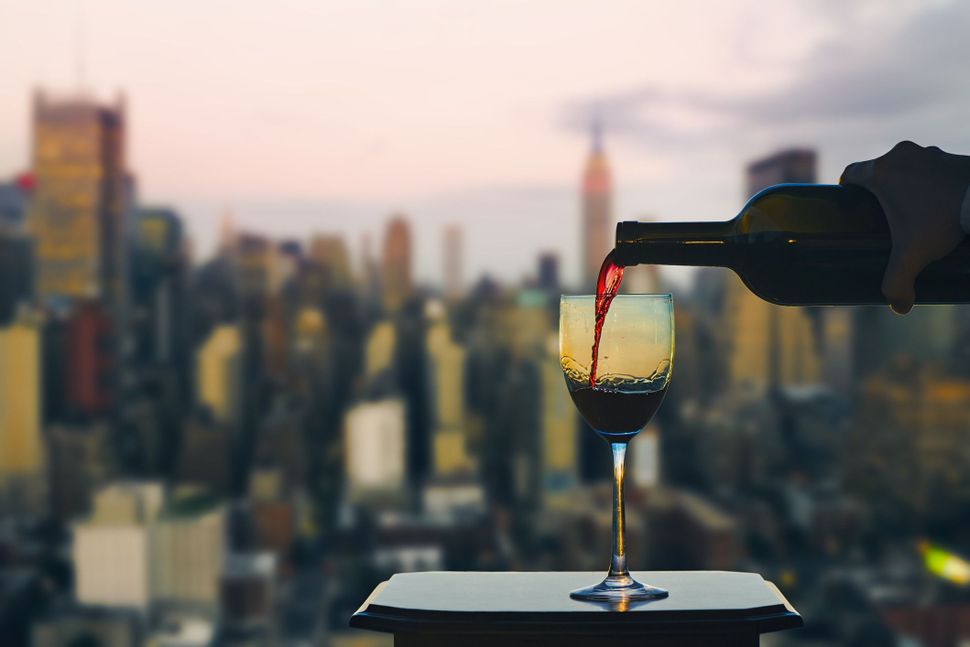 Wine poured at a NYC rooftop Image by iStock

Let’s add a fifth question to the seder this year: When did Passover become so cool?

Along with exquisite Sephardic and Mexican feasts, you’ll have options this year for biodynamic, Indian-inspired, and James-Beard-Award-winning-chef seders.

Biodynamic at Bouley April 19, NYC: With a menu by iconic NYC chef David Bouley, this “celebration of freedom and liberation” promises an all-biodynamic feast, kosher-for-Passover wine pairings, and a haggadah created especially for the occasion. Rabbi Deborah Hirsch of The Village Temple handles MC duties, with wife Carole Rivel as musical accompaniment.

Global-themed seder at Jeffrey’s Grocery, April 19-27, NYC The framework of the Passover meal at Gabriel Stulman’s hotspot sounds traditional – matzoh, maror, karpas, etc. – but the food’s anything but. Get ready for Korean matzoh-ball soup with kimchi and daikon, an Indian-inspired lamb shank with madras curry, a Manischewitz Whiskey Sour – and even an exotic deviled egg from the US of A.

Second seder at Russ & Daughters, NYC, April 20 Passover wouldn’t be Passover without the raucous seder at Russ & Daughters, the Lower East Side offshoot of the legendary appetizing store. Rebooted-traditional holiday delicacies include gefilte fish with freshly grated horseradish, beef brisket with mashed potatoes, and – of course – pickles from the barrel. Led by Rabbi Andy Bachman, this year’s seder “will celebrate the lives of the Yiddish poets and partisans who exemplified faith and fortitude during the years of the Second World War.”

Passover at Safta, Denver, April 19-27 How often can you get a James Beard Award-winning chef to prepare your seder meal? At his acclaimed Israeli-inspired eatery, Chef Alon Shaya will offer house-made, wood-fired matzo, fig/date/pistachio haroset, duck matzoh-ball soup with morel mushrooms, and Wagyu brisket. You can savor the entire seder on April 19 and 20, then order Shaya’s holiday menu a la carte through the following week. Afikoman bonus if you know the English translation of the restaurant’s name.

Mexican-themed Passover at Abe Fisher, Philadelphia, April 19-20 Guacamole with gribenes. Duck pozole. Lamb shank mole. Gefilte fish escabeche. Hardly sounds like your typical seder meal, which is why this Mexican-accented feast sounds so intriguing. Owned by Michael Solomonov and Steven Cook’s Cooknsolo group, Abe Fisher’s helmed by Chefs Yehuda Sichel and Mario Juarez; even if they boiled an egg, these two would find a way to make it exciting.

Humanistic Passover Seder La Baraka, Long Island, NY, April 22 Belief in a “supreme deity” is optional in Humanistic Judaism, which emphasizes “history, culture, civilization, and ethical values”. At this casual seder inside a cozy French/North African restaurant, the Humanist Jewish Congregation of Queens will weave “contemporary and traditional readings” along with music. The most traditional thing about this one is the menu — matzo-ball soup, gefilte fish, and haroset, for starters.

…and honorable mention to this Passover-inspired dessert:

Land of Milk and Honey, Ample Hills Creamery, NYC Partnering with nouveau-Jewish artisan baker The Matzo Project, this Brooklyn ice-cream company – Food Network called it the “Best Ice Cream in America” – is raising a scoop to Passover with “Land of Milk & Honey”, a salty honey ice cream with pieces of cinnamon-bun Butter Crunch matzo. Sounds like it’s worth parting the Red Sea to get this one; it’s available in-store and online through April 27.