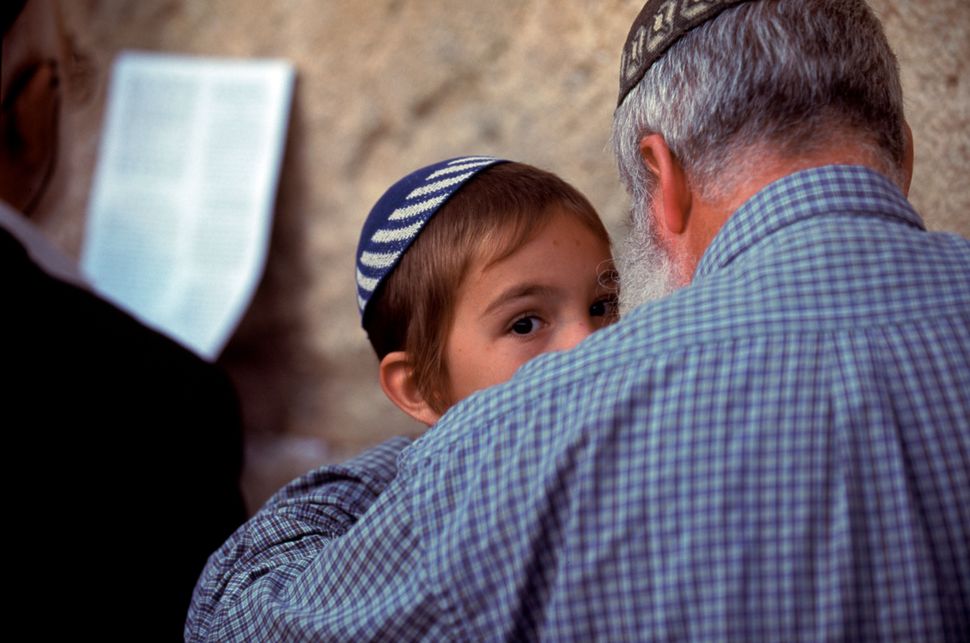 Annie Noonan was the savviest sixth-grader in my class. She lit incense and smoked cigarettes. Her home was lightly supervised. She was the first of my friends to make my parents uncomfortable, which made her all the more fascinating. And most exciting of all, she was a witch.

Apparently, this was something a person could be. Which meant that I could be one too.

Wicca wasn’t the same kind of magic I had believed in when I was little. The spells and rituals produced no fast results, nor did we expect them to. But at Annie’s shrine in the woods, we connected with nature, with ourselves, and with the goddesses and gods of the Greek pantheon.

And while my permissive, liberal, Massachusetts parents saw no cause for serious alarm in any of this, I was ambling unthinkingly towards my first significant conflict with my family. The High Holidays were approaching. And the thought of praying in a language I didn’t understand, to an unrelatable, angry, male, biblical God seemed tedious – a pale shadow of the kind of spirituality I was after.

I made my announcement to my family, informing them that I was no longer Jewish.

I didn’t expect any trouble. After all, Judaism was a religion which we practiced two days out of every year. Never at any moment had I been led to believe that it was of much importance. But apparently it was. My father reddened. I had crossed a line that I scarcely knew existed.

He was angry. He made it clear that there was no way in hell that I would be skipping services. Moreover, he didn’t give a damn what I did in the woods with Annie Noonan. I was a Jew whether I liked it or not.

Eighteen years later, my father and I are still arguing about Judaism. And while the terms of the argument have changed, the heart of the thing has not.

I live in Israel now. I attend a daily minyan. I keep kosher. I’m a far cry from Orthodox, but my observance trends upwards with the years, not downwards.

My father finds this both puzzling and worrying. He frets that my kosher stringencies may someday alienate me from my own family. He thinks that religion and religious people are exactly what’s wrong with the world.

When these discussions become heated, as they often do, I ask him to consider what it is he wants from me.

He’s already told me not to abandon Judaism. That it is, in fact, an un-abandonable fact of my existence. Now he wants to tell me that I shouldn’t embrace it either?

I’m reminded of a quote from Forest Dark by Nicole Krauss: “We teach Jewish children to bind themselves. And for what? Not for beauty… not even for God, or the dream of a miracle. We bind and are bound because the binding binds us to those who were bound before us, and those bound before them, and those before them, in a chain of ropes and knots that goes back three thousand years…”

I know I’m not the only Jewish boy to encounter this conflict. My friend Yitzhak, who grew up in a Haredi home in a Jewish settlement near Jerusalem, has a similar dynamic with his father. Yitzhak is no longer religious. He is a student in Tel Aviv and works nights at an upscale restaurant. The fact that this restaurant isn’t kosher is one of many points of contention between him and his father.

On the one hand, our stories could not be more different. Yitzhak’s father is an ultra-Orthodox settler. My own father is a tattooed Harley-Davidson enthusiast. Still – they have two things in common: They want their sons to be Jewish.

And they want their sons to be Jewish in the same way that they are Jewish.

It’s been a good five years since I’ve been with my family on Passover, but in two days, I’ll be boarding a plane and heading to Boston.

We will sit around the table, toss rubber frogs, try to sing Chad Gadya’s final verse in one breath, and of course, we will read about the four archetypal sons: the Wicked Son, the Wise Son, the Simple Son, and the Son Who Doesn’t Know How to Ask.

I know these sons well.

I was the Wicked Son when I marched to my father and said, with scorn, I am not a Jew.

I was the Simple Son when, years later, I began reading books about Judaism – exploring it with curiosity and excitement as I had once explored neo-pagan witchcraft.

I have tried to be the Wise Son – attending synagogue, disconnecting from technology and labor on Shabbat, and attending a Torah study class. But I don’t always know how to be my father’s son.

So how am I really to know if I’m wicked or wise? If I’ve strayed or been faithful?

How (and whom) should I ask?

We’re getting better at having these conversations. My father makes an effort not to trash-talk religion or religious people in front of me.

I, for my part, try to assuage any fears he might have. I assure him that my religious practice won’t keep me from eating off of his plates. I add that even if it did, he could trust me to handle that transition with love and respect.

But sometimes we still spar about the meaning of things.

About God. About prayer. About pork.

At the bottom of all of this is something much simpler and much harder than a debate about theology or the significance of religion.

There’s a father afraid that he will lose his son to a world he doesn’t relate to.

There’s a son afraid that his father will look upon him as a stranger.

Each year at the Seder, when we speak of the four sons we forget to think of their four fathers.

Fathers who, like the sons, are really just four sides of one individual.

Four fathers for four sons – bound in love and argument – hoping to pass on what’s most vital from one generation to the next, without dropping it, without breaking it, without making it appear either too heavy or too light.

Matthew Schultz is a writer based in Tel Aviv. His first collection of essays, What Came Before, is forthcoming with Tupelo Press. His work has also appeared in Best American Nonrequired Reading, Ecotone, Haaretz, Tablet and elsewhere. Follow him on Instagram