The Ancient Tradition Of Counting Down Till The Seder Ends Daniel Oppenheim Moritz’s depiction of a Passover Seder. Image by The Jewish Museum

The numbers, scribbled coyly in the upper left-hand corner of the page, are nearly obscured by the crease of the binding. Defacing a Haggadah on Passover to register relief at reaching the end of the service was something a twenty-year old shtetl bokher might well be bashful about.

I first picked up this tattered and yellowed booklet 101 years later, while rummaging through the papers of my late grandmother, Nikhama Bukhman. Printed in 1901 in Vilna, the Jewish cultural capital of the Russian Empire, it belonged to Nikhama’s father, Iosel, who lived in Khoyniki, the eastern Belorussian shtetl where Nikhama was born in 1922. On the Haggadah’s last pages is a translation of Had-Gadya, the Aramaic-Hebrew song about a hapless little goat and the ultimate power of God; the parable’s playful warning is rendered in Russian for the Empire’s rapidly assimilating Jews. Opposite, Iosel assiduously recorded (in Russian rather than Yiddish) the much-anticipated times that the Seders ended – when those gathered around the table could finally eat. 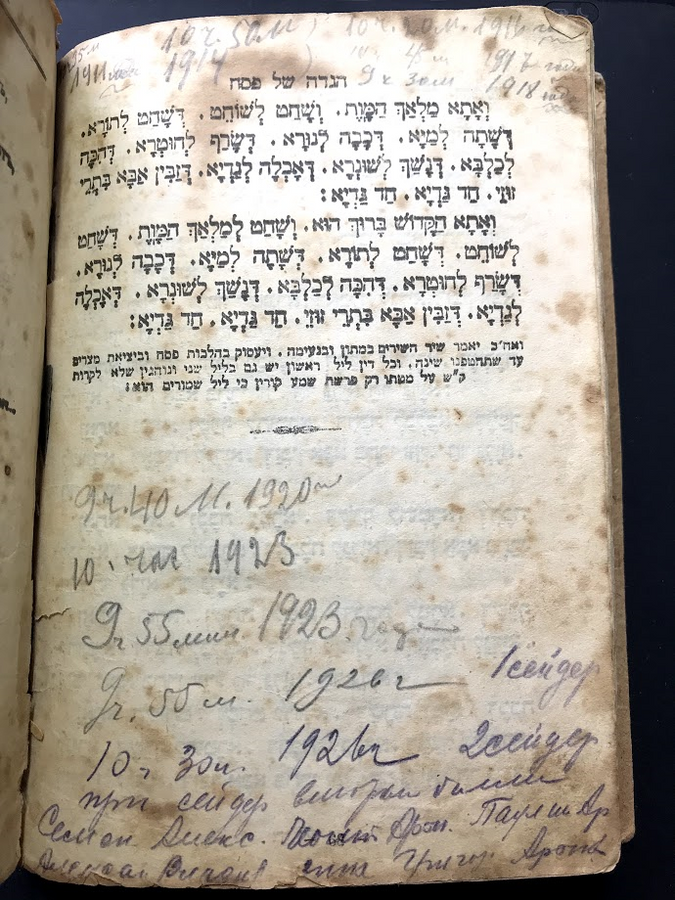 Perhaps he thought the better of it for the next two years, but then Iosel was back at it again, marking the end of the 1914 Seder at 10:50 pm. The upper left-hand corner of the page was already taken, and there were few places left to hide; but Iosel was also three years older now, perhaps more confident. The numbers and letters are larger and prominently placed. There was certainly no reason to think that today’s or tomorrow’s would be the last peacetime Seder for years.

When Iosel next recorded the time that the Seder concluded, in April 1916 (10:20 pm), the eastern front of the First World War had stalled bloodily but safely far to the west of Khoyniki. The front was still stalled in April 1917, and there was likely less food on the table; but the hated Tsar Nicholas II had just abdicated, and Iosel and his Seder companions sat down to their meal at 10:45 pm — not as subjects, but rather citizens.

However, if they celebrated deliverance from their own Pharaoh, they did not have much time to enjoy it. That November, Lenin’s Bolsheviks seized power in Petrograd, plunging the country’s citizens into unprecedented uncertainty. After peace talks broke down in February 1918, the Germans thrust into territory abandoned by the disintegrating Russian army. On March 28, when Iosel and his companions concluded their Seder at 9:30 pm – the earliest time that he ever recorded in the Haggadah – they did so as citizens of the anti-Bolshevik Ukrainian People’s Republic (which had just annexed the area) and subjects of the German Kaiser’s military administration (which actually controlled it).

It was reason enough to hurry up and eat. As if to commemorate the dizzying changes since the last Seder, Iosel underlined the word “year” after 1918 with two squiggly lines, one more than usual. Perhaps he was pleased with himself for seeing his little tradition through a fifth year, which, like the year before, had been so unkind to traditions. 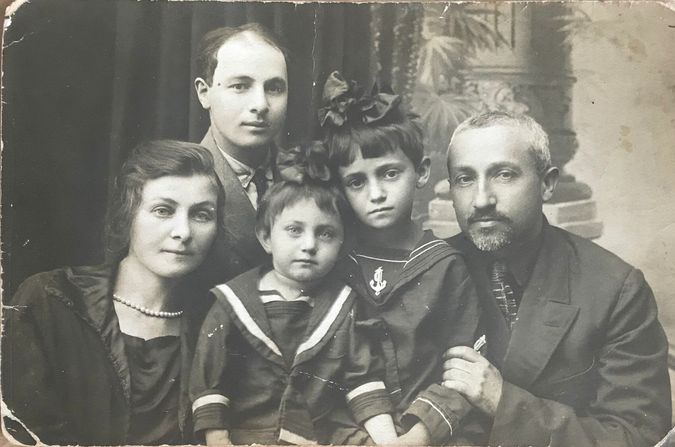 “Iosel (on the right) and his wife Beila in 1932, with the author’s grandmother and her little sister dressed in sailor suits, and with Beila’s younger brother, Leyb, standing behind them. Both Leyb and his younger brother would be called up into the navy and go missing in action on the Black Sea in the first days of the Nazi invasion.” Image by Andrey Shlyakhter

A year later, both the Ukrainian People’s Republic and the Kaiser’s army were, as Trotsky might have put it, in the dustbin of history. There is no entry for 1919. Perhaps the Civil War interfered and there was no Seder; just two weeks before Passover, the Red Army had recaptured Khoyniki from the Bolsheviks’ bitter rivals, the Left Socialist Revolutionaries. However, the takeover of Khoyniki by Polish troops – notorious for the violence and humiliation they often visited on the Jews – did not interfere with the Seder in March 1920, although it was another reason to hurry up and eat, at 9:40 pm.

The Red Army finally pushed out the Poles in June; but in early November, Khoyniki fell to the fearsome warlord Bulak-Balakhovich, whose men, joined by peasants from the surrounding countryside, pillaged, raped, maimed, and murdered the shtetl’s inhabitants for days, leaving 42 dead and as many wounded. The Red Army routed Bulak-Balakhovich later that month (although its cavalrymen also looted Khoyniki after liberating it), but his raiders returned in February 1921, when their pogrom lasted nearly a week and left up to 60 dead. My grandmother told me that a relative of hers, a young woman, survived one of these attacks by pressing herself flat against the inside of the hut’s outer wall, cowering within reach of a “bandit” who had stuck his head through the window in search of prey. For a town of fewer than 400 families, there was little to celebrate that Passover. If Iosel partook in a Seder, he left no playful record of it in his Haggadah.

As Khoyniki recuperated, however, Iosel revived his little tradition. There are entries for both Seders in 1923 (10 pm and 9:55 pm), Iosel’s first Passover as a father; and two for 1926 (9:55 pm and 10:30 pm). For the second Seder of the latter year, Iosel also wrote down the names of those in attendance. Perhaps he redoubled his efforts to make up for the years that went unrecorded in his Haggadah, some of which were best left unremembered anyway. Perhaps the more extensive recording reflected a return to relative normalcy under the Bolsheviks’ New Economic Policy, a welcome reprieve after years of upheaval. Perhaps, too, writing down the names of the attendees, like recording the conclusion of the Seders amid war, Revolution, and Civil War, was, like the Seder itself, a celebration of miraculous survival.

When Iosel first wrote down the time the Seder ended in 1911, he did not yet know that he was beginning a personal tradition. His was a playful, even subversive gesture; by memorializing the holy day in writing, he was also violating its strictures. As Iosel’s familiar world crumbled around him, however, his annual ritual acquired other layers of meaning. Continuing to play, and thus to laugh, when there was increasingly little to laugh about became subversive in a different way, defying not only rigid religious strictures but Armageddon itself. Anchors in the storm, the Seders themselves became acts of defiance – increasingly so under the militantly atheist Bolsheviks. We do not know why Iosel ended his tradition after 1926. By 1929, however, the Stalinist leadership, intent on violently modernizing the country and crushing potential opposition, led a renewed assault on religion. Leaving a written record of one’s religious rituals, especially with the names of the participants, now risked a lot more than an elder’s disapproval.

However, Iosel’s record-keeping had been subversive in another, very traditional way as well. Waiting – for Moshiach, for Jerusalem, for the tsar to die, for letters or dollars or tickets to arrive from America, waiting for things to get better even as things got worse – has been central to Ashkenazi culture. As Iosel’s Haggadah reassures us, so, too, has been waiting for the Seder to end.

Andrey Shlyakhter is Director of Education at Hermiona Education (Cambridge, Mass. and Moscow, Russia), and a Center Associate at the Davis Center for Russian and Eurasian Studies, Harvard University. He is currently preparing his PhD dissertation, “Smugglers and Commissars: Contraband Trades, Soviet Solutions, and the Making of the Soviet System at the Border, 1917-1939,” for defense at the University of Chicago. He can be reached at andrey@uchicago.edu.

The Ancient Tradition Of Counting Down Till The Seder Ends