I Studied American Jewish Teens. This Ritual Predicts How They Feel About Being Jewish. 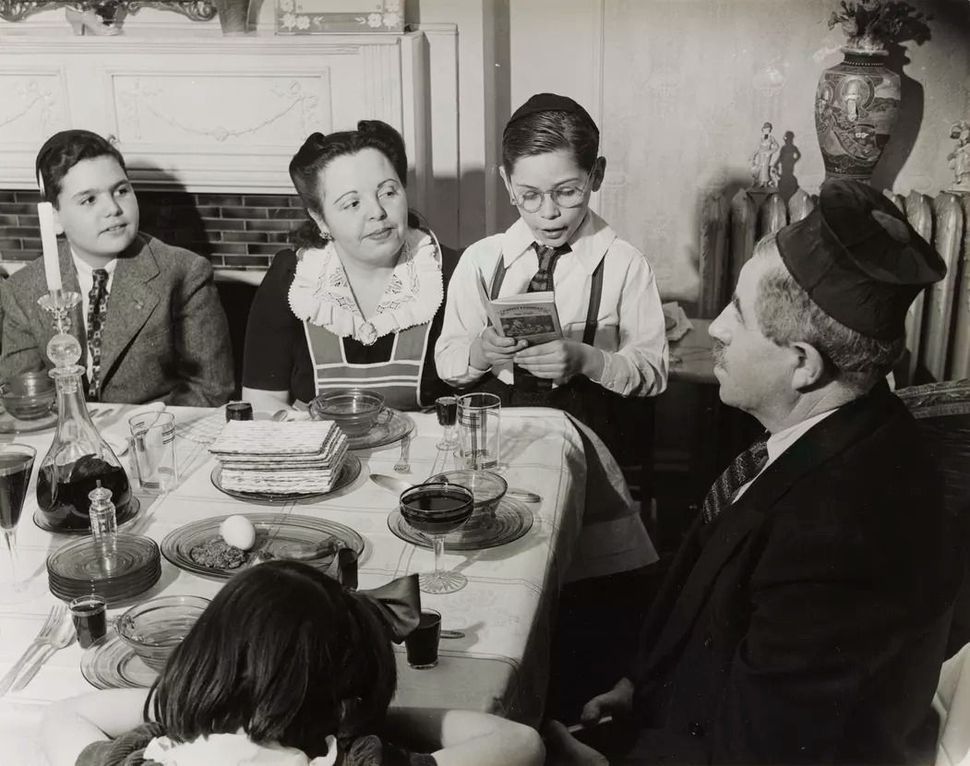 Multiple studies have demonstrated the benefit of the family dinner, especially for adolescents.

Regular family dinners have been associated with teens developing healthy eating habits, lower rates of high-risk behaviors, and better mental health. But what good can just one annual family meal do for adolescent development? How would that dinner have to be different from all other dinners?

More than any moment in the calendar year, the Passover Seder points to the vitality of Jewish life in America. Seventy percent of American Jewish adults will likely participate in this ritual, which dates back to antiquity. This makes the Passover Seder one of the most frequently practiced and durable Jewish rituals in America. New research suggests it is also an extraordinarily powerful moment to cultivate Jewish values and sensibilities in the next generation.

My colleague, Dr. Liat Sayfan, and I recently led the largest study of American Jewish teens ever, garnering over 17,500 respondents. The study was designed to understand how teens’ participation in Jewish activities related to their attitudes toward being Jewish, as well as to their sense of connection and responsibility to others. We were surprised to find that Jewish teens who reported regular attendance at a Passover Seder rated themselves higher on almost every outcome we measured. The effect was small but remarkably consistent. An activity that a child participated in once a year seems to make a measurable contribution to their attitudes about being Jewish as a teenager. The Passover Seder, statistically speaking, outpaced many other childhood activities we measured – including those that required much more intensive commitments of time and resources.

So why is this night different from all others?

The Passover Seder includes a number of features that position it to be an especially important Jewish practice for contemporary American Jews, especially a younger generation currently coming of age. For one, it is a home-based ritual, centered around the family table; our research shows that Jewish teens primarily connect their Jewishness to things they do in their own homes with their family. With synagogue membership in decline, Jewish rituals that take place in the home take on increased importance. And because the Passover Seder takes place in the privacy of one’s own home, it lends itself to flexibility and improvisation outside the dictates of rabbinic or institutional authority. The Haggadah, the traditional text that serves as a guide to the meal, may be mass-produced (there are more than 50 million copies of the Maxwell House Haggadah in circulation), but it’s up to each family to decide what to sing and what to skip, what foods best capture their heritage and tastes, and how they will navigate tradition and the new. This do-it-yourself approach appeals especially to younger American Jews who want some autonomy in determining how to lead a Jewish life.

The Passover themes of freedom and renewal support interpretation through the lens of the liberal values and political affiliations held by the vast majority of American Jews. No amount of tweeting “Jexodus” can change the fact that younger American Jews still align overwhelmingly with the left and are even more liberal than older Jewish adults. From Labor Zionist third Seders to the 1969 Freedom Seder and into present times, the Seder has been used by progressive Jewish groups as a vehicle to assert and celebrate these liberal values. New symbolic elements like Miriam’s Cup and an orange on the Seder plate, once radical novelties, are now common place, signaling not only the desire for the full inclusion and participation of women and queer Jews, but also the belief that the Seder table should be a place that reflects evolving values.

While religious authorities differ on the matter, the Passover Seder in America has often been seen as an opportunity to welcome non-Jews either as guests or full participants. President Obama famously became the host of a Seder in the White House while he was in office. As the intimate circles of American Jews increasingly include people raised in other religious traditions, the Seder becomes a ritual that feels open, inclusive, and welcoming. The Passover table has plenty of room for non-Jewish grandparents, in-laws, romantic partners, neighbors, and friends. The Haggadah begins with the declaration, “Let all who are hungry come and eat.” American Jews are proud to share that message, both in its humanitarian spirit and in the invitation some read to open their Passover table to others.

Perhaps most importantly, the Passover Seder is a highly ritualized meal. It’s a family dinner, but with pedagogy built in. Grounded in the Haggadah, the meal provides instruction, not just about what types of food items to eat or when and how to eat them, but also what these flavors mean in the telling of a shared story of who Jews are and what they care about. Essentially the Haggadah serves to ensure that the Seder is a scripted conversation between generations.

Our study of American Jewish adolescents showed that Jewish teens love and respect their parents and grandparents and see themselves as generally in sync with their values and traditions. American Jewish teens, perhaps like all teens, want opportunities to talk with their families about what matters most in life. The Seder is an extraordinary family dinner that helps teens and their families do just that. Perhaps the emotional heart of the Seder is the moment when the youngest person in attendance is prompted to ask a series of questions of their elders. The Haggadah guides the adults at the table to answer the questions of the younger generation. Is that where the secret power of the Seder lies?

Arielle Levites, Ph.D., is co-author of the 2019 study, GenZ Now: Understanding and Connecting with Jewish Teens Today, conducted and published by The Jewish Education Project and Rosov Consulting. She is the Golda Och Postdoctoral Fellow at the Jewish Theological Seminary.

I Studied American Jewish Teens. This Ritual Predicts How They Feel About Being Jewish.