How The Haggadah Text Changed Over The Centuries 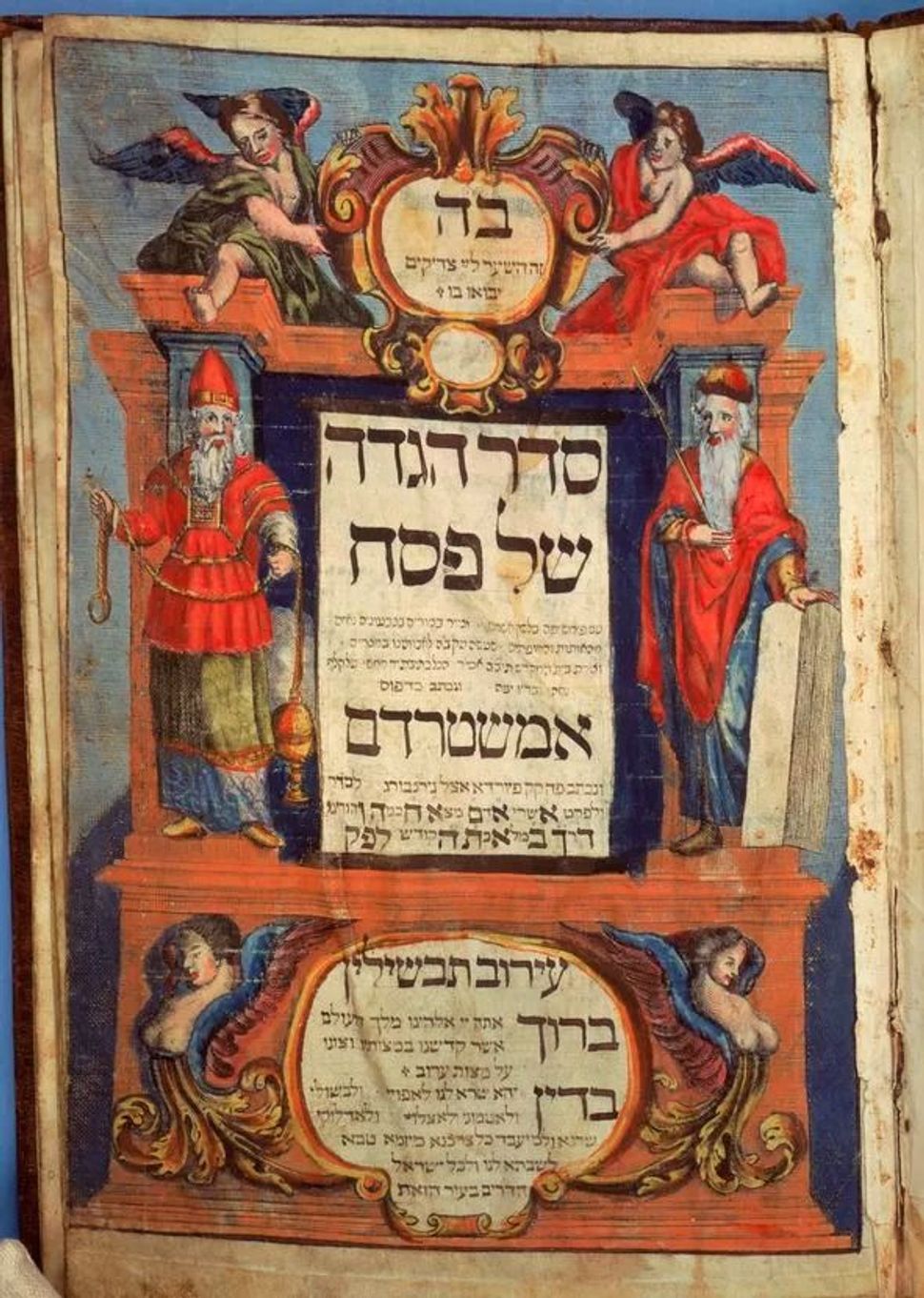 1733 Haggadah from Fürth (Germany) Image by The Jewish Museum

The Four Questions, or ma nishtana, is one of the most familiar parts of the Passover haggadah and seder. After weeks of preparation, or at least anticipation, the youngest child present arises—perhaps even stands on a chair—and recites a well-known formula that’s been part of Jewish tradition for as long as anyone can remember.

Although the words of the time-honored ritual roll off the tongue, we can, in good Jewish fashion, still ask plenty of questions about the Four Questions. Ma nishtana may be an ancient and iconic religious text, but its meaning is hard to pin down. Moreover, it would seem that the words themselves have changed over the centuries. It’s particularly interesting to consider what these debates and developments say about the seder as a whole.

Ma nishtana is one of several introductory paragraphs to the haggadah’s retelling of the story of the Exodus. It begins, “Mah nishtanah ha-lailah ha-zeh mi-kol ha-lelot?” —which, as we’ll translate for now, means, “Why is this night different from all other nights?” The first line is followed by four specific questions highlighting unusual practices of the evening: why do we eat matzah? Why do we eat maror (bitter herbs)? Why do we dip vegetables twice in liquid? Why do we eat while reclining?

Yet, if these are the questions, where are the answers? The haggadah eventually explains why we eat matzah and maror, but only pages later, closer to when they are eaten and when everyone is probably a good deal hungrier. And if you’re looking in the haggadah for an explanation of the dipping and reclining, you’re out of luck.

For this reason, many commentators from medieval times until now have suggested that the term Four Questions is a misnomer. They argue that careful translation of ma nishtana yields only one question. According to this approach, “Why is this night different from all other nights?” really means: what is the reason why tonight’s practices differ from those on other nights? Thus, the references to matzah, maror, dipping, and reclining are not independent questions demanding answers, but four supporting examples of practices that make Passover night out of the ordinary.

If there’s only one question — what happened that explains why we eat matzah and do other unusual things — we only need one answer, and the haggadah supplies it immediately following ma nishtana: “we were slaves to Pharaoh in Egypt, and the Lord our God took us out from there a strong hand and outstretched arm.” We are commemorating—even reenacting—the Exodus, which explains, on the most basic level, what makes the seder night different from all other nights.

The one-question-not-four approach seems straightforward, but not everyone agrees with it. Professor Richard Steiner of Yeshiva University, who’s written an exhaustive study on how to translate ma nishtana, notes that in 1550, a Ladino women’s prayer book from Salonica translates, “how different this night is from all other nights!” The Judeo-Spanish translation in a famous 1609 Venice haggadah also understands ma nishtana as a declaration, which would yield: look how different this night is from all other nights! On other nights we eat all types of bread, but tonight, only matzah! And so forth. According to this reading, the Four Questions are not questions at all, and no answers are required.

And there’s at least one more way to understand this beguiling text: that it’s a pop quiz. According to this last approach, there’s one question—“what do we do differently on this night then on all other nights?”—and four answers: we eat matzah, we eat maror, we dip, and we recline. In this reading, the question and its answers are self-contained.

We are left with an array of possibilities: four questions, one question, no questions, or four answers. To understand what’s behind this debate, we need to investigate the origins of ma nishtana. The text appears in the Mishnah, the foundational source of Jewish law edited by Rabbi Judah the Prince around 200 CE. The Mishnah’s instructions about how to conduct the seder include the following:

They fill a second cup. At this stage, the son questions his father. And if the son lacks the intelligence to ask, his father teaches him:

In the Mishnah, when the child does not how or what to ask, the father steps in, and the ma nishtana text follows. But what exactly is the father doing? There are at least two possibilities.

It could be that the father teaches the son the content of ma nishtana—four pieces of information about how Passover night differs from other nights. If so, the Mishnah falls into the ma-nishtana– consists-of-statements-and-not-questions camp. But it’s equally plausible that when the Mishnah says “his father teaches him,” it means that the father teaches the son what to ask. In this case, the ritual text of ma nishtana is a question—the son just needs to be taught how to ask it first. In the Mishnah, like in the haggadah, we are left with ambiguity.

But wait, there’s more. It’s not only that the Four Questions are difficult to interpret. The text is also uncertain.

You might have noticed that the “questions” listed in the Mishnah and the haggadah are not identical. For example, the Mishnah has a “question” about eating roasted meat, but the haggadah has a question about reclining instead.

And it’s not just the Mishnah and the haggadah that disagree; there are also differing versions of each text. For instance, the most reliable medieval manuscripts of the Mishnah don’t discuss the maror, and end up with three questions or statements, not four. And there are variants of the haggadah with as few as two and as many as five “questions”!

So what happened? Scholars believe that the wording of both the haggadah and the Mishnah changed throughout the Middle Ages to reflect different practices and understandings. For example, there once was a custom to eat roasted meat at the seder, but when it fell out of favor, many haggadot dropped the “question” about it and replaced it with one about reclining. In that case, the haggadah changed while the Mishnah remained the same. In other instances, such as when it came to adding a question about the maror, both the Mishnah and the haggadah were emended.

All that confusion is just about the Four Questions. But in truth, the interpretation and historical development of each portion of the haggadah is intriguing. We’ll look at one more section—the possible “answer” to ma nishtana we discussed above—the paragraph beginning “we were slaves to Pharaoh…,” which is often referred to in Hebrew as avadim hayinu.

One of the earliest haggadot we have is a tenth or eleventh century text that was found in the Cairo Genizah. The Cairo Genizah is a repository of discarded Jewish documents that were left intact but mostly forgotten in the storeroom of the Ben Ezra synagogue in Cairo for centuries because of a very broad interpretation of a halakha frowning upon the destruction of holy texts. The Genizah began to attract scholarly attention at the close of the nineteenth century. The finds from the Genizah have revolutionized our understanding of early medieval Jewish society and the development of Jewish texts including the Talmud.

This haggadah uncovered in the Genizah doesn’t include the avadim hayinu paragraph at all. It skips from ma nishtana to a verse from the biblical book of Joshua discussing the Children of Israel’s idolatrous origins. So our first observation is that if ma nishtana is indeed the child’s question, and avadim hayinu is missing, the haggadah provides no explicit answer to the question.

But this shorter version of the haggadah is fascinating for other reasons too. When Rabbi Natronai—the Gaon of the Sura academy and the leader of Babylonian Jewry in the mid-ninth century—learned that some haggadot omitted avadim hayinu, he condemned those versions as heretical Karaite works. In his view, because avadim hayinu is discussed in the Mishnah, it should not have been omitted. The Karaites, a group still existing in small numbers today, do not follow rabbinic oral traditions, such as those contained in the Mishnah, and did not recognize Geonic authority.

Today, however, scholars believe that this abbreviated haggadah is not Karaite, but represents an early tradition from the land of Israel. This tradition omits far more than just avadim hayinu, and is different from contemporary haggadot in several notable ways. It is obscure nowadays precisely because it was opposed by the Babylonia leadership; our haggadot are based on Babylonian Geonic texts. Thus, the haggadah from the Cairo Genizah shows that as late as the tenth century and perhaps beyond, there were two competing versions of the haggadah used by Jews in different communities.

It should be clear by now that the Passover haggadah developed over time. Even though some of its texts can be traced all the way back to the Mishnah, the haggadah grew and changed over the ensuing centuries. Even once its text became fixed to a large degree, debates over its interpretation continued.

Although the seder night is all about passing down stories and traditions, questions play an integral role in that process of transmission. The haggadah, like all texts lived and breathed and recited by Jews, is at once a literary unit and a cacophony of voices. Disagreement and uncertainty are part of how Judaism gets made. We ought to recall that the journey from Egypt to the Promised Land was never a straight shot, but was and still is laced with detours and doubts.

When viewed in this light, ma nishtana’s ambiguity is valuable, or perhaps even intentional. For in the end, the haggadah was created by those who love asking questions, retelling the Jewish story, which is still unfolding.

Yosef Lindell is a lawyer, writer, and lecturer living near Washington, DC. His essays have appeared in The Atlantic and The Lehrhaus, among other places.

How The Haggadah Text Changed Over The Centuries