Growing Up With Mengele 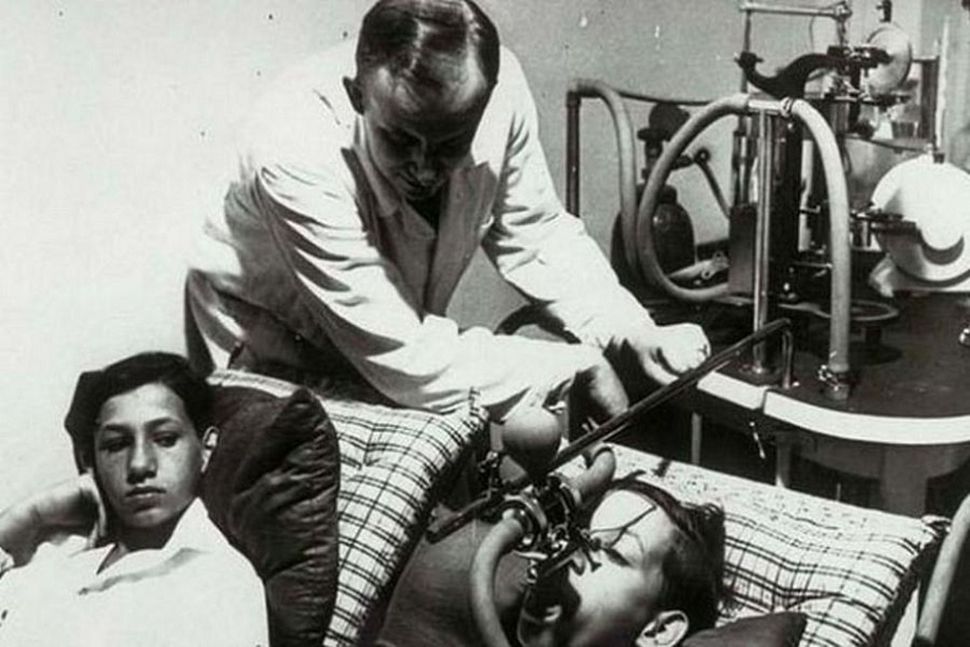 Josef Mengele, the Angel of Death Image by Yad Vashem

Joseph Mengele has always loomed large in my family. His name is often evoked at the family dinner table or on a Shabbat afternoon when we gather in my grandparents’ living room. No one wants him there — yet somehow he surfaces all the same.

Childhood sleepovers at my grandparents’ home evolved similar traits. To a large extent, these times were normal, filled with the unruly antics and sugar-fuelled shenanigans that only our parents’ parents embrace as endearing. But as fatigue set in and bedtime neared we would ask our grandmother to tell us the story about the Nazis, craving the frisson of a thrill that her diluted account provided. 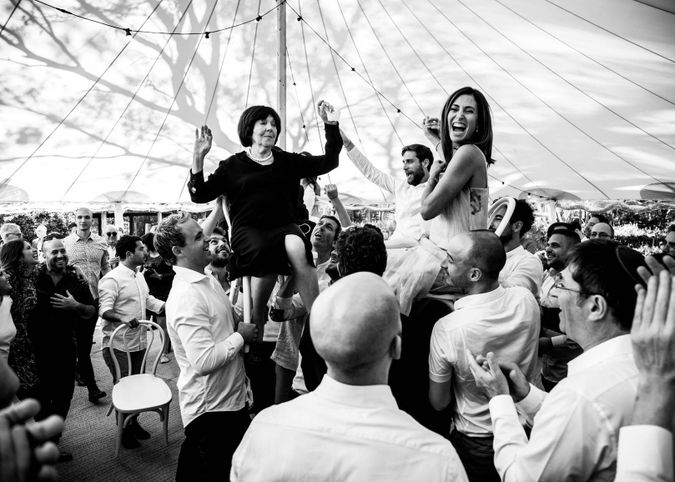 Eva at her daughter’s wedding. Image by Gabrielle Debinski

And so she would. My grandmother, whose name is Eva, would roll up her sleeve and direct my finger over her ink-stained skin, skin toughened not by old age, but by a stretch of time in the prime of her youth. She would tell us, delicately, about the salivating dogs (scary) and the menacing doctor (mean). For us kids, it was a captivating drama, filled with all the hallmarks of a strong narrative arc: peaks, plateaus and a satisfactory conclusion delivered in the form of a (partial) family reunion. But for my grandmother, it was another stop in a world coated in ash.

The sadistic doctor Joseph Mengele was my grandmother’s tormentor. Shortly after arriving at the Auschwitz death camp with her sister Marta — two years her junior — Mengele mistook the pair for twins, and sealed their place in what Irene Hizme, another of his victims, termed “the most exclusive club in the world.”

I thought little of my grandmother’s private and public advocacy of Holocaust commemoration and education; my ignorance was perhaps typical of the way youth often see adults as impenetrable creatures, immune from hurt or vulnerability. One time, however, a woman approached my grandmother after a community event and asked her — in a way that was more declamatory statement than question — if she told her story because of the catharsis it offered. My grandmother was dumbfounded and turned white as a ghost: “No,” she answered. “It does not.” I realized then that she did not open her wounds for us because it felt good or pleasing, but because she felt she had to. That was her burden to bear.

In her 2014 memoir ‘Gazing at the Stars’, my grandmother wrote, “Now that we, the last witnesses to the Holocaust, are approaching the end of our lives, I ask myself: is my survival a privilege, a reward, a punishment or a charging of great responsibility? It is all of those.”

The centrality of “Zachor”, the commandment to remember, in Jewish history reinforces this imperative to bear witness by bolstering victims’ voices and honoring their place in the shared Jewish narrative. The precept of remembrance is, of course, a moral and historical one. But it is also ingrained in religion, mentioned in the Torah over 200 times. For her part, my grandmother has never eschewed religious practice: she has said that although she does not always like God, she has never stopped communicating with a higher power. And so, she committed early on to embrace the act of memory in its fullest form — invoking not just the voices of victims, but the character of their killers.

That is why I needed no reminding that this year’s Yom Hashoah commemoration aligns with the 40-year anniversary of Mengele’s death. Dr Joseph Mengele, the genocidaire termed “The Angel of Death,” was notorious even within the bounds of Nazi ingenuity for mass murder. He was known to take other doctors’ shifts as selector-in-chief on the arrival ramp at Auschwitz, reveling in the role. And he experimented on my grandmother and others in ways that seem lifted from a dystopian novel. “To be a twin at Auschwitz meant to stay alive,” my grandmother wrote. “But at a cost.”

Shortly after arriving at Auschwitz, Eva and Marta were placed in the barracks reserved for the specimens of Mengele’s menagerie: twins, pregnant women, families with dwarfism, as well as people with varying disabilities. Naturally, they felt scared and abandoned. But Mengele’s unique brand of schadenfreude manifested in the sadistic games he orchestrated — “The Farmer Wants A Wife” is one game my grandmother still recalls. “We would stand in a circle, and Mengele would walk around us until he chose the Farmer,” she wrote. “The Farmer went into the middle of the circle. ‘Now, Farmer, you must choose a wife,’ Mengele would say, as if he were a schoolteacher. Whomever the Farmer chose was taken away for medical experiments, and seldom returned. Mengele made us choose.”

It wasn’t clear what happened to those who were chosen until one day my grandmother walked passed an ajar room; she crept inside finding it stacked with the dismembered body parts of those who had shared her barracks — and her hopes for a life beyond the fear.

Soon after, Mengele came for my grandmother and her sister. They were prodded with needles, injected with unknown substances (thought to be some sort of bacteria) and copious amounts of blood were drawn from their bodies to the extent that my grandmother entered a state of delirium. Years later, due to that, she was never allowed to breastfeed her own children.

They also witnessed Mengele perform the unimaginable on others. One time, young twins were sewn together in an attempt to create conjoined twins. They died of infection days later. Women had their babies ripped from their arms immediately postpartum. My grandmother recalls how Mengele taped the women’s breasts as an experiment to see how long their infants could live without food. Of about 1500 pairs of twins experimented on by Mengele, fewer than 200 individuals survived the war. 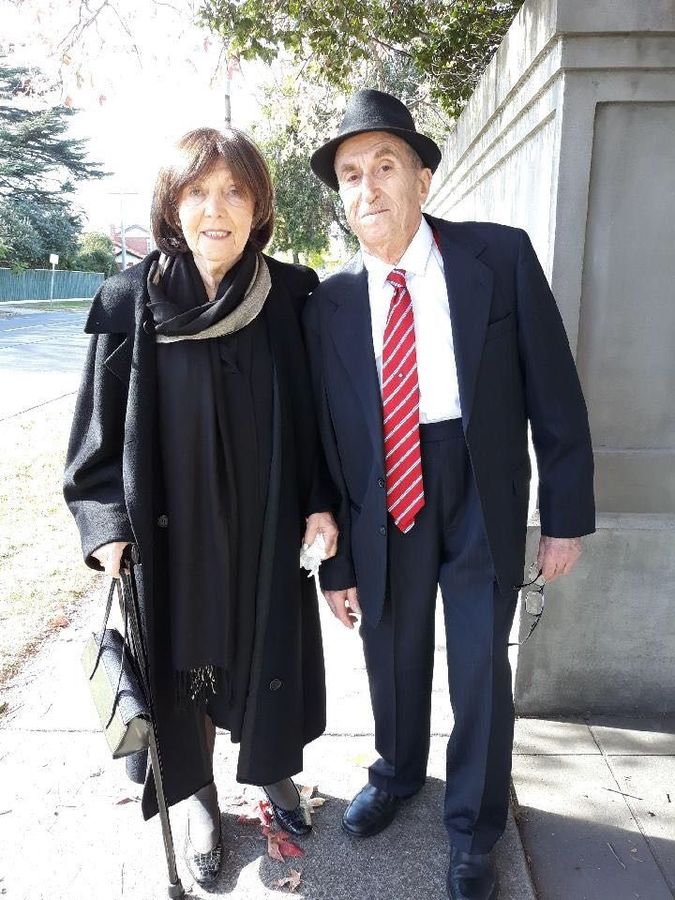 But it was the account of one of Mengele’s victims called Shmuel that developed into a tapestry of our family lore. Shmuel, a religious Jew with sidelocks, did not speak. He passed the time by swaying back-and-forth, either in prayer or a trance or both. One day, perhaps sensing that Mengele was coming for him next, the young boy approached my grandmother, who was 13-years-old: “He ran towards me with tears streaming down his face. His eyes, which until then had been faraway, were piercing, manic,” she wrote. “’I am nine years old and my time has come. Promise me that you will say kaddish for me. Remember this day, this date. Remember my name. My name is Shmuel.’”

My grandmother described the rush of fear and anguish that washed over her. She did not know the date required for the recitation of Kaddish; every day was another blurred point on one hellish continuum. She looked down at the numbers etched on her forearm: “A27201. This will be your kaddish.”

The late Elie Wiesel once said about remembrance: “It is a noble and necessary act. The call of memory, the call to memory, reaches us from the very dawn of history. No commandment figures so frequently, so insistently, in the Bible. It is incumbent upon us to remember the good we have received, and the evil we have suffered.”

Some 60 years after liberation, my grandmother and her husband donated a Kaddish Room in Shmuel’s memory at the Jewish Holocaust Centre in Melbourne, Australia, ensuring that the act of ‘Zachor’ binds us — her children, grandchildren and the community— to the memories that often become fragmentary with time passed.

“A27201 stays with me on my arm,” she said. “And each time I look at it, I’m reminded of Shmuel and all the other innocent victims who whispered kaddish with their final breath.”

Gabrielle works at The New York Times and previously worked at the Embassy of Israel in Washington D.C.

Growing Up With Mengele