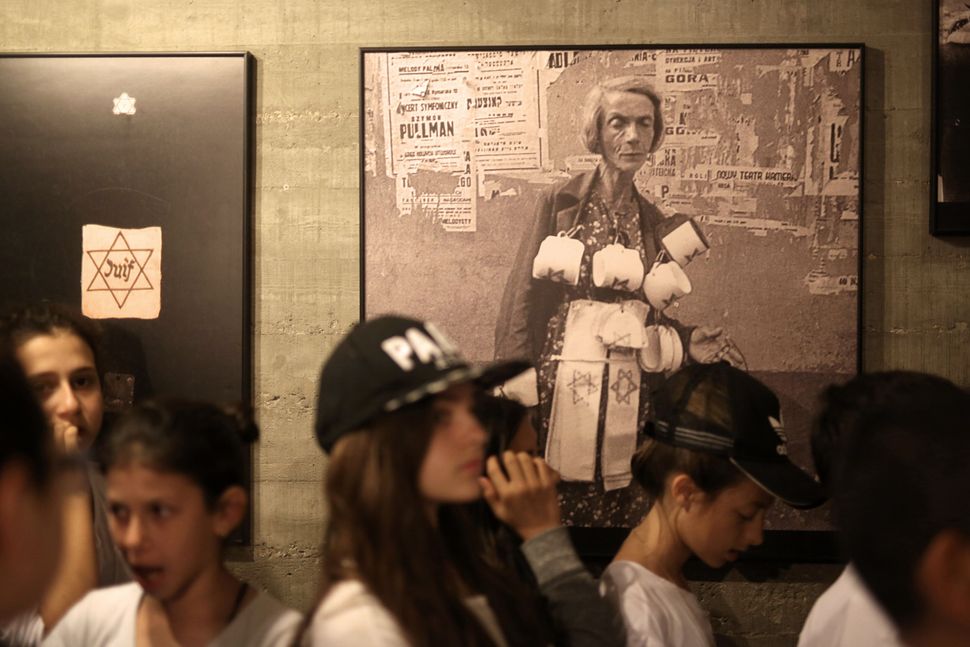 Israeli school children visit the “From Holocaust to Revival” Museum in Kibbutz Yad Mordechai in southern Israel on May 4, 2016 on the eve of the Holocaust Remembrance Day. Image by Getty Images

Growing up as a millennial in Montreal, I couldn’t escape the numbers. The cashier at the bakery had one. Our synagogue’s “candy-man” had one. Even my second grade Hebrew teacher had one. Today, they are harder to find.

The numbers loomed over our parents like a dark cloud — a relentless reminder of the devastation they were one generation removed from.

For us, they were background noise; if we paused, we could hear the cries. Otherwise, despite their ubiquity — or perhaps because of it — the Nazi nightmare mostly died while our own music didn’t. We were raised on a Nietzschean, life-affirming sensibility. We were taught to be forward thinking, rather than lodged in the past. Our parents infused us with pride rather than stoking a victimhood mentality.

Most of all, we knew that the antidote to our grandparents’ harrowing hell in Europe was the modern Jewish state. Only nine miles wide at its narrowest border, we celebrated the return to our ancient homeland while accepting the yoke of its accompanying responsibility—to be a light unto the nations.

Though muted, the numbers reminded us where we had been—the bottom of humanity. They silently gnawed at our conscience like the words read at the Passover Seder avadim hayinu, once we were slaves, now we are free. Now we have a homeland, an army to protect us, a place where we can proudly be Jews without fearing persecution.

Today, we are losing our numbers and with them, I fear, a lot more.

We are losing a collective subconscious. We are losing an understanding for the necessity of a Jewish state. For the American Jews who view the Holocaust as essential to their religious identification—a stunning 73% according to a 2013 Pew study—they are also losing perhaps, the core of their Judaism.

Neither Jewish identity nor nationalist aspirations can be rooted in the Holocaust. For, if the Holocaust is denied so, according to this storyline, is Israel’s existential right. And so is our very identity.

If the last generation of Jews was infused by current events – the Holocaust, the birth of the State of Israel, the Six Day War- today’s generation needs a deeper, macro reading of Jewish History.

A macro reading that pre-dates Golda Meir, Hitler, and even Napoleon.

For thousands of years prior to the 20th century drama, our traditions, texts and religious-nationalistic aspirations formed the glue of our people. Jewish identity was personified by collective customs and a shared vision. The Oral and Written law grounded us while a yearning to return home lifted our spirit.

From Mainz to Marrakech, the Land of Israel persisted as the promised land; the only territory the Jewish people called home. Modeled after the ancient Temple menorah, synagogue podiums were built facing the direction of the Temple Mount. Daily liturgy – even the blessing after a slice of bread — recalled Jerusalem. Personal and communal life centered around the Bible, where Zion is mentioned 669 times. Since King David’s kingdom, Jewish presence in Israel endured – despite being occupied by the Greeks, Romans, Byzantines, Crusaders, Muslims and Ottomans.

The remedy to a number-less world is not to betray Holocaust history, nor to betray the spirit of the revolution that was Herzl’s political program. However, a macro-historical reading of Jewish History is necessary. Textbook Judaism cannot begin with Eugen Duehring, nor can nationalistic aspirations begin with John Locke.

Before the Holocaust, before Lord Balfour, and even before Napoleon, there was a wandering nation self-identified as am yisrael. Even in exile — and perhaps because of it — it clung to the hope that one day, it would return home.

Each passing March of the Living is marked by fewer survivors returning to Auschwitz. For the first time in 70 years, a generation is emerging that will not remember seeing a number engraved on a forearm. The Holocaust will be but a vestige of textbooks, a discipline to be studied, questioned and refuted.

Every day another witness disappears. It is incumbent upon us to ensure that our history, purpose and utopian vision do not.