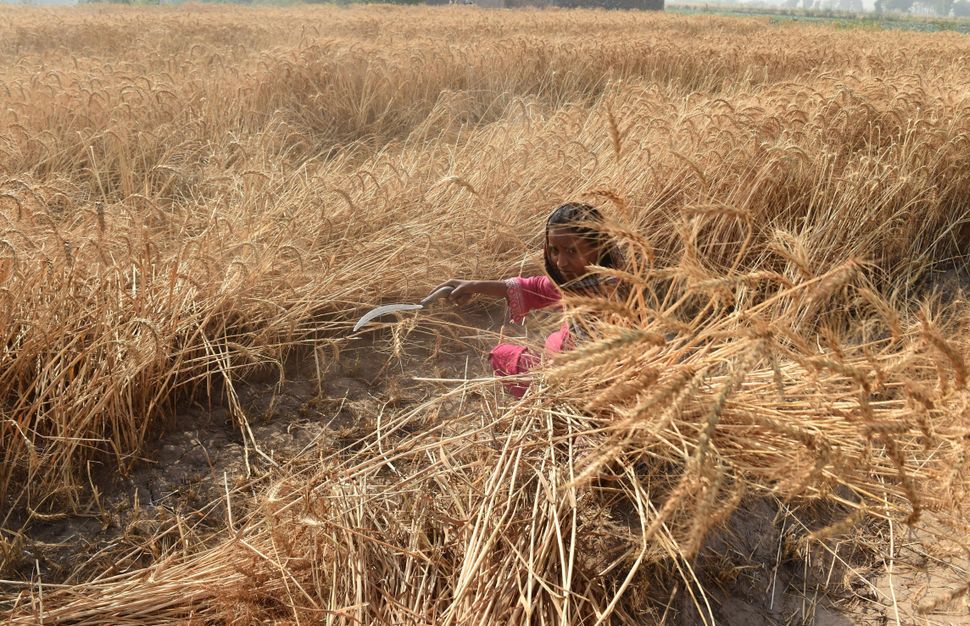 A Pakistani farmer harvests wheat in a field on the outskirts of Lahore on April 25, 2018. Image by Getty Images

There is no way to place the biblical Ruth in a box. A convert. A widow. A foreigner. A daughter in law. Every label that one might assign to her places her further and further from the center of the community, and more ingrained in the outskirts of Jewish society.

Yet, we all want to know who she is and what motivated her to make rather bold life decisions. How did a poor Moabite woman convert move up the ranks? All types of questions arise including that of psychology, the narrative of the text, and historical context: What can we learn from our Messianic Matriarch? Can we, or do we, see past the labels to create an inclusive community where those born in the margins need not remain there? The story of Ruth raises issues that are atypical from much of our biblical narrative, and Gleanings: Reflections on Ruth, a new anthology of modern commentaries on Ruth, edited by Stuart Halpern (Yeshiva University Press/Koren Publishers 2019), seeks to answer some of those questions.

Ruth is a biblical character who converted to Judaism and is widowed along with her sister-in-law, Orpah, and mother-in-law, Naomi. Rather then pack up and move home, she remains committed to the Jewish religion and community and Naomi. Ruth insists “Do not urge me to leave you [Naomi], to turn back and not follow you. For wherever you go, I will go; wherever you lodge, I will lodge; your people shall be my people, and your God my God. Where you die, I will die, and there I will be buried. Thus and more may the Lord do to me if anything but death parts me from you.” (Ruth 1:16–17 NJPS) Ruth cares for Naomi and per Naomi’s suggestion ends up marrying Boaz, a distant relative of her late father-in-law, a prominent member of the community. Ruth’s great-grandson is King David.

In Gleanings, several of today’s modern Orthodox biblical scholars — Rabbi Shalom Carmy, Simi Peters, Yael Ziegler, and Rabbi Saul Berman — use Ruth’s story to outline the biblical and legal requirements to be inclusive: We are required, by biblical law, to embrace converts. We are mandated to participate in agricultural commandments which provide food for the poor without shaming them.

In the Book of Ruth, the community and family embrace Ruth as one of their own. Consider how privileged Ruth is, in a way, despite being an outsider: She is provided with the basic necessities including food and shelter. She does not need to beg for financial support. She maintains strong relationships with her mother-in-law and other community members. She is invited to dine and eventually wed a prominent member of the community.

Reflecting on her story, in 2019, I am intrigued by Ruth — because I wonder how would her story translate in today’s world. Would Ruth be embraced? Would she be considered a suitable bachelorette worth of marriage? Would she have a place to live and food to eat? Would her conversion be considered kosher? Would she have problems trying to be accepted by the Rabbinate as a legitimate Jew?

In some ways it is easier to study Ruth’s story as a historical narrative, but ultimately, Gleanings challenges us to consider whether or not we are living up to the values of our foremothers and forefathers.

In one chapter, Rabbi Zvi Romm, one of a few dozen Orthodox American rabbis participating in the Beith Din of America’s Geirut Protocol Standards, a system that many would argue has served as a way to make Judaism’s conversion system exclusive, calls for a serious consideration of the laws of ahavat hager, loving the convert. In today’s Orthodoxy, those officiating conversions are subject to scrutiny.

In another chapter, Zev Eleff traces the history of the influence of the story of Ruth in American Jewish history, and yet, also provides us with a wake-up call in that today, this tale would be rather farfetched. After all, Ruth is not touted as emblematic, but rather as exceptional. Ruth may have sacrificed her homeland, finances, opportunities, and comfort in order to stay with her grieving ex-mother-in-law. Equally possible and somewhat likely from where I sit, Ruth was pretty desperate on her own and stayed in the Jewish community because returning to Moab was off the table.

While Ruth is clearly impressive, it seems to me that the community around her was exceptional by today’s standards as well. If Ruth were to enter a synagogue today, I’m not confident that she would have access to food, shelter, and familial and communal relationships. I am not confident that her conversion would not be called into question. We all can and should be the communities that embrace leaders of wisdom, integrity and boldness. By plugging Ruth as a superwoman, rabbinic commentaries may be glossing over the importance of communal inclusion.

After studying Ruth from the various perspectives offered in Gleanings, I was moved to return to the original text. I would encourage you to do the same — consider what we, in 2019, might do to recreate the community and climate that allowed Ruth, a Moabite woman, to become integral to the Jewish people.

Sharon Weiss-Greenberg is the director of development and communications for ELI Talks and director of donor relations at RAISE Advisors. Before making aliyah to Israel with her family, she served as the executive director of JOFA (Jewish Orthodox Feminist Alliance).