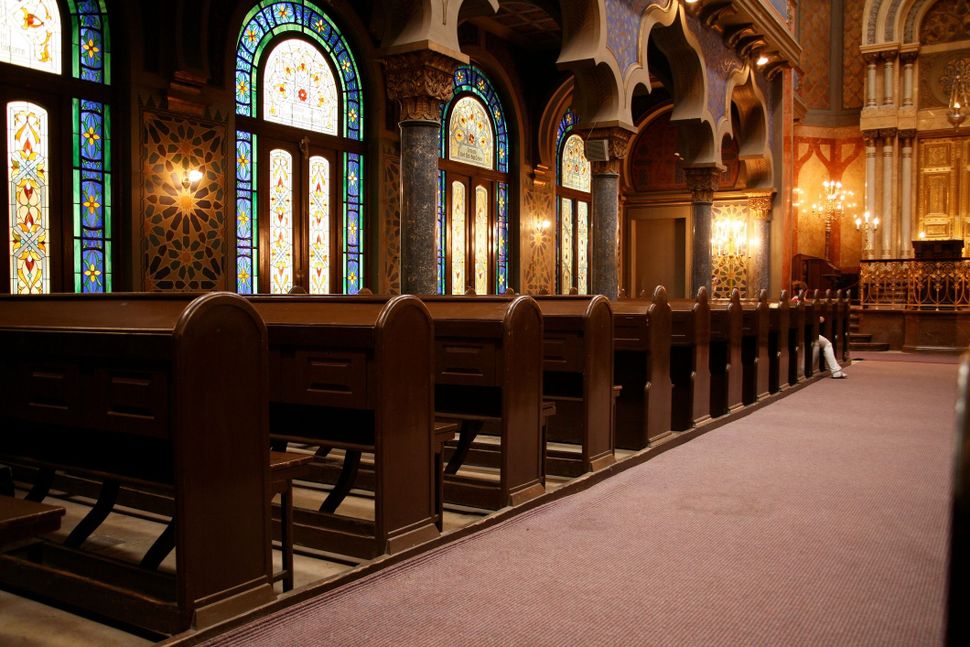 Several months ago, before it was to be sold to a Baptist church, the synagogue of my youth held a funeral, although the event was billed as a farewell ceremony.

The oldest synagogue in the state of Delaware, Adas Kodesh Shel Emeth (or AKSE), had made its home in a red-brick building on a major Wilmington thoroughfare since the 1960s. But it would soon become the New Mt. Olive Baptist Church, with “500 members and growing,” as my 89-year-old mother informed me.

That there was a church service going on in the smaller chapel was eerie enough, but then while sitting in the main sanctuary next to my 93-year-old father, I couldn’t really get my heart-heavy brain around the idea that I would never again sit across from this bimah, where I had watched my beloved Rabbi Leonard Gewirtz, of blessed memory, dispatch words of Torah in a long black robe, or hear the plaintive notes of the high holiday men’s choir, of which my father had been choirmaster, or where my husband and I had stood under a chuppah more than four decades ago.

As I sat listening to the speeches of AKSE’s bygone halcyon days by various 55-plus members, I looked at the plaque affixed underneath the blue-purple and orange slats of stained glass that said, “Women’s Seating.” What would the church folks make of that, I wondered?

Synagogues morphing into churches is not a new phenomenon. Jewish communities, like the suitcase-ready Jewish people, have historically been on the move, while their stone or brick structures persist. Especially in a place like Wilmington, Delaware, where people lived temporarily, on their way to larger cities and different jobs. During my childhood, when chemical companies were major employers, many Jews with doctorates came and stayed, for while or longer, helping to shore up the membership of the city’s three synagogues: the “traditional” one that my parents went to, the Conservative congregation where my maternal grandmother taught Hebrew school, and the Reform temple, which a few of my friends attended but which I hadn’t had any occasion to step foot into until I attended a bar-mitzvah dance there as a teenager.

So it’s no surprise that the membership in the three synagogues has been dwindling, as it has in so many other small Jewish communities across the country, as people leave, intermarry, or show little interest in synagogue affiliation. Lacking new and young members, and with its leaky roof and unused space, AKSE couldn’t afford to age in place.

So how do you give a eulogy for a shul building? That day, my last-ever encounter with my childhood syngagogue, I listened to once-young congregants offer up memories with the same straightforward generosity they had once conveyed in handing out Hershey bars to me and my fellow junior congregation members after a Bar-Mitzvah. A former Hebrew school principal nearing 90 talked about giving out candy to make learning sweet for students, a 60s-ish guy evoked memories of a former youth director and the Shabbat-oriented events he and his wife had crafted to keep us engaged in Jewish life, and my mother, a born performer and teacher, held the attention of the crowd with her recitation of the rich Jewish community life she had experienced growing up in Wilmington before and during the Second World War.

For more than 60 years, my parents’ lives have been intertwined with every aspect of the synagogue’s life, but nothing has given them as much raison d’etre as being the chief producers, directors, and stars of an annual community-wide Israel-Independence Day program, called Café Tamar. Mom has been the animated chorus leader, Dad the dancer par excellence, who once whooped during debkas. After the ceremony, a guy I had gone to elementary school with, one of the younger members, told me, “Your parents have given me such joy.”

That day, sitting next to my parents, I looked around at the packed sanctuary, at the lined faces I hadn’t seen for a long time, and thought of the reigning European immigrant elders of my youth—not only my bubby, my father’s mother, who had attended every Shabbos, but also the other Misters and Missuses with accents as thick as schmaltz, who had shushed me, kissed me, and watched out for me. “You look like your father,” they told me while praising my dimples. As these old Jews vanished, the congregation had diminished not only in its size but also in its straight-out-of-Anatevka character. “There will never be another generation like this one,” my mother said, throughout my childhood, when talking about these elders.

Near the end of the ceremony, when the cantor led the group in a song, “Adas Kodesh,” to the tune of “Anatevka,” all I could think of was: “What would my bubby have made of this?” Where else would Sabbath be so sweet, indeed?

During the farewell, my parents and others comforted themselves by repeating that a congregation is more than a building, which also happened to coincide with the discussion of that week’s Torah portion, Teruma, by Rabbi Jonathan Sacks, who wrote that “God dwells in people and not a building.” As for AKSE, starting the next Shabbat, the congregation would find a home in the building of the local Conservative synagogue, Beth Shalom, whose numbers, too, are waning. Wilmington’s Reform Temple, Beth Emeth, is also fading.

Still, that day, the congregation kept reiterating their determination to go on. As did my parents. “This year, CAFÉ Tamar will be in the JCC,” my mother said. “We already booked it.”
One month before our shul’s farewell, I had read of one synagogue, in the Rust Belt, going through a similar mourning process and even burying some of their artifacts. That congregation, sadly, had nowhere to go. But at least for now, I thought to myself, our shul has been given shelter.

The mood was somber at the conclusion of the ceremony, as a group of women and men who had been Torah readers, formed a processional and carried the Torahs out of the ark and the sanctuary as if readying themselves for a trip across the Sinai Desert. Who knew what their future and the future of Jewish life in Wilmington would hold?

“That was the most poignant moment for me,” my sister, who had flown in from Mexico, told me later.

But for me, that moment happened slightly earlier — some time between the rabbi’s speech and the first dirge-like notes of “Anatevka,” when I saw my mother reach out and take my father’s hand.

Marla Brown Fogelman is a writer now living in New York City. In addition to the Forward, her work has appeared in the The Washington Post, Tablet, Parents, and other national and regional publications.