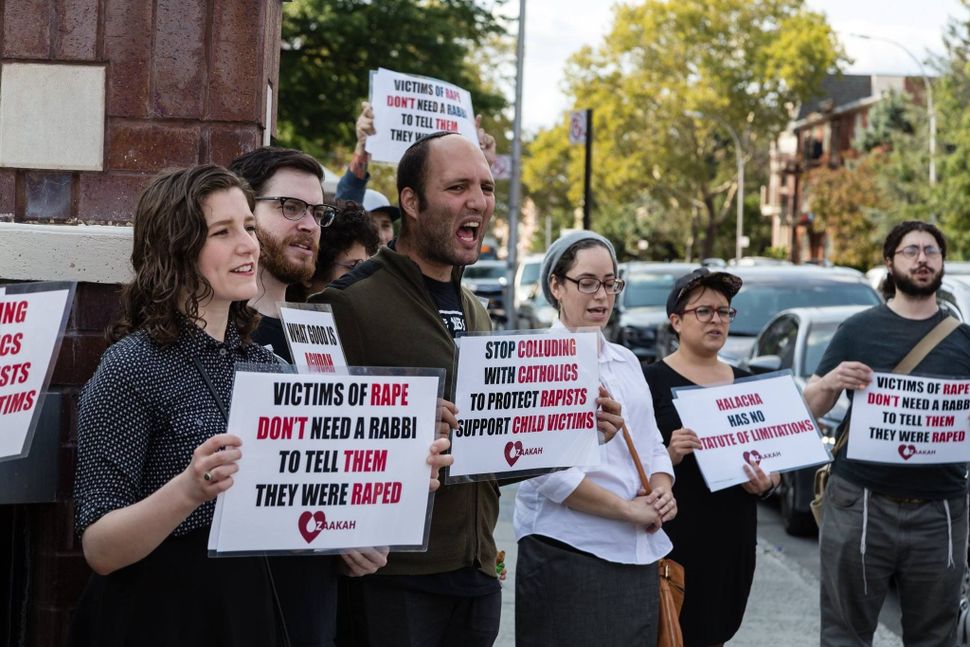 It used to be that the hardest part of my job was talking to survivors — as director of community organizing for ZA’AKAH, an organization dedicated to advocating for survivors of child sexual abuse in the Orthodox Jewish community.

They’d call me up, tell me their horrific stories of being abused by relatives, acquaintances, or teachers, and how the community covered it up, and in most cases there was nothing I could do for them. The conversation would end when I asked them their age because invariably they were over age 23 and therefore barred by New York’s statute of limitations from seeking justice. “If you want, I can help you find a therapist,” is not what they were calling me to hear.

After 13 long years however, New York’s survivors of child sexual abuse are finally getting justice.

On August 14th, the Child Victims Act was passed, reviving cases previously time-barred by the statute of limitations. While this is significant for survivors and institutions across the state, it is of particular significance to the Orthodox Jewish community.

For decades now, advocates in the community have been fighting with community leaders to even have child sexual abuse acknowledged as a problem in our community. Too often, survivors of child sexual abuse have been cast as liars, opportunists, angry malcontents with axes to grind. With the opening of this window, the survivors who for far too long have been silenced and shunned will be able to publicly tell their truth and expose the abuse and coverups rampant in our community.

What has made it particularly difficult for Orthodox Jewish survivors to come forward is a pervasive communal attitude that informing on a fellow Orthodox Jew to the secular authorities (mesirah) is a crime worse than the alleged abuse. Rabbis tell us that we are obligated to ask them for permission before reporting sexual abuse. Agudath Israel, which lobbied fiercely against the Child Victims Act, has since 2011 maintained that as their officially stated policy. Many people who have nonetheless come forward, braving the inevitable backlash, have lost their jobs and homes, their children have been expelled from their schools, and many have experienced a complete ostracism from their communities.

With the opening of the lookback window, however, we as a community will have the opportunity to truly reflect on the crimes we’ve enabled, and commit to meaningful change. Already lawsuits are being filed against many major institutions across the Orthodox Jewish community, from the Modern Orthodox Yeshiva University to ultra-Orthodox Hasidic institutions. The survivors filing those lawsuits are well aware of the social costs of their actions, but they’re nonetheless pursuing justice because for them, living without it is not an option.

Survivors of child sexual abuse often struggle with depression, addiction, self-harm, eating disorders, difficulty forming and maintaining healthy relationships, PTSD, anxiety disorders, and suicidal ideation. That’s been no different in the Orthodox Jewish community, it’s just been well hidden. Survivors who struggle with addiction, or question their faith, or underperform at school, or suffer from mental illness are often discarded by the community, blamed for these issues they face as though they’re deliberate unprovoked rebellions, rather than recognizable reactions to trauma, and once othered by the community, no longer considered the community’s responsibility.

Well, now, we’re afforded an opportunity. The lawsuits are coming whether we like it or not. The truth will be in the media whether we want it to be there or not. Institutions will be paying out settlements and judgements whether they want to or not. Whereas the community was previously afforded an undeserved boon by New York’s former statute of limitations for child sexual abuse, which cut off a survivor’s access to justice at age 23, allowing community leaders to exert pressure on survivors until they reached that age and then breathe easy knowing they’d gotten away with it, that’s no longer the reality in New York State.

The Child Victims Act, aside from opening this one-year lookback window, extended the criminal statute of limitations for child sexual abuse to age 25 for misdemeanors, and age 28 for felonies, and extended the civil statute of limitations to age 55. While rabbinic leaders may have previously been successful in coercing survivors into silence until age 23 — by threatening their marriageability, their parents, their placements in schools — will they be able to maintain that stranglehold when survivors have until age 55 to file a civil suit going forward?

We as a community can either resist this change and fail, losing not only money but any shred of respectability and credibility we have as a moral, God-fearing, Torah-observant community — or we can take this opportunity to stop supporting abusers, stop coercing victims into silence, accept that we’ve sinned grievously, make reparations to the survivors of these horrific crimes, commit to supporting them in the future, and never again allow institutional or communal concerns come before the fundamental safety and wellbeing of our children.

The choice is ours.

Asher Lovy is the director of community organizing for ZA’AKAH, an organization dedicated to advocating for survivors of child sexual abuse in the Orthodox Jewish community.