Jewish Baby Boomers Are ‘Rewiring,’ Not Retiring — Through Synagogue Life 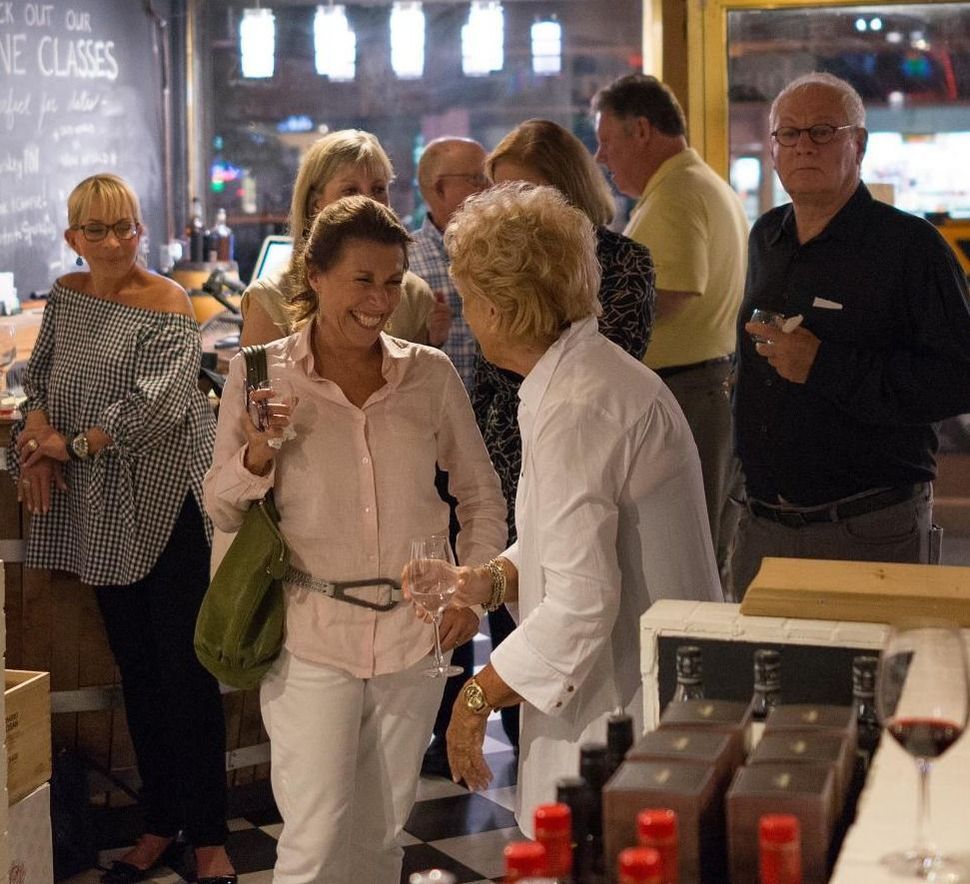 The Judaica books stacked on David Goodman’s nightstand are ones he’s intended to get around to reading for decades now, but a little thing like a 40-year career got in the way.

Now that he has reached his sixties, Goodman, a retired journalist who lives in a Philadelphia suburb, said he finally has the luxury of fully immersing himself in those texts. Goodman is in his fifth of a six-year rabbinical program at Reconstructing Judaism, the core institution of the Reconstructionist movement located in Wyncote, Pennsylvania. Having spent years as a lay prayer leader, Goodman decided to seek a second career in the rabbinate.

“On one hand, you are at a stage in life where you have already raised your kids and if you did not take on student debt from their college education, there is a release from that (financial burden),” said Goodman. “But when I finish my rabbinical degree, I do expect to find work that pays, either teaching as an adjunct professor, or taking a part-time job in a chaplaincy role. I’d like to earn money to spoil my grandchild. Basically, this is a point in my life where I am lucky to get the chance to do the things I have always wanted to do.”

Goodman is part of a growing population of older Jewish adults who are devoting this chapter of their lives to Jewish and congregational life — Jewish involvement extends far beyond the bnei mitzvah years or even the years raising children.

The typical American Jews of retirement age may have not completely stopped working, but instead may have sold the family house, relocated to more urban or warmer surroundings, and are looking to keep engaged in Jewish life. They continue to affiliate with synagogues while their younger counterparts choose not to, or they are taking on second or third careers such as teaching religious school, composing Jewish music or studying to become rabbis. As the elders of their family tree, more and more Jewish grandparents see themselves as a vital part of their grandchildren’s Jewish upbringing. 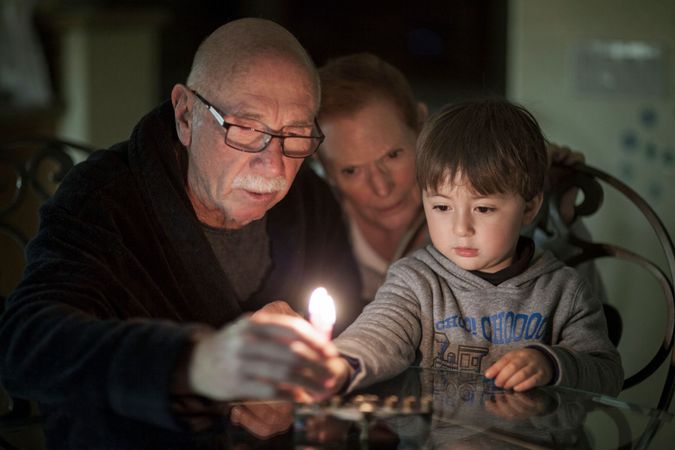 In a soon-to-be-published, first-ever study of Jewish grandparents by the Jewish Grandparent Network (JGN), the organization surveyed nearly 8,000 individuals who self-identified as Jewish, lived in the United States, had at last one grandchild under college age and were between the ages of 55-80.

JGN co-founder David Raphael of Atlanta, Ga., said the survey revealed that 41 percent were affiliated with a synagogue, more than half have an annual income of $100,000 or more and 30 percent have an income of $150,000 or more, making them able to support their grandchildren by helping to pay for day school, trips to Israel or Jewish summer camp.

“Our survey also showed that it is the grandparents who are taking their grandchildren to synagogue, making the Shabbat and holiday dinners and transmitting Jewish traditions to the next generation,” said Raphael. “We did this survey because (JGN) felt we needed quantitative data on the role of grandparents in Judaism. Often, the focus of the Jewish community outreach is geared towards young adults and families with young children and there is a lack of recognition of the role that Jewish grandparents play in promoting Jewish values.”

Rabbi Rachel Ain of the Sutton Place Synagogue in Manhattan is seeing a growing demographic in her congregation’s membership of empty-nesters, of couples who have raised their children in the suburbs are selling their homes and moving into the city. They may still be working, but would rather spend their time enjoying city life rather than commuting. Part of that is creating new Jewish community with their peers — which was what the synagogue created with the “Boomers Community”, or “BOCO.”

“We do our best to pair new members with their peer groups, and with the boomer generation is where we have seen the growth and involvement,” said Ain. “BOCO members create a new community in a synagogue where they did not raise their own children. But they come together to socialize, have Shabbat and holiday meals, and comfort each other by making minyan to say Kaddish when a loved one has died. And by taking up leadership roles and attending services this way, they are modeling for their own grown children: Involvement in synagogue and Jewish life is a lifelong journey.”

Graphic designer Judy Agata said she and her husband love spending time with their BOCO friends. When so much outreach is given to young Jewish adults or couples with small children, BOCO has filled a void.

“Now that my husband and I are in our 60’s, we finally have a group of friends we know at synagogue to go to services with on Shabbat and the High Holidays,” said Agata. “BOCO has been a fantastic support network. It was important for us to create this circle of friends of our age group. Like any age, you tend to go to services or attend synagogue programing more when your friends also go.”

Out in the suburbs of New York, Rabbi Jerome Blum of Temple Isiah in Great Neck thinks that synagogues, with dwindling affiliation among Jews in their 20s or 30’s, need to grow outreach to older generations of Jews who remain involved in Jewish life.

“Jewish Americans have to rethink what ‘young’ means,” Blum said. “Outreach educational organizations in New York city and Los Angeles are great at engaging young adults. But we also have to engage and redefine who we are talking about when we say younger people. And at our congregation, younger couples are in their 50’s through their 70’s. We need to find new portals into synagogue life and Jewish living even after children have grown and moved away.”

Dr. Ora Horn Prouser, an academic dean at the Academy for Jewish Religion, said this quest for pursuing a rabbinical degree later in life is all about filling one’s time with meaning. While there are still young rabbinical students, AJR is increasingly in tune to a number of applicants who are looking for a second or even third career change. The school’s oldest student, a retired lawyer, began the rabbinical program at age 75.

“A second career happens at many times in a person’s life,” Prouser said. “What we are seeing in our students who are taking on rabbinical school in their retirement is that finally, they have the opportunity to do what they have wanted to do all along. Our older students have the luxury of time and stability to accomplish what they for years thought could only be a dream.”

At Temple Anshe Shalom of Delray Beach, Fla., all of Rabbi Rafael Adler’s congregants are retirees. He sees many of his congregants using their “golden years” to give back to their Jewish community.

“It is heartwarming to know that for retirees, a synagogue remains a place to come to connect with others even after their children are grown and out of the house. Our congregants are not joining because they have young children who need an education and need to have a bnei mitzvah ceremony. They are here because they want to be here, to be with other Jewish people for companionship and friendship.”

Rick Dinitz of Palo Alto, Calif., who retired just months ago from a 30-year career in technical writing and now has the time to deepen his passion of Jewish song leading, composing and recording Jewish music. For years, Dinitz has studied the art of creating intentional chants based on Jewish liturgy and is now dedicating his life’s work to a project he calls Mussar Blues.

Dinitz says his days creating and recording this genre of Jewish music are busier than ever. “Jewish community has always been a priority for my wife and me,” said Dinitz. “We’ve been regulars, active participants, life-long learners, and teachers. We can hardly imagine life without a synagogue community at the center of it. The shul is our second home. Retirement won’t change that.”

Dinitz said the seeds of his “rewirement” were planted in 2005 when he began his studies at The Mussar Institute. There, he learned about the power of repeatedly chanting a phrase aloud, with focused attention and emotional intensity to engrave it on one’s heart.

“This type of mastery takes time and dedication,” said Dinitz. “I’m grateful for the ability to do that. I’ve dedicated the next chapter of life to this ‘rewirement’ project. Synagogue and Jewish community are so important to us that it’s unlikely our involvement would decrease. Is there room for even more involvement? Nichyeh v’nireh—with God’s help, we’ll live and we’ll see”.

Stacy Gittleman is an award-winning freelance journalist based in Detroit. She blogs at http://www.stacylynngittleman.com and has also been a Jewish educator from preschool to high school. She can be reached at [email protected]

Jewish Baby Boomers Are ‘Rewiring,’ Not Retiring — Through Synagogue Life