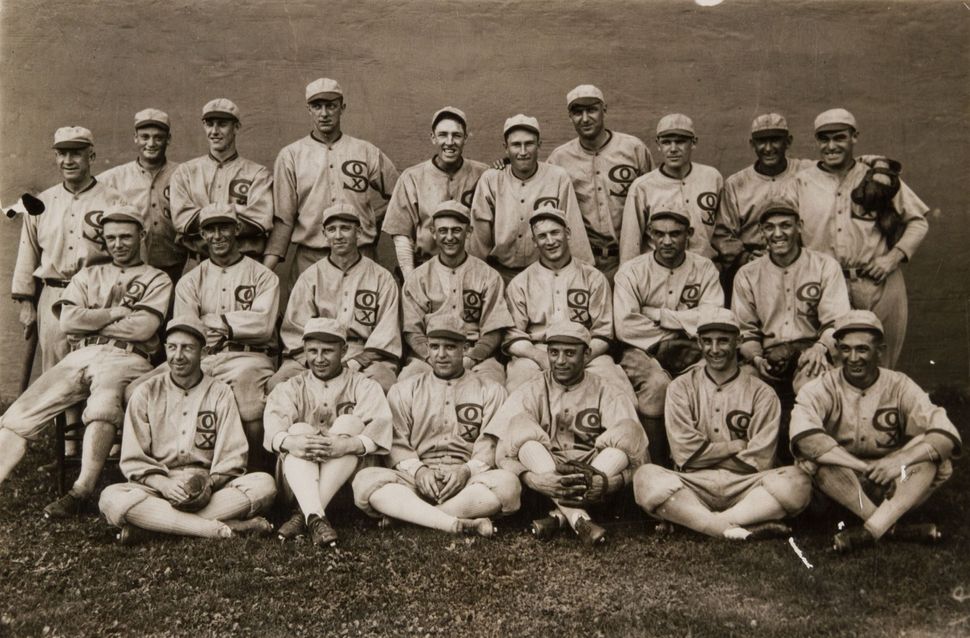 With the arrival of the Jewish penitential day of Yom Kippur alongside baseball’s postseason, it is fitting that we also mark the 100th anniversary of baseball’s original sin — the “Black Sox” scandal.

In October of 1919, eight White Sox players conspired to throw the World Series against the Cincinnati Reds. In the century since, the scandal has achieved almost mythic status; it figures in “The Great Gatsby,” “The Godfather,” “The Natural,” and “Field of Dreams,” to name just a few. Whether or not a child ever actually said, “Say it ain’t so, Joe” to Shoeless Joe Jackson outside the courthouse (which he didn’t), the scandal continues to speak to fundamental questions regarding sin, forgiveness and moral responsibility.

First: The nature of sin. More often than not, retrospectives on the scandal make an implicit or explicit gesture towards justifying the actions of the players. The miserly White Sox owner, Charles Comiskey, underpaid his players and got rich off their talents. The eight players on the take were just doing what everybody was doing. As ringleader Charles “Swede” Risberg revealed years later, everybody knew about other prior rigged games. The World Series may have been a difference in degree, but not in kind.

Such arguments are not new. Ever since Adam blamed Eve in the Garden of Eden, human beings have sought to deflect guilt for their own failings. We blame others, we blame the world in which we live, most often we blame our own humanity – we blame anyone or anything to avoid taking responsibility for our actions.

Such excuses run contrary to the central premise of Yom Kippur. The fundamental basis of Jewish ethics is that human beings have moral agency. Sometimes we make good choices and sometimes we make bad choices; but it is our very ability to choose that makes us human. Yom Kippur serves as a bold challenge reminding us that our mistakes belong to nobody but ourselves, and yet, if we so determine, we can rise up to our potential by choosing a new path forward.

Second: The nature of forgiveness. To his dying day, third baseman Buck Weaver sought to clear his name and be reinstated to baseball – a campaign that his descendants have continued. Was it just to ban these players for life? How does one measure the gravity of sin? How does one determine the proportionality of punishment? And if, as we would all hopefully allow, people are capable of remorse and repentance, then how do we determine when forgiveness is merited?

Certainly, there are sins and sinners that are beyond redemption. We should all be grateful that we live in a time when people’s misdeeds, no matter their power, celebrity, gender, wealth or religious stature, are no longer brushed under the rug. But what about the more quotidian domains of our lives? The friend who let you down, the co-worker who broke a confidence, the family member who fell short of expectation. Do they stay benched forever? If someone has expressed remorse and paid their debt, then when exactly do they get another swing at the plate? Of all the challenges of Yom Kippur, perhaps what’s most difficult is not the asking of forgiveness, but the granting of forgiveness to those who seek it.

Third and finally: Moral leadership. Just shy of two years after the thrown World Series, all eight players were acquitted of criminal charges. But a day after their acquittal, baseball Commissioner Kenesaw Mountain Landis banned them for life. Regardless of the legal verdict, he said, “No player that sits in a conference with a bunch of crooked players and gamblers where the ways and means of throwing games are planned and discussed and does not promptly tell his club about it, will ever play professional baseball.” For Landis, the moral bar was much higher than whether a player did or didn’t participate in the fix. The mere knowledge of wrongdoing and failure to report or take action was enough to disqualify a player forever.

Rabbi Abraham Joshua Heschel taught: “In a free society, some are guilty, but all are responsible.” In both the public and private sector, ours is an age when willful ignorance abounds, an era in need of more, not fewer whistleblowers. It is not enough to believe ourselves innocent because we are not guilty. Yom Kippur calls us to account for sins of both commission and omission – one of which being the failure to speak out. Yom Kippur reminds us that we are all moral contributors to our world.

Sin, forgiveness, moral leadership – the Black Sox scandal continues to resonate because it is a morality tale about the human condition – about the issues we all grapple with day to day and year to year. And yet like baseball itself – Yom Kippur comes with the redemptive reminder of all that once was good and could be again.

Correction: An original version of this article stated that Yom Kippur falls alongside baseball’s “pennant race” — it in fact coincides this year with baseball’s postseason.